Accessibility links
Project's Promise Of Jobs Has Appalachia Seeing Stars Pennsylvania, Ohio and West Virginia are waiting to hear which state Shell Oil will pick to host a huge new chemical refinery. The project would turn ethane gas, produced through "fracking," into ethylene, which is used to make plastics. The venture could be the biggest investment in the region in decades. 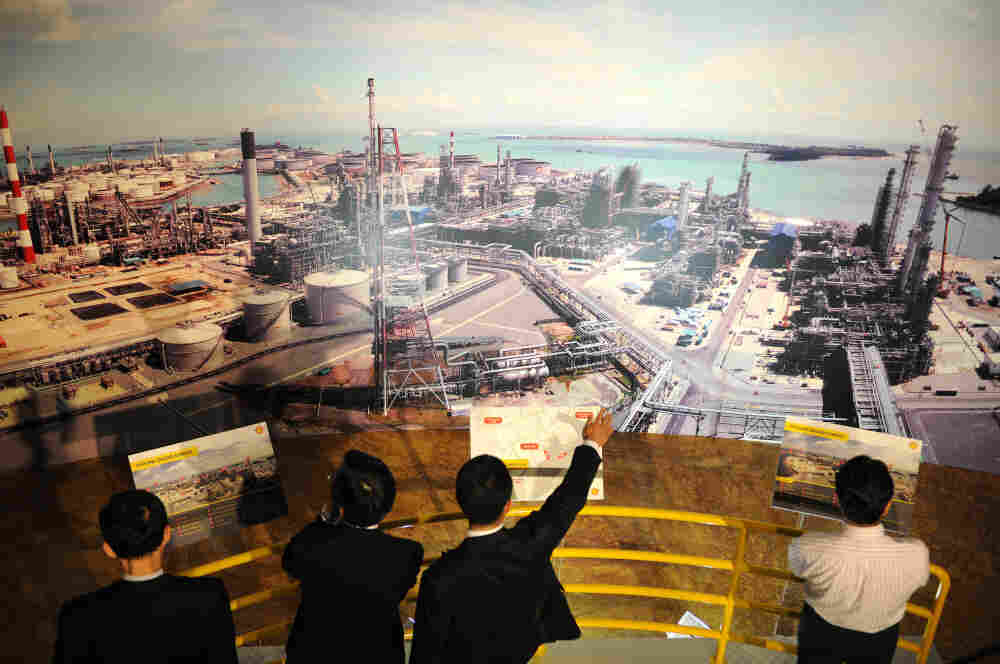 Visitors view a photo montage of Royal Dutch Shell's Ethylene Cracker Complex during its opening ceremony in Singapore in 2010. The company is expected to announce plans soon for an ethylene cracker plant in Ohio, Pennsylvania or West Virginia. Munshi Ahmed/Bloomberg hide caption 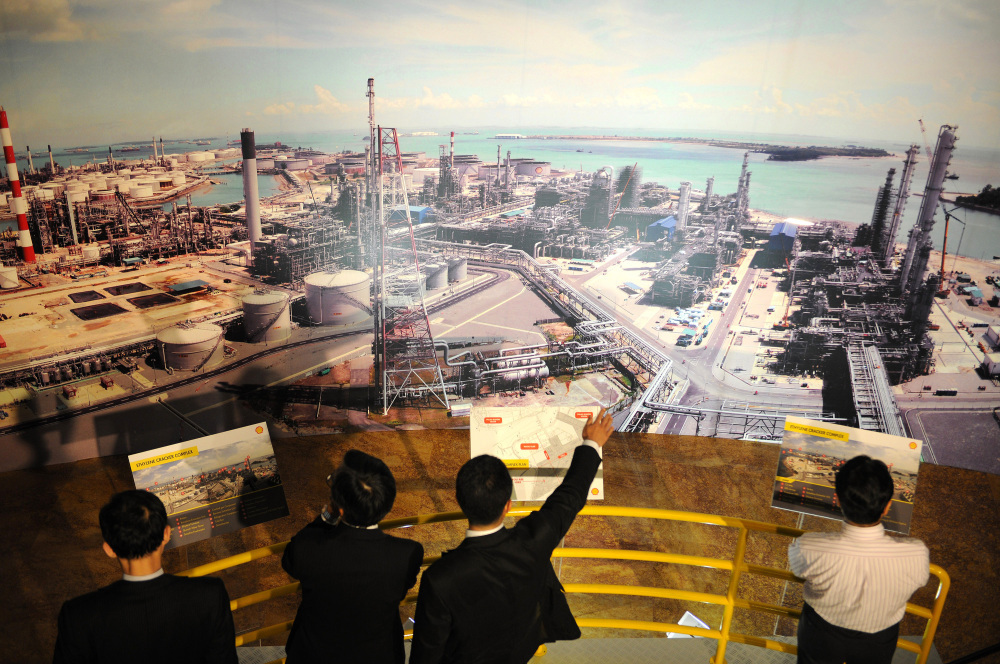 Visitors view a photo montage of Royal Dutch Shell's Ethylene Cracker Complex during its opening ceremony in Singapore in 2010. The company is expected to announce plans soon for an ethylene cracker plant in Ohio, Pennsylvania or West Virginia.

Ever since the collapse of the domestic steel industry, blue-collar workers living in the mountain towns near the border of Pennsylvania, West Virginia and Ohio have struggled to find jobs.

But last June, Shell Oil Co. announced it would build a huge petrochemical refinery somewhere in that Appalachian region. The plant, known in the industry as a "cracker," could bring billions of investment dollars and thousands of jobs.

In Wheeling, W. Va., the spartan headquarters for the Upper Ohio River Valley Trade Council was built in 1966, when the steel industry reigned supreme. But unemployment soared when the mills started shedding workers.

What Is Chemical Cracking?

Chemical cracking is not a new process. But energy companies are now considering building cracking plants in places like the Western Marcellus and Utica Shale regions in the Northeast, where it would not have been economically feasible before. Here, Case Western Reserve University geologist Beverly Saylor explains the process of cracking chemicals:

The reason you'd want to make ethylene is that it's a component of plastics, so HDPE and LDPE and PVC — all those things that you put into your recycling bin — are made partially out of ethylene. Essentially, we crack ethane to make ethylene to make plastic.

Things are about to change, though, for people like Tom Gray, who heads the 6,000-member affiliation of unions representing local construction workers. All anyone wants to know is where Shell might build an ethane cracker.

"There's a tremendous work ethic in this valley," Gray says. "People, you know, they're struggling. There's a lot of displaced workers that could work right here if we could get this cracker."

A New Place For Plastic Production

"Cracker" is industry lingo for a plant that takes oil and gas and breaks them up into smaller molecules. An ethane cracker creates ethylene, a compound used in the manufacture of plastic. There's much more ethane in Appalachia these days thanks to controversial drilling techniques known colloquially as "fracking."

Beverly Saylor, a geologist at Case Western Reserve University, says it has been awhile since companies looked to build new crackers in the U.S.

"Plastic was made overseas, and that's because there wasn't enough natural gas," she says. "But now with all the shale gas development, the price has come down on that, and so it's now worth it."

Construction of a cracker facility could cost several billion dollars and employ as many as 10,000 construction workers at its peak. Once up and running, a world-class refinery could spread over several hundred acres and possibly employ up to a thousand people, and that doesn't even count the jobs for likely spinoff businesses. It's enough to have state officials seeing stars.

"Potentially, it would be the biggest investment made in the Pittsburgh region in economic and industrial development since Andrew Carnegie built U.S. Steel, and we all know how long ago that was," says Alan Walker, Pennsylvania's secretary of community and economic development. "I mean, it's a game changer."

Walker says a cracker would have a huge multiplier effect on jobs in the manufacturing and chemical industries. Ethylene is used in 90 percent of manufactured goods. Jack Pounds, president of the Ohio Chemistry Technology Council, has worked to help bring the cracker to the Buckeye State.

"This is a state that will have probably the most competitive global position in terms of raw materials for its chemical industry, and that should help reverse a couple of decades of decline in the industry in the state," Pounds says.

All three states have sent delegations to Shell to pitch locations for the ethane cracker. Details on tax incentive packages are still not being discussed publicly.

Scoring the cracker would be a coup for any governor, especially when jobs are such a hot political issue. Keith Burdette, commerce secretary for the state of West Virginia, says in the end the ethane cracker will provide jobs throughout Appalachia.

"There'll be a lot of hooping and hollering regardless of where it's picked, whether it's in West Virginia or Pennsylvania or Ohio. We want it built here," he says. "The truth of the matter is the sites [are] just so closely grouped together that the impact across state lines will be significant."

Shell is expected to announce its location for the ethane cracker soon. State officials hope the cracker will take the Marcellus Shale's natural gas industry to the next level — one where gas and oil extracted from the ground can be processed and used by a new generation of businesses in Appalachia.