Accessibility links
Critics See 'Disaster' In Expansion Of Domain Names The agency that governs domain categories like .org and .com is forging ahead with plans to sell new names despite some vocal opposition from regulators. For a registration fee of $185,000, applicants could register a suffix like .music or .Nabisco. But that could lead to problems, opponents say. 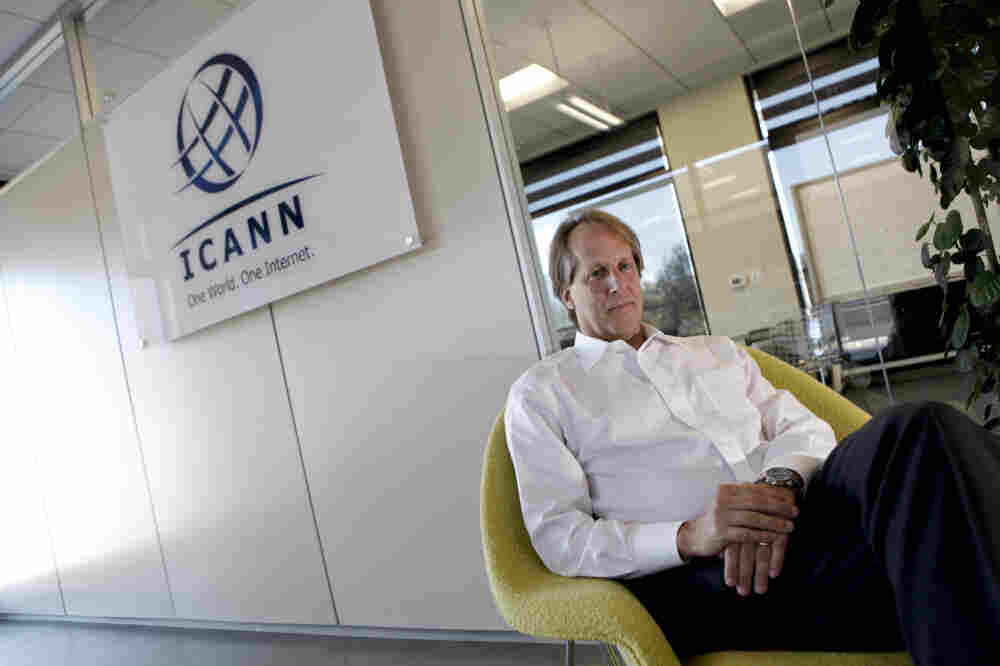 Rod Beckstrom, chief executive officer of the Internet Corporation for Assigned Names and Numbers, or ICANN, says the group's plan to sell more specific domains could bring "more clarity [and] more quality" to the internet. The Federal Trade Commission has raised concerns about the plan. AFP/Getty Images hide caption

Vast new tracts of the Internet are up for sale as of Thursday. The Internet Corporation for Assigned Names and Numbers, known as ICANN, is forging ahead with plans to sell new domain categories despite some vocal opposition from regulators and advertisers.

Forget .com or .org — for a registration fee of $185,000, applicants can register a new suffix like .music, or perhaps a brand like .NPR. If you think of the Internet as virtual land, new continents are now on the block.

Currently, there are 22 generic domains like .net or .gov. Under the new program, as many as 1,000 new ones could come to market every year. Applicants must qualify and pass ICANN's various criminal and other background checks.

The Internet Corporation for Assigned Names and Numbers — ICANN — governs domain names. The first seven were introduced in the 1980s:

Subsequently, more were added by ICANN:

Beckstrom says this move will make the Web more global, allowing, for example, other cultures and countries to use non-Roman character systems in the suffix.

"They should have that right, and who are we to tell them, 'No, you don't have the right to have Chinese characters in the top-level domains,' " he says.

In May, ICANN will publish a list of all the proposed domains. One can imagine .food or .hotels making that list. Although, for example, .Nabisco or .Marriott could also appear. Opponents will get 60 days to file objections.

As for finding your way around the new and expanded Internet, Beckstrom says he doesn't expect this to add to the complexity. He says that if you're able to go directly to a specific .brand, you'll know you're at that site. "So there's actually an argument that in some ways this new program could add more clarity, more quality and security to some aspects of the Internet," he says.

Beckstrom says ICANN deliberated this move for six years and will take steps to protect brand names. Besides, he says, there is demand for the new domains.

But Jon Leibowitz, chairman of the Federal Trade Commission, disagrees.

"My sense is that a lot of this demand is just absolutely artificial and largely imagined by the ICANN board," Leibowitz says. "We're an agency that's required to protect consumers, and from our perspective, this is a potential disaster and we have an obligation ... to speak out."

We're an agency that's required to protect consumers, and from our perspective, this is a potential disaster and we have an obligation ... to speak out.

Last month, the FTC sent ICANN a long letter detailing its concerns, including the potential for an exponential increase in phishing and other fraudulent Web-based scams. But as a nongovernmental global nonprofit, ICANN does not fall under the legal jurisdiction of the FTC or any other government agency.

Leibowitz says he is not assured by ICANN's pledge to self-police or its promises to protect companies from brand infringement. The group's existing database of website owners, Leibowitz says, already poses problems to law enforcement.

"[There are] websites registered to God, to Mickey Mouse, to Bill Clinton," he says. "And of course, if you're a scammer, if you're in the business of ripping off consumers, why would you give accurate information?"

"All that money is just wasted money because it's money thrown away to property rights that will never be used, never add to competition, never add to innovation, never do any of the things that ICANN is touting will be the great benefits of all these new top-level domains," Wood says.

He says companies will have little recourse but to sue. But ICANN won't be able to undo the damage, he says: "How are they going to compensate all the brands and the consumers who have been harmed because they went pell-mell into a new system that ... didn't, in fact, work?"

For now, ICANN is just taking applications. The first of these new domain names are expected to start popping up in browsers early next year.