Accessibility links
Viral Images, The Military's Recurring Nightmare A video appears to show Marines desecrating the corpses of Taliban fighters killed in Afghanistan. It once again raises questions about why troops take such images, and what the military can do to stop it. 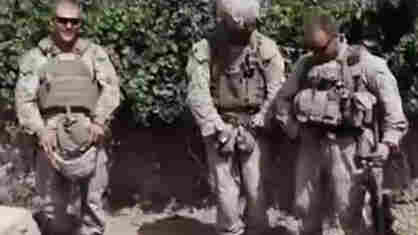 A still frame taken from a YouTube video purportedly shows Marines who desecrated three dead men thought to be members of the Taliban in Afghanistan. YouTube hide caption

The U.S. military says it's investigating a video that appears to show Marines desecrating the corpses of Taliban fighters killed in Afghanistan. Regardless of those findings, the outrage in the Islamic world is likely to be severe, as with other disturbing images that have surfaced during U.S. wars in Muslim countries over the past decade.

The short video that went viral on YouTube, TMZ and other sites shows four men in Marine Corps combat gear urinating on three dead bodies, at least one of them bloodied. One member of group can be heard saying, "You got it on the video?"

The episode revived memories of other troubling images of war that have gone viral in recent years, like the photos of U.S. forces abusing prisoners at the Abu Ghraib prison in Iraq.

As the military went into damage-control mode, the case also raised a host of recurring questions. Why do troops take such images and pass them on? How much damage might the video cause in Afghanistan and elsewhere in the Muslim world? And what, if anything, can the military can do to prevent this from happening again?

A Marine spokeswoman told reporters that officials haven't been able to verify whether the people shown in the video were Marines, but she said their actions were "not indicative of the character of the Marines in our Corps."

Desecrating the bodies of enemy fighters is a violation of the Uniform Code of Military Justice, and violators are subject to court-martial.

There is this strange combination of primal rituals and modern technology that keeps happening.

Dawn Perlmutter, director of the of the Institute for the Research of Organized and Ritual Violence

Bret A. Moore, a former Army psychologist who served two tours in Iraq, says the video is shocking, but the behavior is an extreme form of the disdain and contempt that soldiers are conditioned to feel for an enemy.

"It may seem odd to talk about 'healthy disdain' or 'healthy contempt,' " Moore says, "but you can't be best buddies with enemy combatants."

As to the act of urinating on the dead enemy, says Moore, "it's a macho gesture, sort of, 'Look what I've done!' It's somewhat animalistic, like marking territory."

Moore says the military tries to recruit people with high values and train them to behave properly, "but you're always going to have some rogue soldiers."

He says discipline may have fallen apart if the men were exhausted, or if they were far from their superiors in the command structure.

Regardless of whether the video is found to be authentic, the offense to Muslims is likely to be intense.

"This kind of thing is right up there with the Abu Ghraib scandal," says Dawn Perlmutter, who studies ritual violence. "I don't know how much [the service members] are aware of the shame-honor culture. In Islam, this would be viewed as so much more of an extreme insult than we would."

Perlmutter, the director of the Institute for the Research of Organized and Ritual Violence, says the incident would be considered an offense on at least two counts: mistreatment of the dead and a violation of purity.

"A dead body ... is left to other people to attend to and bury with all the honor and respect that's due to it," says Mohsin Naquvi, a director of the Islamic Information Center in Washington. "It's now the property of God, and the property of God is to be respected."

Naquvi says urinating on a dead body is "the utmost act of disrespect," because urine is one of nine substances that are viewed in Islam as inherently unclean. He says the offense is more intimately felt by Muslims, who are taught to regard every other Muslim as a brother.

Desecration of enemy corpses during war is something that goes back at least as far as The Iliad. But with modern social media, the crime can burst into the public consciousness, around the globe, within hours.

It's not yet clear who took the video, who uploaded it to the Internet, or what the person's motives were.

Moore, the former Army psychologist, says young soldiers are often isolated from the consequences of what they might post on the Web at the spur of the moment.

"If you don't see the public or see the faces of the people who will view this, it's easier to do than if you were telling the story face to face," Moore says. "It's not unique to service members. This is something that goes on from grade school up."

Perlmutter, meanwhile, says that "there is this strange combination of primal rituals and modern technology that keeps happening on both sides of this."

"Then the video becomes the trophy of war," she says.

Moore says he's not sure whether such incidents can ever be completely prevented.

"It has to be dealt with swiftly and decisively when it happens," he says, adding that prevention is a matter of training "in character, loyalty and values."