Accessibility links
When Did 'Kumbaya' Become Such A Bad Thing? The soulful folk song, born in the low country of South Carolina, has migrated from representing strength and power in togetherness to reflecting weakness and wimpiness. Somehow, it's morphed into a cynical code word.

When Did 'Kumbaya' Become Such A Bad Thing?

When Did 'Kumbaya' Become Such A Bad Thing? 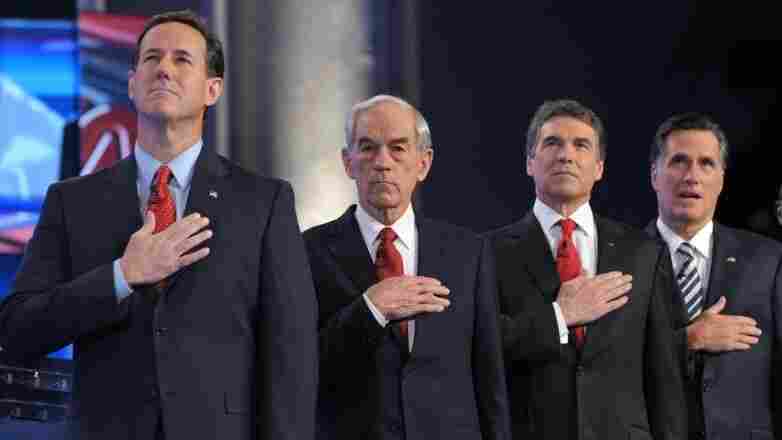 It wasn't kumbaya, but the GOP presidential hopefuls found harmony in the national anthem before a debate in November. Mandel Ngan/AP hide caption 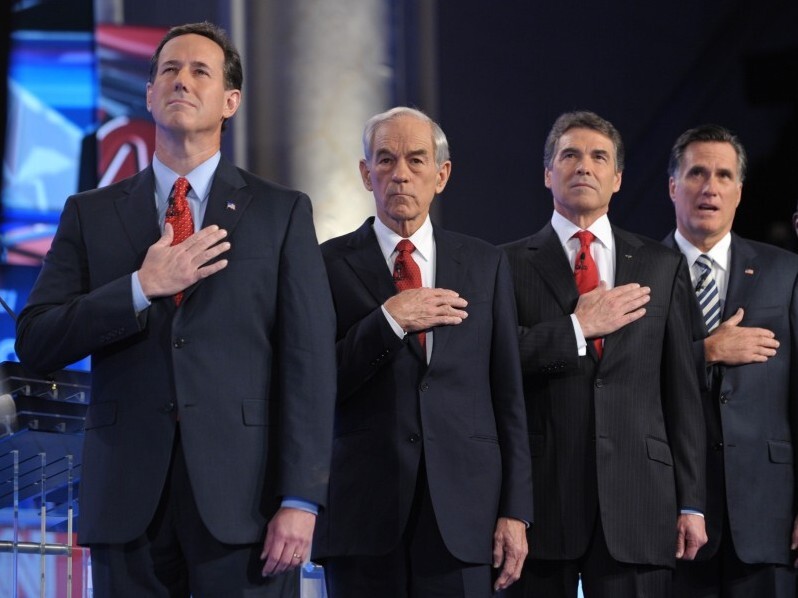 It wasn't kumbaya, but the GOP presidential hopefuls found harmony in the national anthem before a debate in November.

Regarding the rancor among the remaining Republican presidential hopefuls as they migrate from New Hampshire to South Carolina, Mike Huckabee, former Arkansas governor and erstwhile candidate himself, told ABC News this week that "There's not going to be some magic moment at which three or four of these people sit around a campfire toasting marshmallows, singing 'Kumbaya' and giving the nod to one of their competitors."

Candidate Rick Perry told The New York Times in October: "If you're looking for somebody that's going to say, 'Hey listen we're not going to make it hard on you, it's all going to work it out, and it's just, you know, "Kumbaya," ' I'm not your guy."

Singing "Kumbaya," former presidential candidate Herman Cain told a Chicago Tea Party rally in April of 2011, to much laughter, "is not a foreign policy strategy."

"Kumbaya"? Why are these politicos invoking a sincere, melodic popular American folk song in a disparaging manner? And it's not just the Republicans.

In a news briefing a few days ago, White House press secretary Jay Carney also alluded to the song. "I don't think that anybody expected or expects Washington to be a campfire where everybody holds hands together and sings 'Kumbaya,' " Carney said. "That's not what the nation's business is about."

Hmmm. If this nation is not about everyone getting along, what is it about? And when did "Kumbaya" become such a bad thing?

Like many political phrases these days, says Richard E. Vatz, a professor of political rhetoric at Towson State University, "Kumbaya" is used "irrespective of its derivation."

Pete Seeger sings "Kumbaya" and talks about the song's history in 1963.

In current political parlance, Vatz says, a reference to the song is used to sarcastically disparage consensus "that allegedly does not examine the issues or is revelatory of cockeyed optimism."

Michael E. Ross, writing in The Root in 2008, observes that "Derision of the song and its emotional foundation has become a required sign of toughness and pragmatism in American politics today, and this is especially true since the Sept. 11 attacks."

Through labor protests, folk masses, civil rights marches, student uprisings, postprandial programs at church spaghetti suppers, the song was treated in a straightforward manner, held up without irony as a ritual of reverence, a soft-voice anthem of togetherness, a choral group hug.

Then something changed in the American psyche, and "Kumbaya" — along with the unity it represents — began to be mocked, especially by political figures and the people who cover them. The song became sneering shorthand for blissful agreement.

The word "kumbaya" is believed by many music historians to be pidgin English — and a transliteration — for the prayerful plea to God: "Come By Here."

The song is an African-American spiritual "that was collected in the 1920s from the Gullah — or Geechee — people of the South Carolina and Georgia coast," says Jeff Place of the Smithsonian Institution's Center for Folklife and Cultural Heritage. "The Gullah have always fascinated folklorists because they have kept major parts of their African language and speak in a unique English dialect to this day."

The exact evolution of the song is somewhat mysterious, but Samuel G. Freedman of Columbia University traced what may be the earliest recording of the song back to 1926 when a folklorist — using a primitive wax-cylinder recording device — captured the voice of a Georgia man singing it.

Writing in The New York Times in 2010, Freedman noted that "Kumbaya" is actually a soulful cry for divine intervention on behalf of oppressed people. "The people who were 'crying, my Lord,' " Freedman wrote, "were blacks suffering under the Jim Crow regime of lynch mobs and sharecropping."

By the late 1930s, Freedman discovered, "folklorists had made recordings as far afield as Lubbock, Texas, and the Florida women's penitentiary." Folk singing legends Pete Seeger, Joan Baez, Peter, Paul and Mary and many others recorded versions of the song. They sang them at marches and at popular sing-along sessions known as hootenannies.

"Thanks to songbooks, records and the hootenanny boom," Freedman observed, "the black Christian petition for balm and righteousness became supplanted by a campfire paean to brotherhood."

Eventually, political activists latched on to the cohesive, easy–to-sing-while-swaying-and-locked-arm-in-arm charisma of "Kumbaya."

In 1963 about two dozen employees of the Young Men's and Young Women's Hebrew Associations in Manhattan held a sit-in — complete with choruses of "Kumbaya" — to protest the closing of 18 Jewish community centers.

In 1966, student protesters in Gary, Ind., reacting to the city's corruption and crime, altered the usual lyrics to fit their concerns: Gary's troubled, my Lord, Kumbaya. In 1977, Gov. Edmund Brown of California sang the song with California Conservation Corps trainees at a camp 75 miles north of Los Angeles. In 1980, protesters crooned it at a candelight vigil in Middletown, Pa., marking one year since the nuclear disaster at nearby Three Mile Island.

"Kumbaya" became a staple in the American songbook, a tune floating on the winds of change. And then, the winds changed for "Kumbaya."

Snarkiness swept across the land, and "Kumbaya" became its victim. In 1989 humorist Joe Queenan, in a mean-spirited essay titled "If I Had a Hammer...I'd Smash Their Guitars," said that hearing "Kumbaya" sent shivers down his spine.

In the mid-1990s, the Capitol Steps, a satirical singing group from Washington, mocked the song. Rick Santorum jumped on the anti-"Kumbaya" wagon in 1994. Speaking out against a program that would pay students for national service, Santorum said, "Someone's going to pick up trash in a park and sing 'Kumbaya' around a campfire, and you're going to give them 90 percent of the benefits of the GI Bill! That's a slap in the face to every person who put their butts on the line in a foreign country. ... That's not what America is all about."

"Kumbaya" hasn't changed, but America has.

The song has experienced a rebirth at Occupy spots here and there. And on YouTube today you will still find scores of sincere versions by children and choirs. But you are just as liable to stumble on a mashup featuring Ozzy Osbourne, a heavy metal "Kumbaya," and an extremely crude parody by a group called the Cheese Tapes.

And across the Internet, you will find countless references to it by politicians of all stripes.

But according to Smithsonian's Place, there is nothing inherently political about the song. "Politicians who want to be cynical," he says, "bring it up."

It works. Rather than kumbaya representing strength and power in togetherness and harmony as it once did, the word has come to reflect weakness and wimpiness.

And as the American political flock moves from the high peaks of New Hampshire to the South Carolina low country — the home of "Kumbaya" — this week, we are liable to hear it brought up time and again by people trying to disparage others.

The fuzzily translated word has become crystal clear code in the world of politics. As Vanderbilt University political scientist John G. Geer said to Freedman in The New York Times, invoking kumbaya "lets you ridicule the whole idea of compromise."

A previous version of this story stated that the first known recording of "Kumbaya" was made in South Carolina. According to Stephen D. Winick of the American Folklife Center at the Library of Congress, it was made in Georgia.