Accessibility links
Foreign Policy: The Struggle For Dignity From the Arab Spring to the struggle for same-sex marriage or equal pay for equal work, Francis Fukuyama of Foreign Policy argues that the desire for basic human dignity is at the core of these issues. 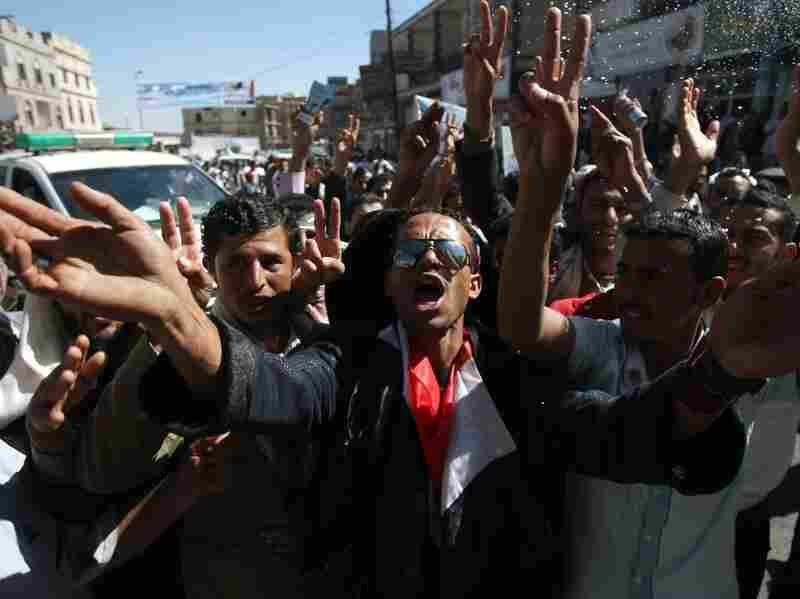 Yemeni anti-government protesters shout slogans during a rally. The self immolation of Mohammed Bouazizi, which sparked the Arab Spring, has caused many people to see the conflicts through a humanitarian lens. Mohammed Huwais/AFP/Getty Images hide caption 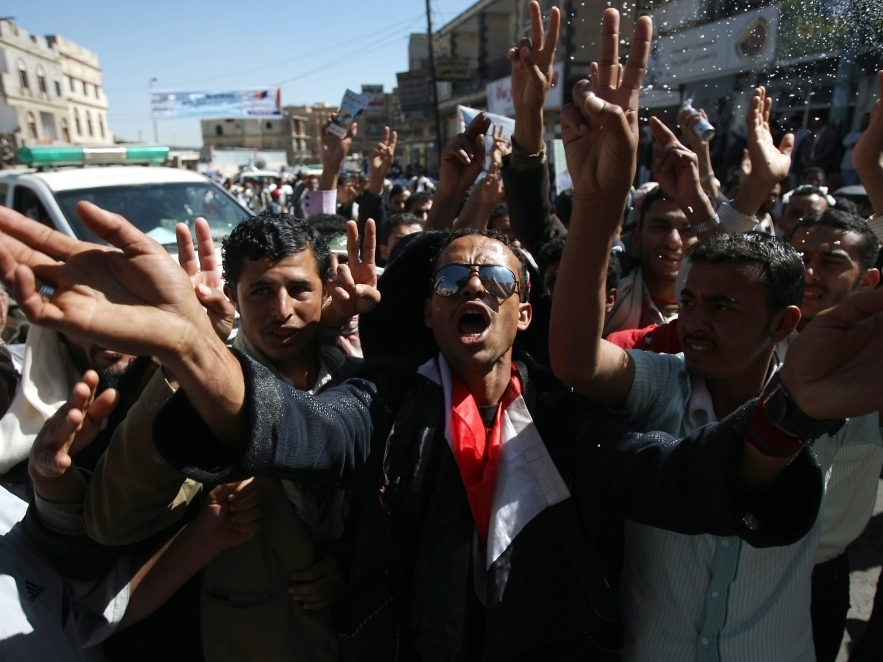 Yemeni anti-government protesters shout slogans during a rally. The self immolation of Mohammed Bouazizi, which sparked the Arab Spring, has caused many people to see the conflicts through a humanitarian lens.

Read An Opinion On Western Complicity In Foreign Corruption

The legend now has it that the Arab Spring was kicked off in early 2011 when a Tunisian vegetable seller, Mohamed Bouazizi, had his fruit cart confiscated by the police. Slapped and insulted by a policewoman, he went to complain but was repeatedly ignored. His despairing response — to set himself on fire — struck an enormous chord across the Arab world.

What was it about this act that provoked such a response? The basic issue was one of dignity, or the lack thereof, the feeling of worth or self-esteem that all of us seek. But dignity is not felt unless it is recognized by other people; it is an inherently social and, indeed, political phenomenon. The Tunisian police were treating Bouazizi as a nonperson, someone not worthy of the basic courtesy of a reply or explanation when the government took away his modest means of livelihood. It was what Ralph Ellison described as the situation of a black man in early 20th-century America, an Invisible Man not seen as a full human being by white people.

Authoritarian regimes have many failings. Like those in the Arab world now under siege, they can be corrupt, manipulative, and economically stagnant. All of these are causes for popular complaint. But their greatest weakness is moral: They do not recognize the basic dignity of their citizens and therefore can and do treat ordinary people with at best indifference and at worst with contempt. The Chinese government has been successful in giving its people jobs and security, but officials there no less than in the Arab world fail to respect people's basic dignity. Every passing week sees land confiscated from villages by a corrupt developer in cahoots with a local party official, and no one can do anything but lash out through violent protest.

In the Anglo-Saxon world, there is a tendency to see politics as a contest of economic interests and to define rights in utilitarian terms. But dignity is the basis for politics everywhere: Equal pay for equal work, one of the great banners of feminism, is less about incomes and more about income as a marker for the respect that society pays for one's labor. There are no interests that gays could not protect through civil unions, but same-sex marriage has become an issue in American politics because it signifies recognition of the equal dignity of gay and heterosexual unions.

One can understand the rights enumerated in the U.S. Constitution, as well as those in the basic laws of other liberal democracies, as mechanisms for formally recognizing the rights, and therefore the dignity, of the citizens to whom they are granted. Whatever one might ultimately think of the sexual-assault charges brought against Dominique Strauss-Kahn by Nafissatou Diallo, the New York City police were not free to ignore them just because he was a high-status IMF director and French presidential candidate, and she a humble hotel maid from Guinea. Many of the big political fights in American history have centered on dignity issues, i.e., who lives outside that charmed circle of human beings deserving to have their rights recognized, whether propertyless males, women, or racial minorities.

German philosopher Georg W.F. Hegel argued that the whole of human history can be seen as a prolonged "struggle for recognition" and that the modern liberal democratic order represents the triumph of the principle of equal recognition over the relationship of lordship and bondage. The problem of contemporary politics is that people often do not seek recognition simply for their dignity as abstract and equal human beings; they also seek recognition for the groups of which they are members, as Ukrainians or Kurds or gays or Native Americans. Identity politics is the politics of recognition, whether rooted in religion, gender, race, or ethnicity.

So too with the Arab Spring. It was not just abstract human dignity that authoritarian Arab regimes insulted; they also denigrated the rights of Muslims to have their religious identity recognized by the political system. Many Egyptian Islamists bear great resentments against liberal elites in their own societies who look down on them as uneducated and superstitious. The desire for recognition does not simply work to overthrow tyranny in the name of universal liberal rights; it can power assertions of a dominant identity, something I once labeled megalothymia.

The desire for recognition is thus a two-edged sword. It underlies the anger that powers social mobilization and revolt against abusive government, but it often becomes attached to ascriptive identities that undermine the universality of rights. Now that three dictatorships have fallen in the Arab world, with a fourth and fifth possibly on their way, this is the struggle that will play itself out.