Accessibility links
Russian Activists Turn To Social Media Young Russians are computer savvy, though until recently they had not turned to social media to challenge the government. Now, online activists are raising money and planning the next big protest against Russia's leaders. 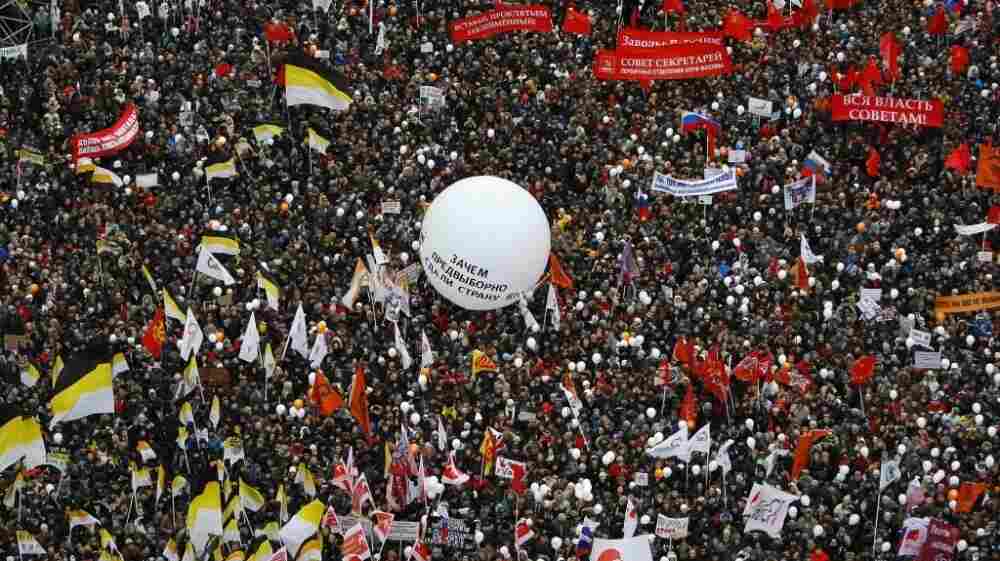 Russia's largest anti-government demonstrations since the Soviet breakup of 1991 are being organized and driven by a force that didn't exist two decades ago — social media.

In recent years, protests have been relatively rare, and Russians who got their news from state-run television essentially saw one narrative — one that relentlessly extolled the virtues of the country's leaders, particularly Vladimir Putin.

But demonstrators took to the streets last month after parliamentary elections that were widely seen as fraudulent. And activists are trying to maintain that momentum with slick Internet videos that satirize and disparage Russia's government.

One of those videos welcomes viewers to a mental asylum, where the inmates vote for Putin, the current prime minister. Putin has already served two terms as president, from 2000 to 2008. His decision to run for a third term in March served as a rallying point for his critics, along with irregularities in the parliamentary voting.

Some 50 million Russians are now on the Internet, absorbing these videos and using it as a forum to vent their frustration over government corruption, the top-down political system, and alleged election fraud.

Internet, Facebook, Twitter and other social media helped mobilize the protests last month. The demonstrations were enormous. Tens of thousands protested in Moscow on Dec. 24, with some estimates putting the figure at as many as 100,000.

Planning The Next Protest

The next demonstration is set for Feb. 4, and organizers are busy preparing for it on the Internet.

Alexey Kozlov, 38, peers at his laptop computer, opened to a page on Yandex, the Russian equivalent of Google. Kozlov, an executive at an investment firm in Moscow, is helping to organize online contributions for the protest rallies.

The money will pay for hot meals, a proper stage and sound equipment. Kozlov says contributions have been flooding in from all over Russia. The average contribution is 1,000 rubles, about $30. Donations shot up after Putin charged that the rallies were being backed by foreigners.

"When our authorities begin to say that this is money from the State Department, I think that the more than 5,000 people who really transferred the money, they became very angry about this," he said.

Kozlov says organizers are also using the Internet to get input from citizens on who should speak at the rallies.

Kozlov says he sees the use of social media in Russia growing and becoming bolder. Last month, video footage showing fraudulent practices at polling stations during parliamentary elections lit up the Internet.

Drandin says it's useless to complain to the Central Election Commission about the forgeries. The video is more powerful. Drandin is a member of an activist group called Democratic Choice, which will start training people to be observers during the March presidential election.

"We'll certainly recommend [they] get a video camera to record everything," he says. "Because this is the most efficient way to struggle against those cheaters. They are afraid of video."

All this has caught the government off guard, says Nikolay Petrov, an analyst at the Carnegie Moscow Center.

"Two months ago, Putin was saying that the Internet doesn't deserve any real attention, and it's the place where pornography dominates," Petrov says. "Now he's eager to order a bigger presence of the government and authorities in general on the Internet."

But it's been a rocky start — Putin's own website was unveiled Thursday. The comments section quickly filled with calls for him to resign. Those comments later disappeared from the site.