Accessibility links
In Haiti, Hope Is Still Hard To Find You can see some progress in Haiti two years since the 7.0-magnitude quake hit. But Port-au-Prince is a tour of unrelenting misery and often disturbing images. NPR's Carrie Kahn and Marisa Penaloza report that you can tell the pace of progress by looking into people's eyes — emptiness looks back at you. 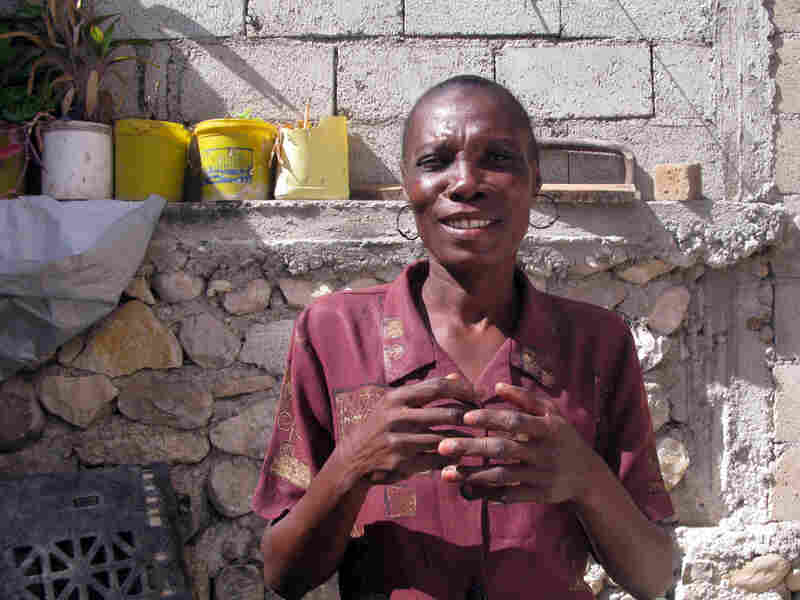 Elicia Andre, who says she used to be much larger — a sign of affluence in Haiti — is now skin and bones. Marisa Penaloza/NPR hide caption 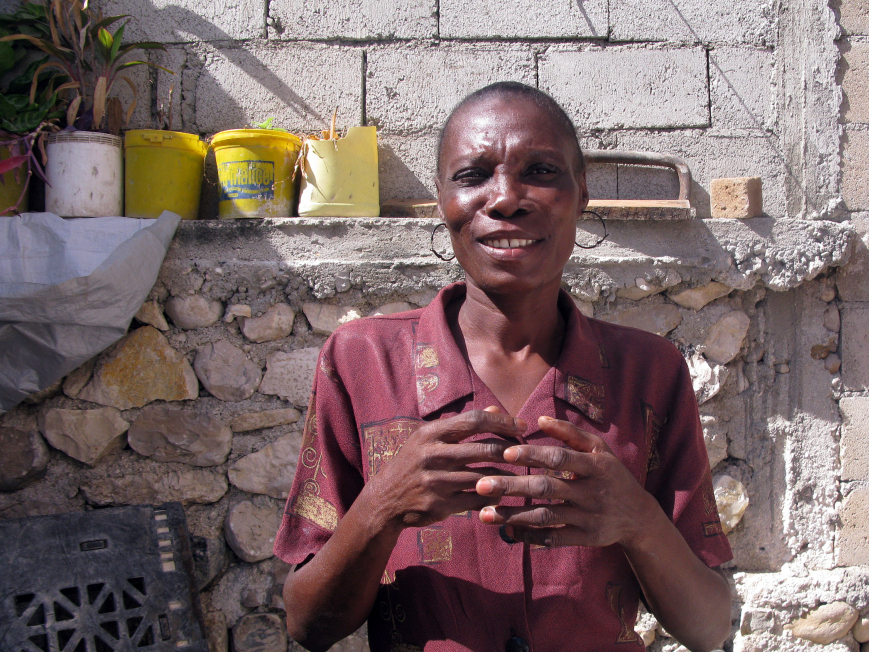 Elicia Andre, who says she used to be much larger — a sign of affluence in Haiti — is now skin and bones.

You can see some progress in Haiti two years since the 7.0-magnitude quake hit. But Port-au-Prince is a tour of unrelenting misery and often disturbing images. Things are happening — slowly. You can tell the pace of progress by looking into people's eyes — emptiness looks back at you. Pain is etched on their faces.

You see it in Elicia Andre. We met her back in December at the homeless encampment run by Catholic Relief Services in Port-au-Prince, where she sought refuge after the quake. The charity had just given her $500 to rent an apartment for a year.

There were hardly any tents left at the camp when we talked to her. It was pretty much a huge empty lot with a lot of garbage. We walked around for a bit. Andre had trouble finding the spot where her tent was. Finally, she stopped. "It's here," she whispered.

Tears filled Andre's eyes as she told us about how her husband had been crushed to death in the earthquake, how she was in a state of shock for so long after, how she still doesn't know what to do without him. She also kept telling us how much larger of a person she used to be — a sign of affluence in Haiti; now she is skin and bones. Andre is 45 years old, but she looks more like 60.

Since the quake, lots of help has come to Haiti — but it just never seems to be enough. It took Andre almost two years to get out of a camp, but so many aren't as lucky in Haiti. Plenty are stuck.

Like those still living at Champs de Mars, the sprawling camp right across the street from the National Palace.

We have been here many times, but this time it felt much different walking around. People weren't as willing to talk to us. They told us to get out or demanded money for interviews. They seemed much angrier and out of patience.

Even when you find someone with a more open spirit, hope quickly fades. Like the boys playing a board game they had made — they call it nido — but they complain about how the police always come by and kick it out from under them. Or the woman eking out a living giving pedicures, yet lost her foot in the earthquake. Or the two men who tried to make some music with a rusted bongo drum and a guitar with very few strings. Running right under their feet is open sewage — the smell, nauseating.

Some relieve themselves on the ground; gone are their walls, their privacy, their dignity.

Champs de Mars is still huge, filled with once crisp tarps now discolored and torn. It has no running water. But Michelin Tibeaoux, who lives here with her son and grandson, had some water in buckets to wash her dishes. She's 69 years old. She said she just wants out of there. She wants what Elicia Andre got — money to rent an apartment.

Andre took us to see her new place. She proudly unlocked the door and showed us in. The walls were painted white. She had a lace curtain up across the room to separate the bedroom.

For the first time, we saw a brief smile as she showed off her new home. She even said, "I'm happy." But then her eyes seemed to go blank again. Her children aren't staying with her. She can't sleep. She's still sleeping on the floor. She used the $500 she got from Catholic Relief Services to pay for a year's rent, and she doesn't have a job — and a bed is a luxury she can't afford.

Andre and others told us Haitians were emotionally taxed before the quake, but now their souls seem as damaged and fragile as their country's infrastructure.

We went to Elicia Andre's house really hoping for some sort of happy ending — anything. That's what it's like in Haiti. There just isn't enough help to go around.