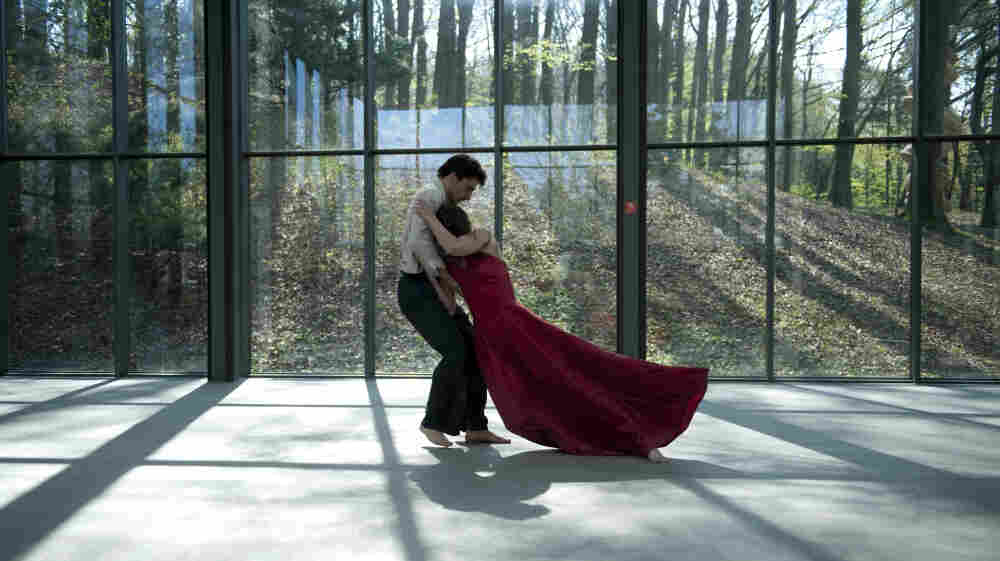 The film Pina is Germany's official entry at the 84th Academy Awards — and a collaboration between two famous Germans of the postwar generation. The filmmaker Wim Wenders captures the groundbreaking modern-dance choreography of the late Pina Bausch, in what many critics are calling a groundbreaking use of 3-D film.

Wenders is best known in the U.S. for such 1980s dramas as Paris, Texas and Wings of Desire. He's also published several books of his art photographs, and Wenders' interest in music led him to make the much-loved 1999 documentary Buena Vista Social Club. But modern dance was never one of his particular interests.

"Dance — include me out. It was not for me," Wenders says. "And the first time I ever saw the Pina Bausch company perform, my girlfriend really, literally dragged me."

It was a 1985 performance by Bausch's company, the Tanztheater Wuppertal, or Dance Theater of Wuppertal, Germany. Bausch was already world-famous and controversial in 1985 for intensely dramatic choreography that was wildly unconventional — even by modern-dance standards. Wenders came prepared for tedium. 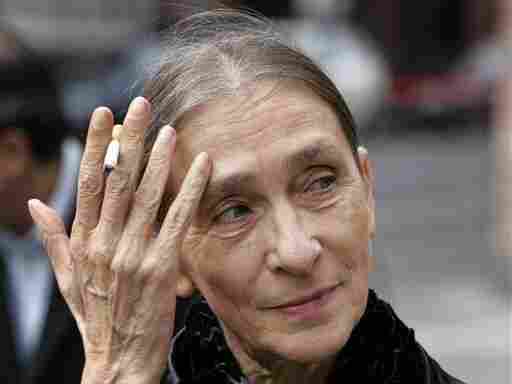 Pina Bausch, choreographer and director of the Wuppertal Dance Theater, is seen in Frankfurt, Germany, in 2008. Bausch died in 2009. Michael Probst/AP hide caption

"And then I found myself on the edge of my seat, crying like a baby after five minutes, and crying through the entire thing," he recalls, amazement still in his voice after 27 years. "I was hopelessly, helplessly crying, and didn't know what was happening. It was like lightning struck me."

He says it changed his life.

"Pina Bausch showed me in 40 minutes more about men and women than the entire history of cinema."

Wenders says he sought out Bausch the next day, and immediately they began to plan a film together. She set two ground rules for the film: no biography of her, no interview with her.

The film they planned would consist of just the dances — the choreography that won her nearly every major global prize in a career that began in the 1970s and continued through four decades.

The performance that Wenders had seen was one of Bausch's signature pieces, Cafe Muller. Wenders ultimately filmed it for his documentary. The stage is set with tables and chairs. To the plaintive Baroque music of Henry Purcell, a woman blindly plods across the cafe. An anxious-looking man pushes chairs out of her way to clear a path across a space usually thought of as a gathering spot. People do not connect easily at the Cafe Muller, however, and their jerky, hesitant attempts become a social metaphor.

Bausch and her company first performed Cafe Muller in 1978. Some critics and audiences claimed that it (like Bausch's work in general) was too ugly to be called dance. But in 1988, Bausch defended Cafe Muller to NPR with a bit more heat than usual for the notoriously shy and soft-spoken choreographer. She addressed specifically the movement in which a woman throws herself against a wall and sticks to it in awkward poses.

"What kind of feeling must this woman have, to do something like this?" Bausch demanded. "It's not so difficult to think this, no? If people are very sad or something, it does not look so pretty. In ballet, usually you speak about certain kind of people. You have a different story [in ballet] — it's almost like a fairy tale, it's a fable, it's like princes. In this, we speak about us; we are the heroes on the street." 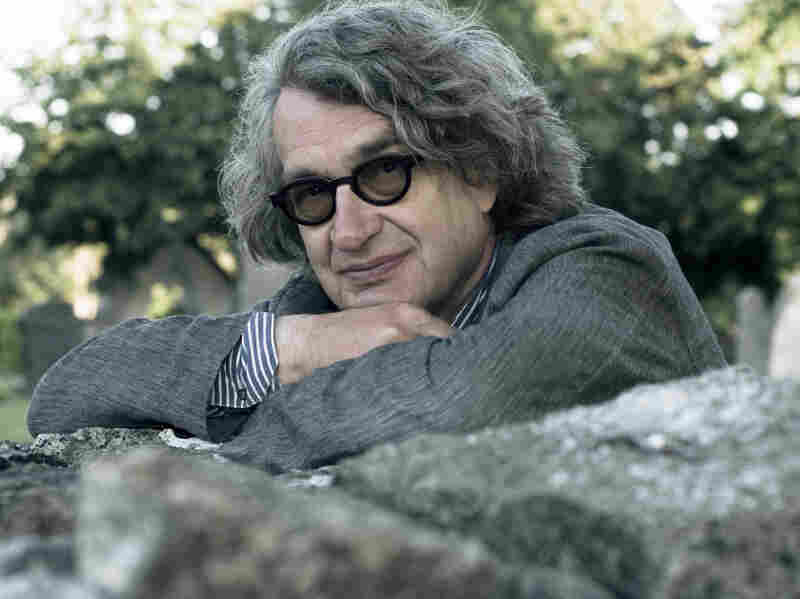 Director Wim Wenders says he was thoroughly uninterested in dance — until seeing Bausch's work in 1985. The evening inspired a decades-long collaboration with her. IFC Films hide caption 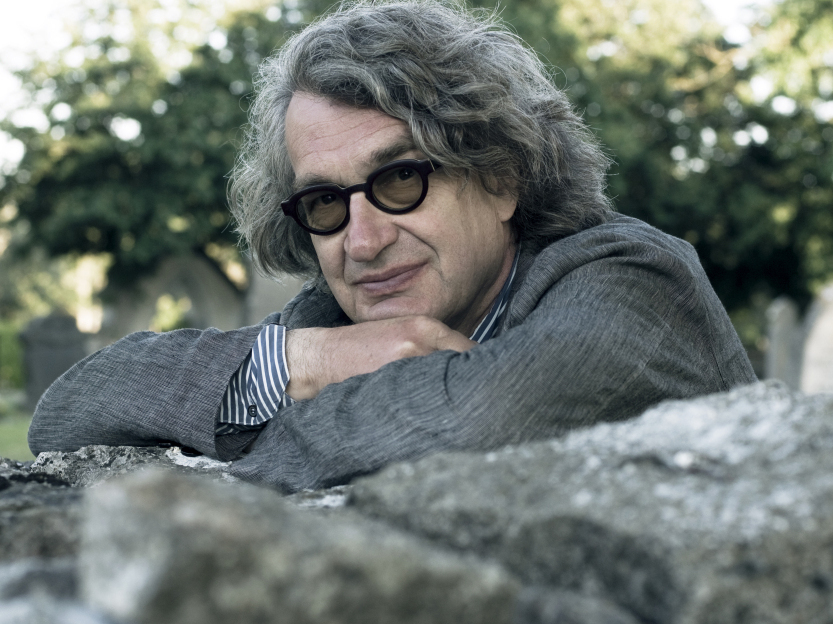 Director Wim Wenders says he was thoroughly uninterested in dance — until seeing Bausch's work in 1985. The evening inspired a decades-long collaboration with her.

"She had changed the whole notion of what dance was," says Mark Swed, classical music critic for The Los Angeles Times. He says Bausch opened the door for modern choreographers in terms of subject matter and staging, with her use of nudity and her feminist portrayal of sexual aggression.

"She dealt with themes of destruction, and it could feel very nihilistic, except that she always put the pieces back together," Swed says. "You didn't come out depressed — ever — from the work. You could come out a little confused, a little bewildered, but also inspired."

Bewildered, perhaps, because you never knew what Bausch might do to a stage. As Swed points out, dancers could be pounding through several tons of peat covering the floor, as in Bausch's harrowing staging of Stravinsky's Rite of Spring, which is also seen in part in Pina. Or they might be dancing in sand. Or among 4,000 pink carnations.

They might swim on a river created on an opera-house stage, or in rain — real water and lots of it. Wenders wanted to capture it all in his documentary. The only obstacle, he says, was finding the right way to film dance.

"Between dance and film, there was a difficulty. And there was always like an invisible wall. And I couldn't break that wall," he admits. It took him nearly 20 years to find the answer, at a U2 concert film. He would shoot dance, he decided, in 3-D.

"For the first time, we had a tool as flmmakers that allowed us to actually be in space, to be in the same element as the dancers," he says exultantly.

Wenders: 'My Cameramen Could Dance Along'

Bausch On Using Water Onstage: 'In The Opera House, It's Better'

But the bulky camera and heavy rigs required lots of planning. Wenders says he needed "a dinosaur" of a crane to film stage performances. He worked with 3-D experts for more than a year, and by June 2009 he was ready to shoot rehearsals and show Bausch the results.

And then, just a few days before the cameras were to roll, the choreographer died. It was a horrible surprise to nearly everyone; she had been diagnosed with lung cancer less than a week earlier and had, with her usual reticence, kept it to herself.

"I immediately canceled the film, because we had wanted to make this together for 20 years," says Wenders. "And the fact there is a film after all, I strictly owe to the dancers."

The troupe decided to continue performing for three years to fulfill their contracts. (They will appear at the London Olympics this summer.) They wanted Wenders to go ahead with the film, not only because it was something Bausch wanted, but also because they felt "her eyes," as Wenders puts it, were still fresh on their dancing. It would preserve Bausch's choreography in a form that reflected her direction of the pieces.

"We could no longer make a film with Pina," Wenders says, "but we realized there was a film to be made for Pina."

Wenders followed her wishes and concentrated on the dances, but he did weave among them some of the dancer's thoughts about Bausch. We see what he calls "silent portraits" of the troupe, as each sits quietly before the 3-D camera. We hear the performers' interior monologues. 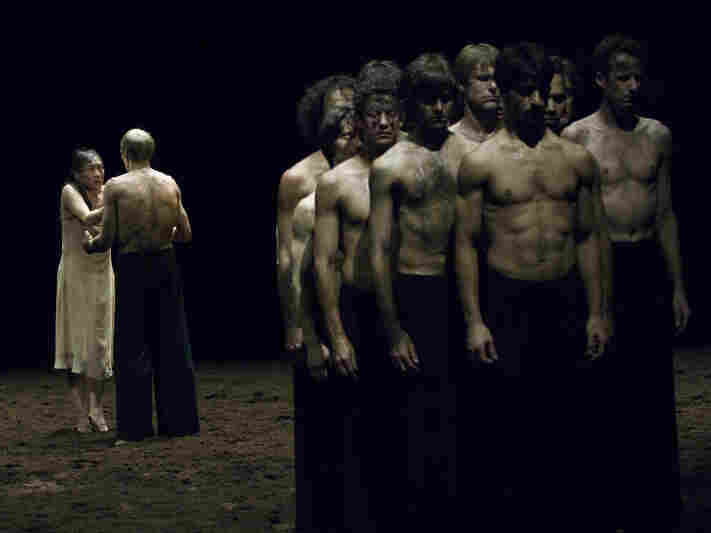 One of the dancers says of the choreographer: "Pina was like finding a language, finally. Before, I didn't know how to talk. And then she suddenly gave me a way to express myself. A vocabulary. When I began, I was pretty shy; I still am. And after many months of rehearsing, she called me and said, you just have to get crazier. And that was the only comment in almost 20 years."

Following most of these monologues in the film are short solo or duet performances, set all around Wuppertal: at its famous monorail, in traffic, on slag heaps in the industrial wasteland that rings the city. These sequences were filmed with the lightweight 3-D camera rigs that became available after 2009. It made shooting easier — but for Wenders the biggest challenge of 3-D was always how to make it support the story he wanted to tell. This was no sci-fi epic.

"I figured from the beginning we had to invent a different kind of 3-D," the director says." The film could not be effect-driven, because the attraction of our film was the dance itself and Pina's work, and not the technology with which we shot it. I wanted to invent a 3-D that was all natural and was gentle to the eyes, and that you would almost forget after a few minutes. And you'd really forget that you ever saw dance differently."

That may be true for the people lucky enough to see Pina in 3-D in a theater. But though the distributor of Pina required reviewers to see it in a 3-D screening, the Academy of Motion Picture Arts and Sciences required regular DVD screeners for the members who nominate Best Foreign Language Film and Best Documentary Feature. And, of course, millions will see the film at home on their flat screen — which is overwhelmingly likely to be really flat when it comes to 3-D. So Wenders says his crew and he gave special attention to preparing the 2-D version.

Despite the public's limited ability to see 3-D now, Wenders has no plans to shoot in 2-D ever again. "That would be like returning to something ancient," he says.

In fact, he's already at work casting a family drama — to be filmed in 3-D.