Accessibility links
Speedy Toy Cars Blur The Boundaries Of Sculpture Metropolis II is a giant model of a city with 1,200 colorful little cars zooming at lightning speed around it. The 10-foot-tall piece basically fills up a room, and accidents can happen at any time. Artist Chris Burden decided early in his career that "movement, performance in a certain sense, was the core of sculpture." 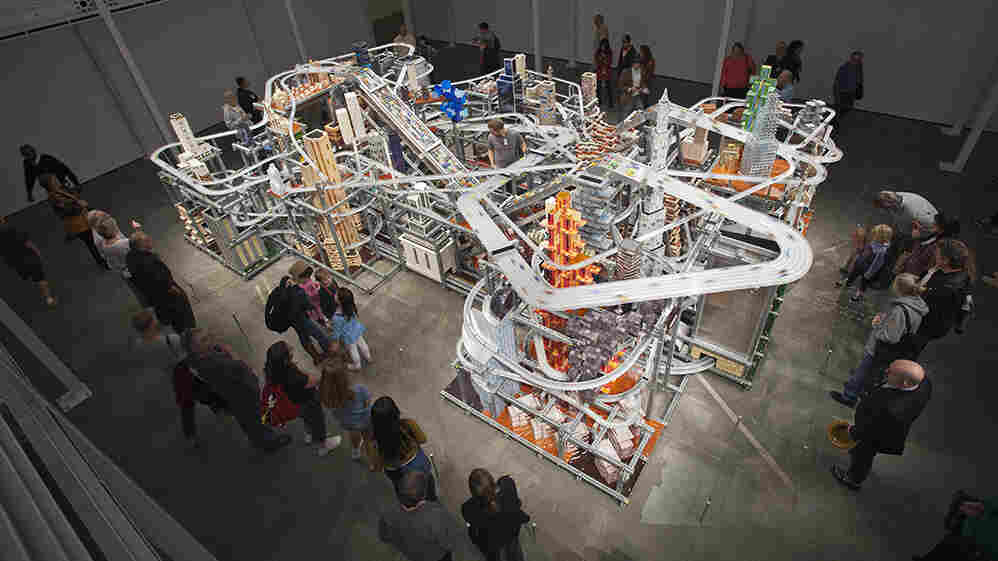 Chris Burden's early career was all about the intersection of art and danger. The 1970s saw him lying crucified with nails on the roof of a Volkswagen Bug. In another piece, he was shot through the arm by an assistant — literally.

"It was a way to make art without making an object," he says.

For the past four years, Burden has been working with a team of eight on a piece called Metropolis II. It's a giant model of a city with 1,200 colorful little cars zooming at lightning speed around it. On Saturday, the loud new installation will open at the Los Angeles County Museum of Art. 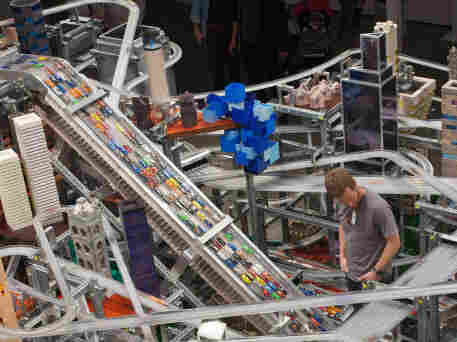 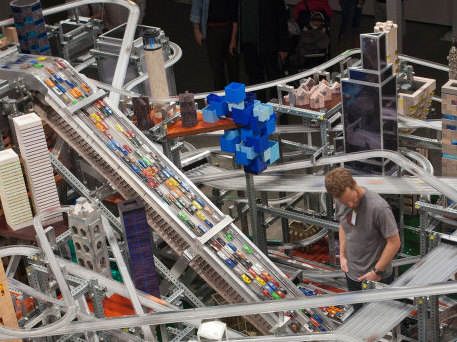 Chris Burden's sculpture Metropolis II requires a traffic controller, who watches for pileups on the highways.

"As a young artist, I tried to figure out what sculpture really was," Burden says, "and my conclusion was that human action, movement, performance in a certain sense, was the core of sculpture."

Burden has moved on from conceptual work and made lots of different stuff since then. He says this new sculpture of a city "kind of goes back to making an object, but an object that is performative."

The piece is a 10-foot-tall model of a city. Basically, it fills up a room. There are colored buildings here and there, and dozens of aluminum tracks sloping over, under and around them at different levels. An operator steps under some tracks, into the middle of the sculpture, and flips a few switches.

Then, the action: 1,200 toy cars slowly speed up and then start zooming around on the tracks.

There's a balcony, so viewers can look down on it from above. The colorful cars whoosh past so fast that they make a kind of repetitive pattern. Burden describes the hum of the movement as "white noise ... like a river or a brook or a stream."

The cars aren't tethered to anything. They move by a central engine and magnetic pulls, so there's a possibility of real accidents. The operator in the middle of the piece has to keep a close eye out for problems and can press emergency stops if she has to.

"It's like the real world. One accident causes more and more, and then, you know, it's a pileup," Burden says.

This is the artist's second major installation for the Los Angeles County Museum of Art. The first was the now-iconic sculpture Urban Lights, which features rows of antique street lamps looking out on Wilshire Boulevard in front of the museum. Burden feels his more recent works give the museum a little more mass appeal.

"I think all these things help bring maybe a lay public that would not ... be interested in art necessarily," he says. "I don't think you need to have an art history background to understand this sculpture."

There is something just neat about hundreds of little cars zooming around superfast on metal tracks. No art history classes necessary.

A Short Documentary On 'Metropolis II'

Chris Burden's sculpture took four years to build. Film directors Henry Joost and Ariel Schulman of Supermarche spent a few days with the artist and the tiny city he created.