Accessibility links
In S.C. GOP Forum, Romney Gets Implicit Jabs Candidates were explicitly prohibited from even mentioning each other during the presidential forum Saturday. Still, going into the last week of campaigning in South Carolina, most found ways to get in a hit without naming their rivals. Front-runner Mitt Romney was the biggest target. 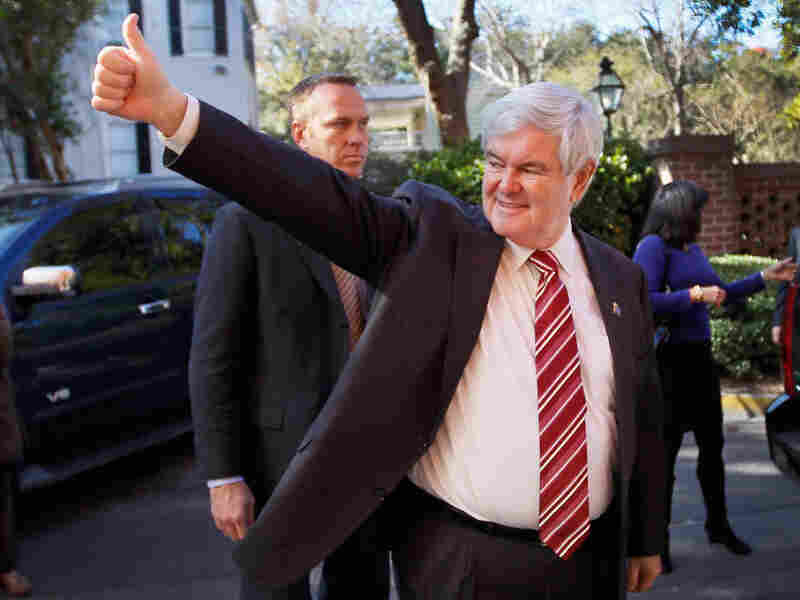 Newt Gingrich arrives for a GOP presidential candidate forum Saturday in South Carolina. Gingrich had to be reminded of the rules not to mention rivals by name, but was still able to continue criticism of Mitt Romney. Joe Raedle/Getty Images hide caption 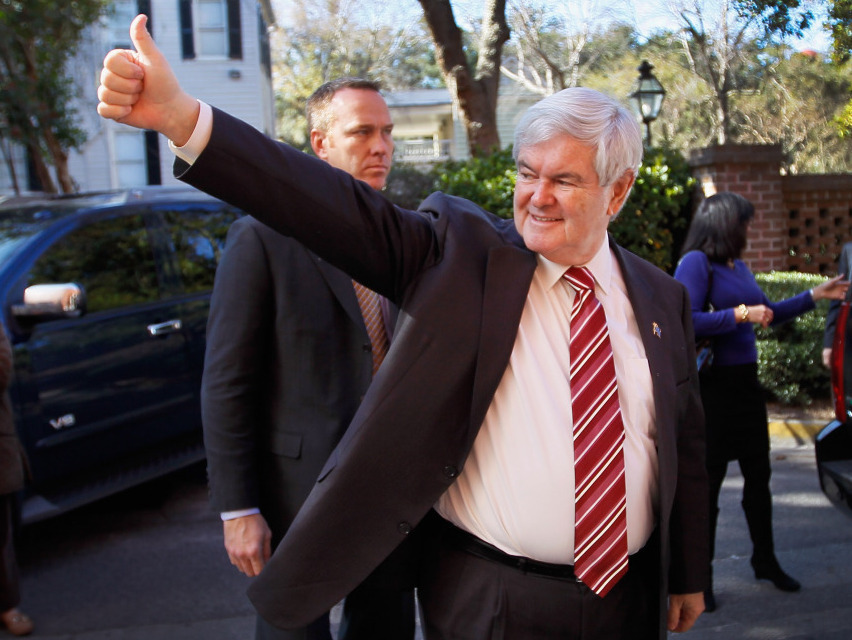 Newt Gingrich arrives for a GOP presidential candidate forum Saturday in South Carolina. Gingrich had to be reminded of the rules not to mention rivals by name, but was still able to continue criticism of Mitt Romney.

The GOP presidential candidate forum held Saturday in Charleston, S.C., was not exactly a debate. In fact, it was sort of the opposite of a debate.

The event was moderated by Fox News host and former presidential candidate Mike Huckabee. All the candidates except for Ron Paul attended, but they never actually shared the stage. They were explicitly prohibited from attacking — or even mentioning — each other.

Aiming To Show Strength, Evangelicals May Achieve Opposite

Still, going into the last week of campaigning in South Carolina, most found ways to get in a jab without naming their rivals. The vast majority of the jabs were aimed at front-runner Mitt Romney.

One member of the audience asked Jon Huntsman about his position on abortion.

"I am very clear on my pro-life philosophy," he said. "I have always been pro-life, and I always will be."

Romney supported abortion rights before he changed his position.

Rick Santorum also tried to contrast himself with the stereotype of Romney as a political opportunist who blows in the wind.

"Not everybody agrees with everything that you believe in, but what they want to know is that you believe what you believe," Santorum said, "and folks trusted me that I would stand up and in fact do what I said, and I was doing it for the right reason."

Newt Gingrich did not even bother with the oblique attacks. He went after the former Massachusetts governor by name. He continued the argument he has pursued for the past week — that Romney made a fortune at the investment company Bain Capital by closing companies and laying people off.

"To ask questions about a particular company is not the same as attacking capitalism, and I don't see how you can expect us to have a presidential campaign in which an entire sector is avoided," he said. "And I guarantee you if we Republicans avoid it, our nominee in the fall is not going to find that Obama avoids it at all."

All week long, Rick Perry joined in the Romney attacks on the campaign trail. Saturday night, however, he was the only one who did not go down that path, talking instead about his record as Texas governor.

Romney is the target because he is the man to beat in this race. He won Iowa and New Hampshire. Now South Carolina could be his rivals' last best chance to unseat him.

Polls show Romney ahead of the pack one week before the primary, but South Carolina voters still have concerns about his conservative authenticity.

One man asked Romney, "How will you convince us that you and Obama aren't just two sides of the same coin?"

Another woman said, "Can you convince me, as a true conservative, why we should vote for you, a moderate Republican, against any of the other candidates? Will you flip flop if you are elected?"

Romney tried once more to prove his conservative mettle. He said he governed Massachusetts as a conservative. In answer to another question, he said he'll fight for religious expression.

"I will not proceed down the path that I think you're seeing across this country, which is to try to secularize America," he said. "I think you ought to be able to have mangers at Christmastime and menorahs representing other faiths. Look, we are a believing people."

So far, Romney has benefited from the failure of his opponents to coalesce behind any one alternative.

As the forum was taping Saturday, conservative Christian leaders decided to throw their weight behind Santorum. Now it remains to be seen whether the anti-Romney voters will fall in line behind those leaders.