Accessibility links
Ski Resorts Blow Fake Snow For A 'Brown' Winter Normally at this time of year, about 50 percent of the U.S. is snow-covered.These days, the figure is now more like 20 percent. It's hurting ski resorts and the local economies that thrive on seasonal winter tourism. 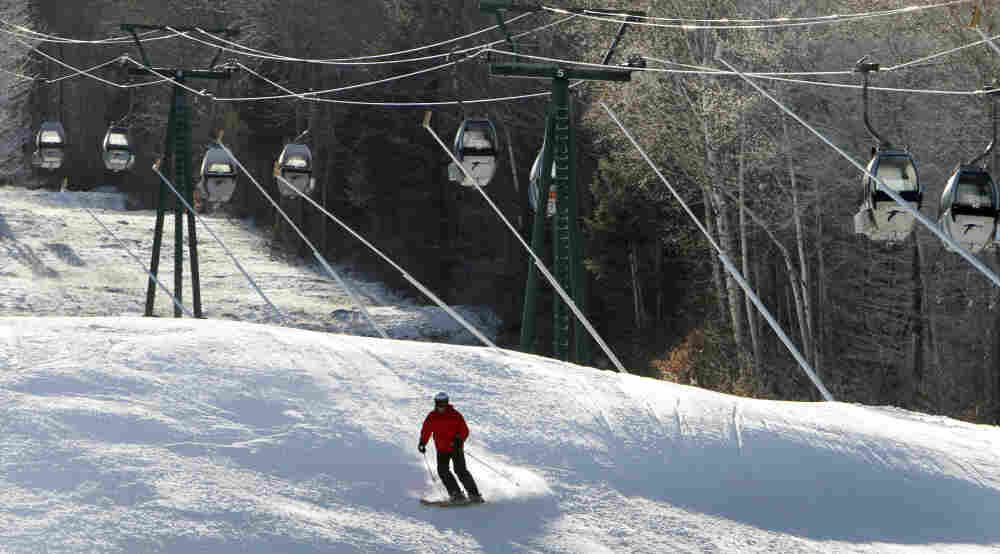 Empty gondolas sit parked above a lone skier in mid-December on an open trail at Loon Mountain ski area in Lincoln, N.H. Warm temperatures have continued to hover above optimal snowmaking levels, making for a late start to the ski season in the Northeast. Jim Cole/AP hide caption 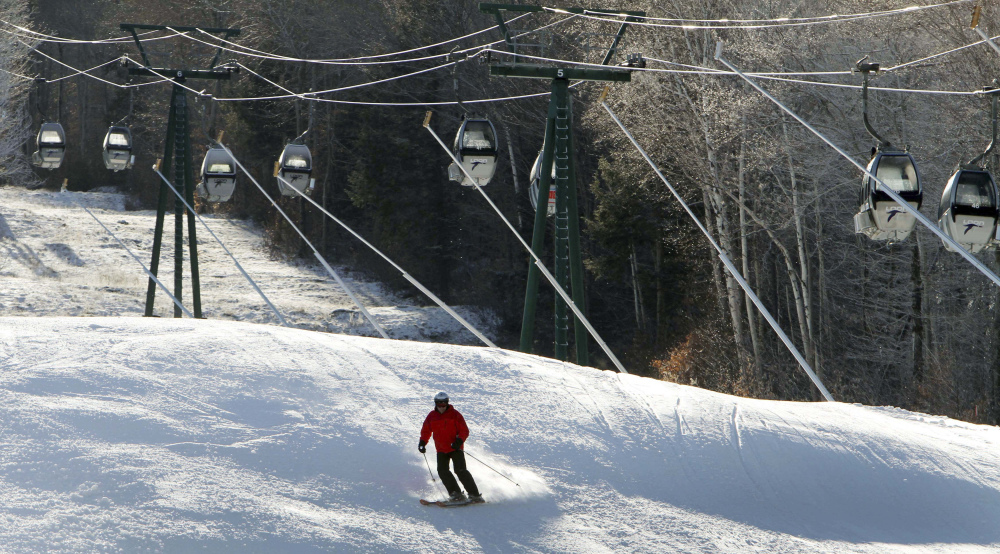 Empty gondolas sit parked above a lone skier in mid-December on an open trail at Loon Mountain ski area in Lincoln, N.H. Warm temperatures have continued to hover above optimal snowmaking levels, making for a late start to the ski season in the Northeast.

Across the Midwest and northeast this weekend, ski resort towns are celebrating the arrival of winter for the first time this season.

Terry Hill has been renting out cabins near Baxter State Park in Maine in 30 years, where she says they only received about four to five inches of snow on Saturday.

She usually rents her cabins to those who like to snowmobile, but those cabins are empty right now. She says Maine needs a couple more big storms to make up lost ground for what's been a brown winter.

"It doesn't feel right at all," Hill says. "We normally would have good snow in December."

In Homewood, Calif., 3,200 miles away, Rachel Woods, spokesperson at Homewood Mountain says a lack of snow means only beginner runs are open — and even then, only on the weekends.

There was some snowfall early on in the season, but since then it's been dry. Fortunately for the snow-making team at Homewood it has been cold.

But making your own snow can be expensive, especially for smaller resorts, says Rob Katz, CEO of Vail Resorts, the largest winter resort company in the U.S.

Meterologist Paul Douglas, founder of the Minneapolis-based weather company Broadcast Weather, tells weekends on All Things Considered host Guy Raz that Katz is getting his money's worth this year.

Douglas says Minneapolis is finally getting "typical January weather," at 11 degrees and wind-chill dipping below zero, but earlier this week, it was 52 degrees.

"What's weird is that 15 to 20 cities set all-time rainfall records last year, seven states had the wettest year on record," Douglas says. "We've had crazy extremes, Texas in the midst of a historic drought while it's incredibly wet east of the Mississippi."

Last year's La Nina followed on the heels of a moderate El Nino and because we are now going from La Nina to La Nina, Douglas says, we should expect a shorter, tamer winter.