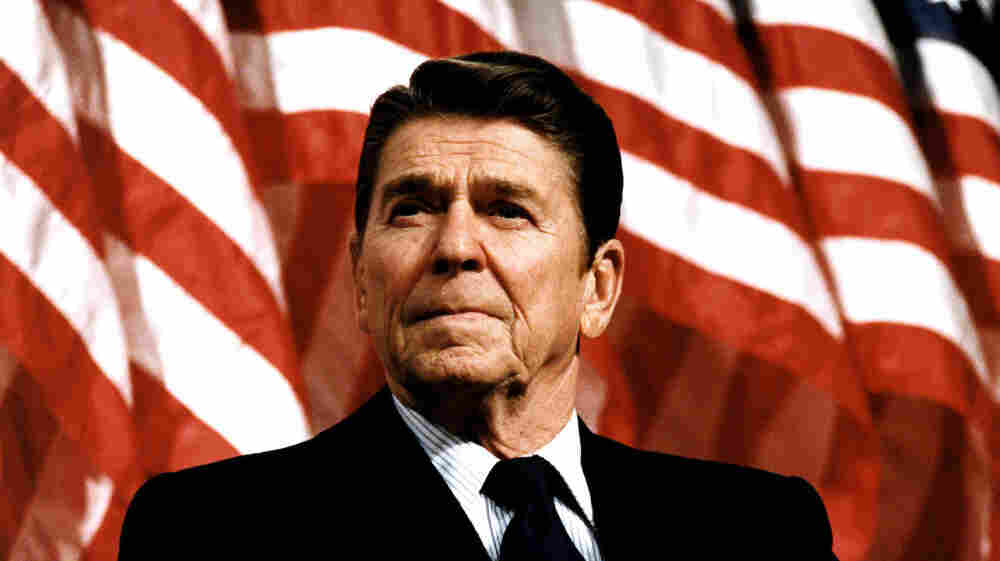 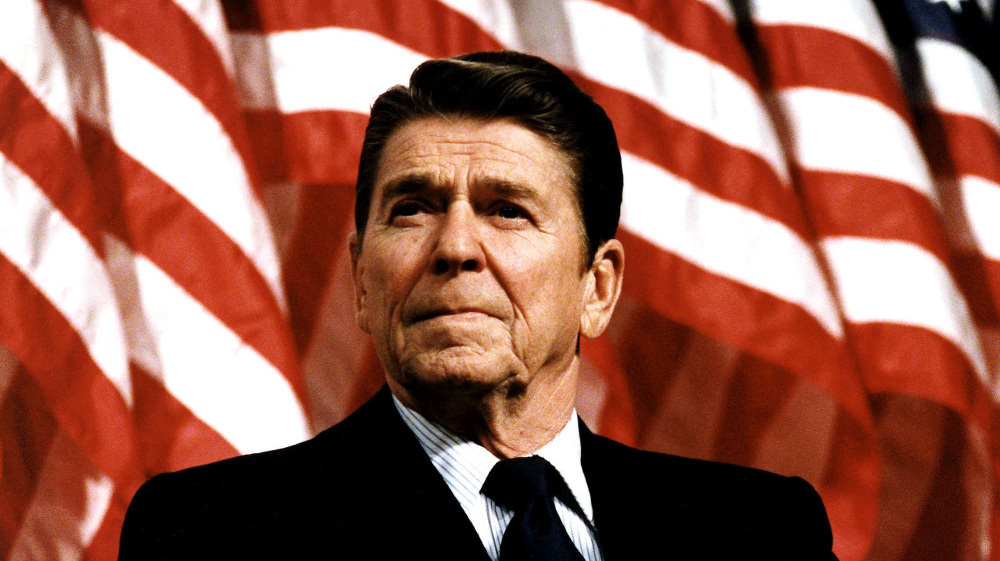 As president, Ronald Reagan raised taxes and granted amnesty to illegal immigrants. Would today's Reagan conservatives vote for him — or run attack ads?

It's no secret who the most popular Republican is in this year's GOP presidential race. In just one single debate last year, GOP candidates mentioned the former President Ronald Reagan 24 times.

Right now, each candidate is vying for the mantle of Reagan conservatism. Yet some historians, and even some of the folks who worked for Ronald Reagan, are now wondering whether Reagan himself was enough of a Reagan conservative — at least the way it is defined today.

So what exactly is a Reagan conservative anyway? If he were alive, could Reagan get the GOP nod?

Reagan biographer Craig Shirley tells weekends on All Things Considered host Guy Raz that it was against backdrop of the 1970s that Reagan first ran for president.

"You had rampant inflation [and] high interest rates; we were losing [the] Cold War," Shirley says. "Americans had become rampant cheap consumers of the '70s – disco music or pet rocks or leisure suits – all of those things that really summed up what was really a very bad time for the American people."

A young former Nixon aide named John Sears convinced Reagan he should run for president against the incumbent Gerald Ford in 1976. Against huge odds, Reagan actually came close to winning that year and would eventually go on to win in 1980.

Reagan had a cultural appeal with the New-Deal, blue-collar, urban-ethnic, lunch-bucket voters that other Republicans didn't, Shirley says.

"Nixon had a little bit, but not the way Reagan did. So this was the beginning of his reorganization of the two parties," he says.

The man who became the most important American conservative icon in the 20th century was, in many ways, a moderate, says Shirley.

In 1978, Reagan campaigned against a referendum in California called Proposition 6 that would have banned gays and lesbians, and possibly anyone who supported gay rights, from working in the state's public schools.

The bill was supported by the Christian right and sponsored by state legislator John Briggs. The measure failed, and Briggs later said it was solely because of Reagan. 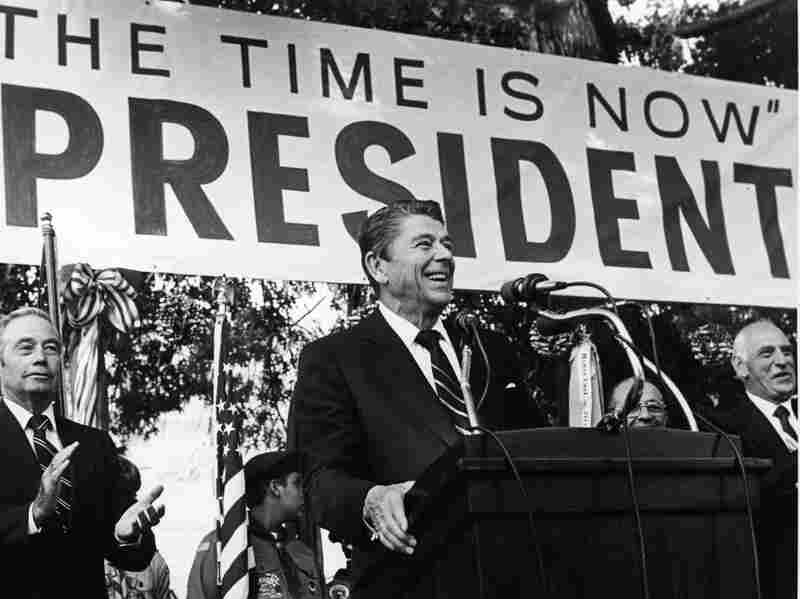 Ronald Reagan rose to the presidency at the end of the 70s, an era when inflation and the Cold War threatened America. Hulton Archive/Getty Images hide caption 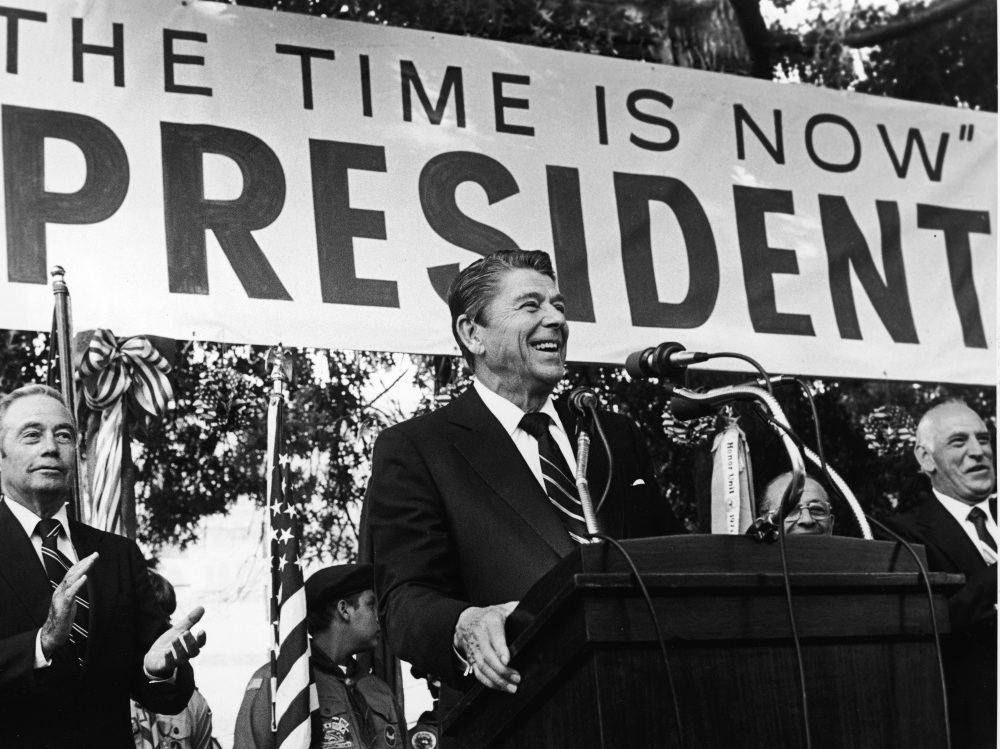 Ronald Reagan rose to the presidency at the end of the 70s, an era when inflation and the Cold War threatened America.

Reporter Walter Shapiro is covering his ninth presidential campaign, now for Yahoo! News and The New Republic. He tells NPR's Raz that there were plenty of Reagan-era policies that wouldn't sit well with the GOP today — like raising taxes.

In the early '80s there was a deficit problem, and after massively lowering taxes there was an adjustment upward. Reagan's tax reform of 1986, which basically eliminated a number of deductions in order to lower rates, would be attacked today, Shapiro says.

Also in 1986, Reagan's Immigration Reform and Control Act granted amnesty to millions of illegal immigrants who entered the U.S. prior to Jan. 1, 1982.

"This is the immigration bill that the Republicans are railing against when they say, 'No more amnesties' — and this was Ronald Reagan," he says.

Many of the GOP candidates running for president have repeatedly pointed out that many — mostly poor — Americans don't pay federal income taxes. But in his 1985 State of the Union address, Reagan said he'd propose the exemption of federal income taxes to those living at or below the poverty line.

"This is, again, the problem with this plaster-saint iconography," Shapiro says.

There are many ways in which Reagan was a genuine conservative, Shapiro says, but he wasn't consistent. If Reagan were running today, Shapiro can imagine superPAC ads referring to him as a "former liberal-Democrat" or "tax-raiser Ronald Reagan."

"The truth is that political figures, particularly when viewed from the lens of history, are far more complicated creatures than they are when they're viewed through the lens of bumper stickers," Shapiro says.

The Man Vs. His Legend

So how does Ronald Reagan compare to the modern definition of a Reagan conservative? David Stockman, Reagan's former budget director, tells Raz that he doesn't think Reagan quite matches up.

"Even though he was highly negative about the role of government ... he was also enough of a pragmatist to recognize facts," Stockman says.

The modern interpretation of who Reagan was is based on two things, Stockman says: a selective reading of history and a full-bore adoption of Reagan rhetoric.

"What the history books are going to show, I believe, is that the Reagan revolution never happened. It was a campaign slogan," he says. "Government wasn't reduced; taxes were cut marginally, but the basic functions of the federal government didn't change."

What is left, Stockman says, is a lot of slogans and campaign speeches that the current crop of Republican politicians like to repeat over and over.

"The Republican Party has given up the role that the conservative party needs to play in a democracy," he says. "As a result of surrendering that role, we're in a very difficult and I think dangerous position."