Accessibility links
Labs Size Up New Guidelines For Rodent Cages Mice and rats are the most common lab animals. That's why some influential new guidelines on how to house mother rodents and their babies have created an uproar. Some experts at research centers say there's no evidence that making costly changes will really benefit the animals. 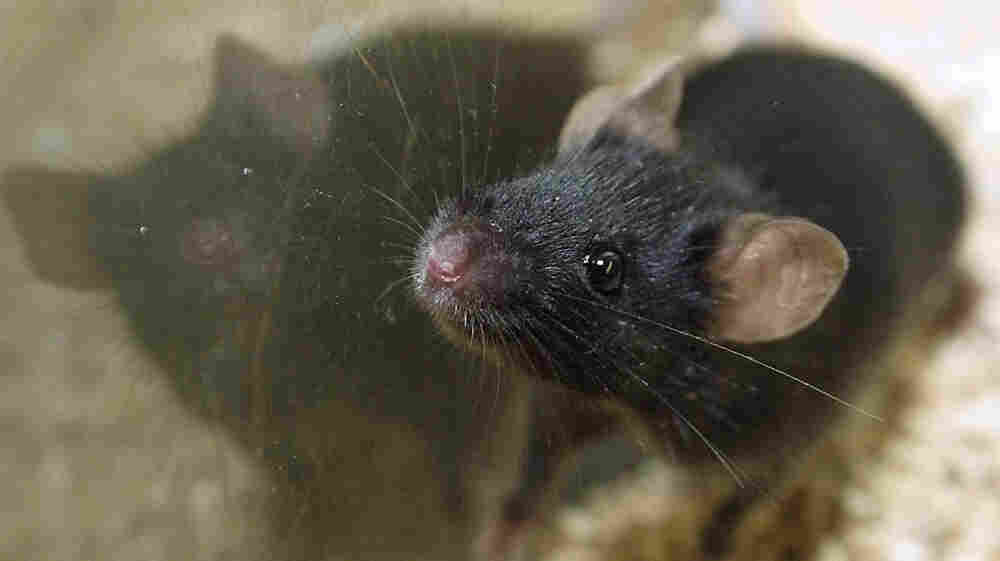 Scientists do experiments with millions of rats and mice each year, to study everything from heart disease to cancer to diabetes. Recently, some new recommendations about how to house female lab rodents and their babies caused an uproar, with experts at major research institutions now saying they're unsure of what they'll have to do to keep their government funding.

The importance of what we're talking about is the uncertainty of what this is going to do to us.

The new recommendations appear in the bible of lab animal care, officially called The Guide for the Care and Use of Laboratory Animals. All research funded by the National Institutes of Health (NIH) must comply with this guide, which was just revised for the first time since 1996.

There are a lot of changes in this edition of the guide, but the one that has the research world in a tizzy appears on page 57. It's a chart that lays out new recommendations for the minimum number of square inches of floor space that should be used to house female rodents and their babies.

Lab animal experts are worried that this means they won't be able to do certain kinds of rodent breeding in their institutions' existing cages.

And that's no small matter for places like Johns Hopkins University, a research powerhouse and the largest recipient of funding from the NIH. The university's main housing facility for rats and mice is nearly the size of a football field, with many rodents genetically altered and bred for specific kinds of research.

The facility has around 40 rooms, each of which holds about 1,000 clear plastic cages that are the size of shoe boxes; they fit into special racks that line the walls. 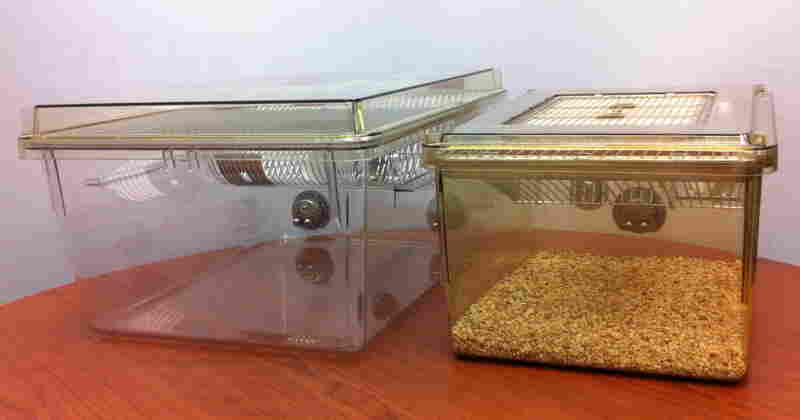 The standard rat cage used in the U.S. (right) has 140 square inches of floor space. One interpretation of the new guidelines says this cage wouldn't be big enough to hold a male rat, a female rat and their babies. Instead, labs would have to house the rat family in a larger cage, like the 210-square-inch one on the left. Courtesy of Joseph Thulin/Biomedical Resource Center, Medical College of Wisconsin hide caption 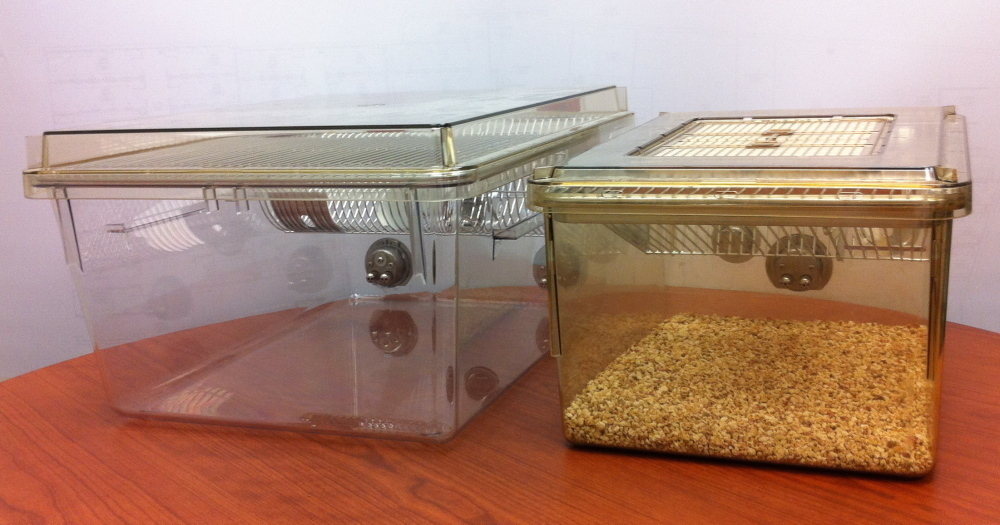 The standard rat cage used in the U.S. (right) has 140 square inches of floor space. One interpretation of the new guidelines says this cage wouldn't be big enough to hold a male rat, a female rat and their babies. Instead, labs would have to house the rat family in a larger cage, like the 210-square-inch one on the left.

If each cage contains one to five mice, says Bob Adams, the veterinarian in charge of this facility, that means his staff cares for around 200,000 rodents.

Each cage has its own ventilation and water supply, and the scientists who keep their rodents here pay a rent of 62.5 cents per cage per day.

To explain his concerns with the new guidelines, Adams pulls out one cage. Hairless pink babies squirm in one corner. There's a tangle of adults with dark fur over by the water valve. Adams says there's probably a male in here with a harem. One male plus two or more females can produce lots of mice quickly.

But as Adams interprets the new guidelines, this would no longer be possible in this shoe box-sized cage. The guide seems to say that its 75 square inches is big enough only for one mother and her babies, plus one other adult.

Adams is worried that Johns Hopkins may have to make major changes to keep its government funding.

"The effect would be, we would have to buy more of this caging, and our estimate was somewhere around $300,000 worth of caging, at least," he says.

He'd also have to find a place to put all those cages, and then hire more staff to manage them and wash them. "Bottom line is, there is more work, there is more cost for everybody, for our whole operation," he says.

Push Back From Research Institutions

Across the country, other research institutions looked at the new guide and came to the same conclusion. The National Association for Biomedical Research estimated that nationwide, implementing the new space guidelines for breeding rodents would likely cost hundreds of millions of dollars — money that then couldn't be used on research. Government regulators have been deluged with letters of protest.

One of them came from the Medical College of Wisconsin, which has one of the largest academic colonies of research rats in the world. Joseph Thulin, director of the college's biomedical resource center, says that animal welfare is important, but it's unclear that the new guidelines will result in any benefits.

"I would not want anyone to think that the research community doesn't want to implement new guidelines because they don't care about their animals. That is not the case at all," says Thulin. He says it's just that there's been very little research on rodent housing, and there's no evidence to support the idea that increasing the cage space in the way that's been recommended "will have any measurable positive impact on the animals."

Meanwhile, the people who actually wrote the new recommendations say all this concern is the result of a big misunderstanding.

"Certainly I personally was very surprised at the reaction or at the way some people were interpreting what was written," says Janet Garber, a consultant who chaired the committee of independent experts convened by the National Research Council to revise the animal care guidebook.

The old version had no specific guidance on how to prevent overcrowding when breeding rodents, and the panel simply thought it would be helpful to set some benchmarks. Garber says the numbers in the chart are not hard-and-fast rules, and research institutions have to look at their individual situations.

That's the position taken by the NIH. Patricia Brown, director of its lab animal welfare office, said in an email that she and her office "were surprised by the concerns," and that their experience was that labs currently house their rodents appropriately.

A statement on the NIH website indicates it still will be possible to put more breeding rodents in a cage than the guide recommends. And researchers say, that is somewhat reassuring.

But it won't be business as usual. Because the NIH statement goes on to say that if scientists want to do that, they'll have to justify it, and show that things like the animals' health or behavior won't suffer.

Plus, the government warns that "blanket, program-wide departures from the Guide for reasons of convenience, cost, or other non-animal welfare considerations are not acceptable."

All of that has left some experts confused. "I guess the importance of what we're talking about is the uncertainty of what this is going to do to us," says Adams, the Johns Hopkins veterinarian.

He points out that researchers have to meet the government's standards to safeguard their funding. So should the university shell out the money for more cages, when science budgets are already tight? Or try justifying their current practices to see if they're accepted? "We're going to have to thrash this out and see, how do we interpret this now?" Adams says.

All of this ambiguity has also displeased some animal welfare activists — for a different reason. They feel that researchers shouldn't have been given an out.

Kathleen Conlee with the Humane Society of the United States says overcrowding can be a real problem. Conlee says officials need to carefully scrutinize any efforts to breed rodents in less space.

"If we are going to be using millions or tens of millions of rodents in this country, we do have an obligation to the welfare of these animals and hope that the National Institutes of Health will strictly enforce their recommendations in the guide," she says.

The National Institutes of Health is taking comments on the rodent housing issue until the end of the month. And research institutions have about a year to evaluate their program and decide whether they need to make changes to comply with the new guidelines.