Accessibility links
From Martin Luther King Jr., A Burden And Gift In her commentary for MLK Jr. Day, Michel Martin recalls speaking with two women — one black, one white — of roughly the same age who witnessed the same lynching. Martin will never forget a particular comment from the black woman, and asks the broader question of what Americans should keep and leave behind on this day. 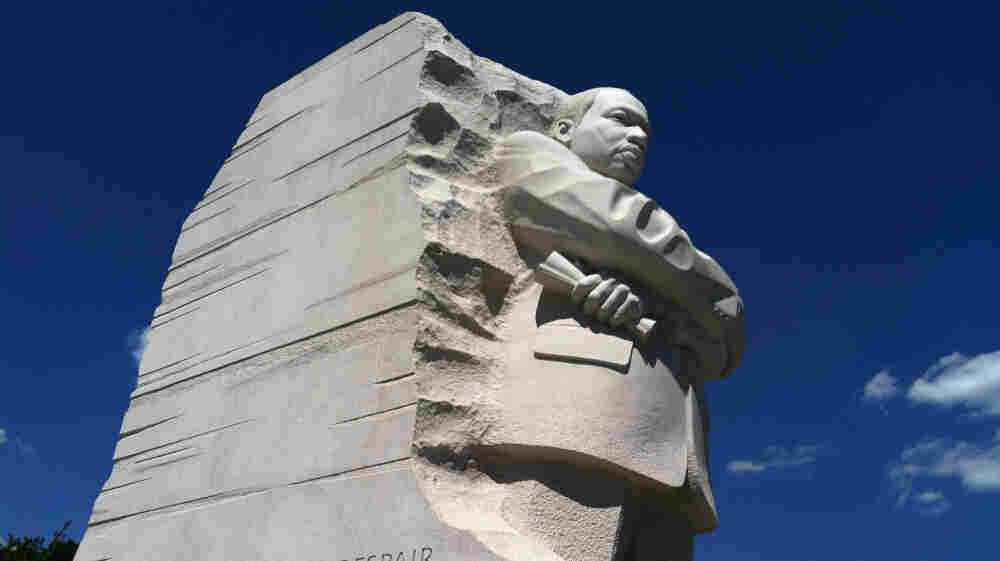 The statue shows King emerging from a stone extracted from a mountain. Amy Ta/NPR hide caption 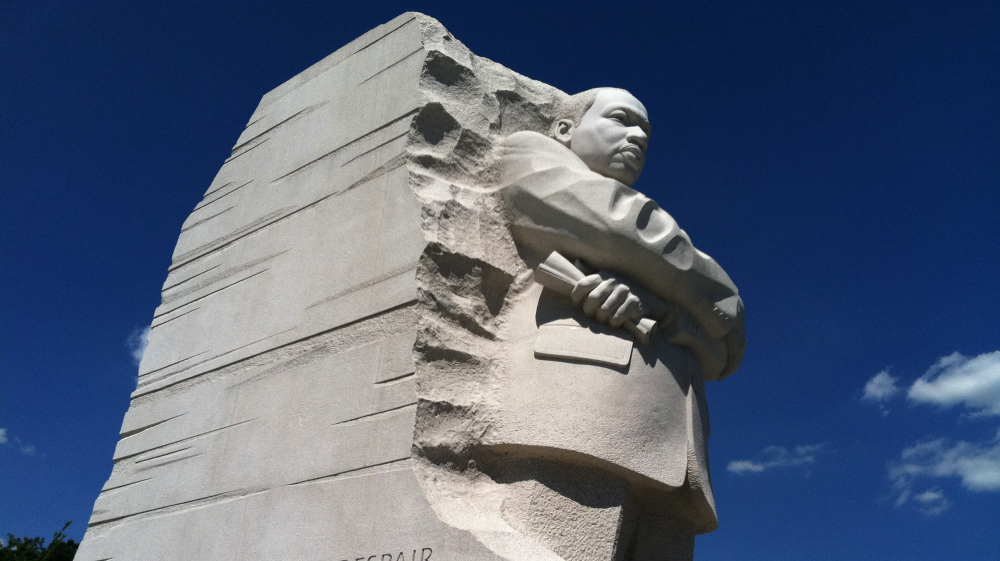 The statue shows King emerging from a stone extracted from a mountain.

As you can tell, if you managed to hear any or all of today's program, then you know that the central question we've been grappling with is what exactly does Dr. King's life and message mean to us now, some 43 years after his death and so many years after the largely successful conclusion of the specific campaigns that defined his adult life.

We're asking this question because you can see how the observance of this day could easily become one of those things you learn to do dutifully but secretly dread ... like a visit to your not-very-fun grandma, where you are forced to do without your video games while enduring cups of watery hot chocolate and interrogations about your posture.

That's not what we want.

What we are hoping for is a fresh take, an opportunity every year to pause and think about and do just what it is we need to do so that, to quote one of Dr. King's favorite scriptures: "Justice will roll down like the waters and righteousness like an ever flowing stream."

Can I just tell you? It seems to me that the real question is what do we keep, and what do we leave behind?

What do we take with us into the future — Dr. King's deep empathy, moral reasoning and personal courage? What do we leave behind — the pain, the struggle, the hurt?

Years ago when I was a correspondent at Nightline, I had the privilege of meeting two senior divas — one white, one black — who were almost exactly the same age and had both witnessed the same lynching. A real lynching, not someone's cheap metaphor. It was when they were both young girls.

I don't know what image people have of these things to the degree they think about them at all, but it was not some quick surgical strike. It was a long, drawn out horrific affair that involved torturing, then hanging, then burning the victim and dragging his lifeless body to the black side of town ... where it would serve as a warning to everyone who lived there.

What I remember most about that trip, predictably, was the stuff that never made it into the piece. The white woman we interviewed presented that classic image of southern female gentility. She served me and my camera crew tea and gave us a recitation of the facts as she remembered them. She didn't want to criticize anybody, but she made it clear that she knew then and later that whatever story she had been told about that terrible incident was not true. And that knowledge of untruth seemed to hover over her life. She had learned very early the power of the big lie.

Then we met the other senior diva — the black woman — and she was as sweet as could be too. Or so it seemed until we began to roll tape. She told us about the everyday hell that was her life. She remembered having to carry her father's dinner to him as he worked in the fields every day. She told us of the ugly things the white men and boys would say to her as she walked, and how some would grope her young body just because they could.

And this is the part I'll never forget: At one point, she leaned to the side to look past me, to look at our white sound engineer directly in the face as she said, "Sir, I don't mean any harm, but this is how I learned to hate white people."

My sound engineer told me later that it was one of the worst days of his life.

What do we keep? And what do we leave behind?

Far be it for me to tell anyone who has suffered such trauma when and how they should get over it. But we can ask ourselves, like that black lady had, to try. And we can ask ourselves, like that white lady had, 'what deeper truths are there that perhaps we do not see?' If nothing else, we might use this day not to ask, 'what would Martin King do if he were here,' but 'what should we do?'

Like the treasures in grandma's chest, some things don't fit or make sense ... but some things should and will and must endure. That is the burden and the gift that Martin Luther King gives us today.