Accessibility links
Huntsman Expected To Quit Race, Endorse Romney Campaign officials said the former Utah governor will announce his withdrawal today at an event in Myrtle Beach, S.C. Huntsman's resume had suggested he could be a major contender, but his brand of moderate civility never took. 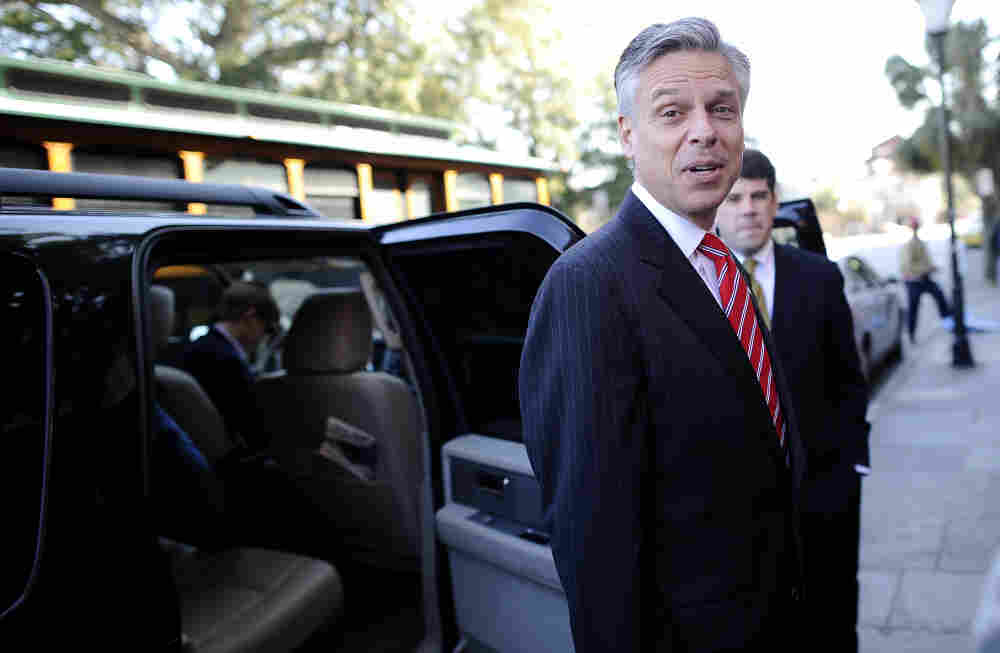 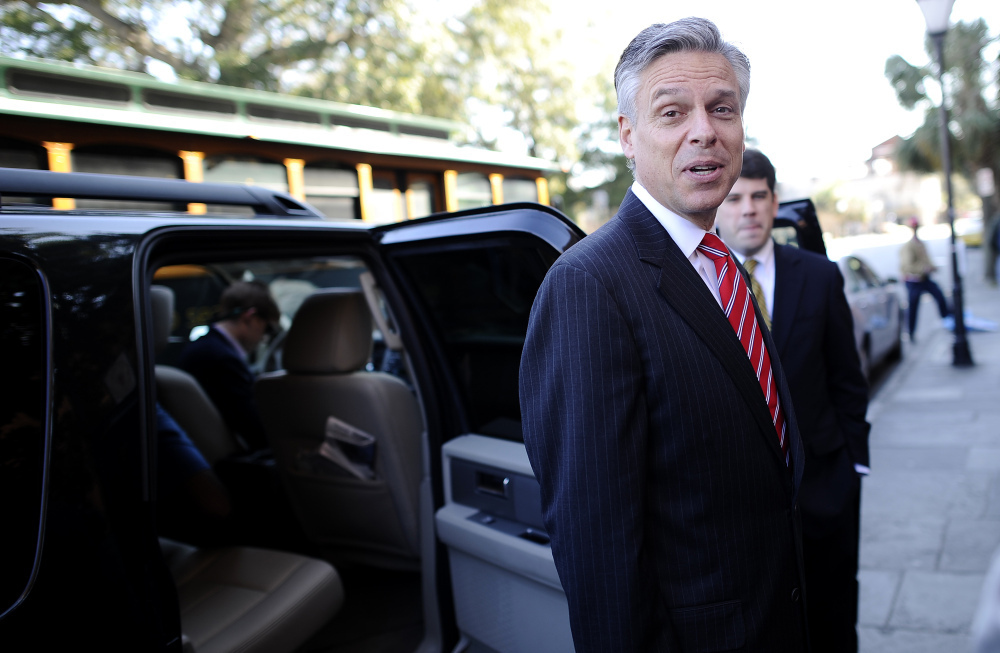 Jon Huntsman staked his presidential campaign on New Hampshire and his bid to become a legitimate competitor on distinguishing himself from front-runner Mitt Romney. But less than a week after a disappointing third-place finish in the Granite State's GOP primary, Huntsman decided to quit the race and back Romney.

Huntsman will endorse Romney, officials said Sunday, because he believes Romney is the best candidate to beat President Obama in November. Campaign manager Matt David said Huntsman will announce his withdrawal at an event in Myrtle Beach, S.C.

Huntsman's resume had suggested he could be a major contender for the Republican presidential nomination: businessman, diplomat, governor, veteran of four presidential administrations, an expert on China and on foreign trade. But the former ambassador to China in the Obama administration found a poor reception for his brand of moderate civility that he had hoped would draw support from independents, as well as party moderates.

No 'Ticket To Ride'

As NPR's Tamara Keith reports, from the start, Huntsman wasn't a typical candidate — and that's ultimately what held him back in a primary that rewarded conservatism.

Huntsman is the only one out of all the leading GOP hopefuls who never even briefly surged to second place in the polls. He peaked in New Hampshire, where he had spent almost all of his time, for months. He even appeared on Saturday Night Live to joke about his apparent obsession with the Granite State.

"I love all of America, from Dallas, Texas, to Manchester, N.H.," Huntsman told the audience. "From the majestic Rocky Mountains to New Hampshire's scenic Lake Winnipesaukee, from the innovation of Silicon Valley to the affordable outlet malls in North Conway, N.H."

But all that campaigning didn't exactly pay off on primary night.

"I'd say third place is a ticket to ride, ladies and gentlemen. Hello South Carolina," he said to supporters after the results were in.

As we now know, South Carolina is where Huntsman's ride ends.

It all started back in June with a series of Internet videos showing the candidate riding a dirt bike through the Utah desert with slightly twangy music playing in the background. In white lettering on the screen of the last video was this message: Tomorrow. The candidate for president who rides motor cross to relax.

"I think he'll be remembered as that nice, interesting, smart guy that never had anything to say other than, 'Elect me because I can be more civil,' which isn't exactly a winning message in a Republican presidential primary," Stutzman told NPR.

Stutzman said GOP primary voters are angry at the president but that Huntsman didn't give them any red meat. He also noted Huntsman's uneven debate performances.

"At times he gave very interesting insightful answers and then at times he seemed to be telling inside jokes," Stutzman said.

While Huntsman was often critical of his former boss he joined those saying Obama had failed as a leader and occasionally jabbed at Romney, he spent more of his time in debates pushing his own views for improving the economy rather than thumping the president or his opponents.

Although Huntsman was viewed as having little chance of finishing strong in South Carolina, his endorsement of Romney could give the former Massachusetts governor, who leads in state polls, even more of the look of inevitability.

The move comes as pressure has been increasing on Texas Gov. Rick Perry to leave the race in order to allow South Carolina's influential social conservatives to unify behind either former Pennsylvania Sen. Rick Santorum or former House Speaker Newt Gingrich.

Huntsman was conservative in matters of taxes and the reach of the federal government, but he was out of step with most conservatives in his support of civil unions for gay couples. On matters of science, he poked fun at his skeptical rivals in a pre-debate tweet: "To be clear. I believe in evolution and trust scientists on global warming. Call me crazy."

In the end, Huntsman didn't seem to register, crazy or otherwise, with Republicans looking for an alternative to Romney or a winner against Obama. He was routinely at the bottom of national polls, barely registering at 1 or 2 percent, a reflection of the faint impression he made in the GOP debates.

His campaign put all its emphasis on the New Hampshire primary, hoping that face-to-face politicking in the first-in-the-nation primary would pay off with a strong second-place finish or a surprise victory in Romney's backyard. While other GOP candidates spent December in Iowa, the Huntsman campaign ignored its leadoff caucuses, where social conservatives were all but certain to give him short shrift.

Central to Huntsman's New Hampshire strategy was its open Republican primary, which allowed independents to vote along with declared party members. He gambled that he could attract moderate voters, Republicans and independents alike, by presenting himself as a successful conservative leader who wasn't interested in engaging in a culture war.

With reporting from NPR's Tamara Keith. Material from The Associated Press was also used in this story.