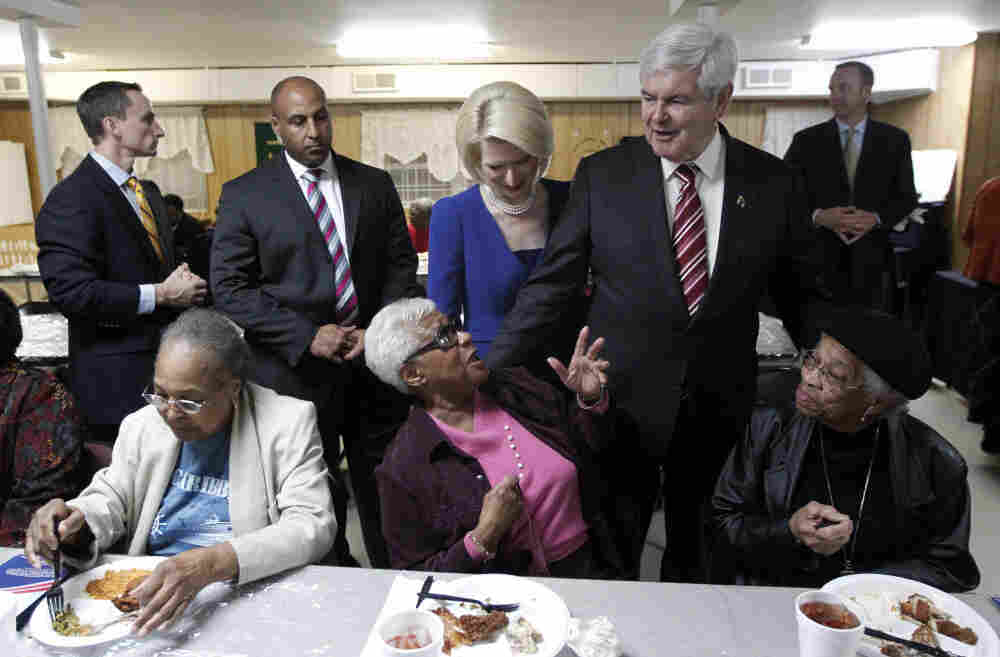 All of the Republican presidential hopefuls take on President Obama in their stump speeches, attacking his health care plan, his jobs record and more.

It's a theme Gingrich has used since Iowa, and he returned to it during a forum in Charleston, S.C., over the weekend.

"Over here you have a policy which, with Reagan and me as speaker, created millions of jobs — it's called paychecks. Over here you have the most successful food stamp president in American history, Barack Obama," Gingrich said.

South Carolina Rep. James Clyburn, who is black, says it is no longer the "welfare queen," a line oft-touted by Ronald Reagan, but "king of the food stamps."

"I guess a lot of people see it as, if Ronald Reagan can do it and be so lionized by conservatives, then I ought to be able to do it," says Clyburn, the third ranking Democrat in the House.

Clyburn says it's an old strategy: candidates using race as a wedge to get votes.

"That is something they have been told will work to connect the president as being a black-oriented president, taking away from somebody else to give to black people," he says.

That depends on the perception that African-Americans benefit disproportionately from the food stamp program, even though blacks are not the majority of food stamp recipients.

But former Oklahoma Rep. J.C. Watts — a black Republican who is campaigning for Gingrich in South Carolina — says that's not what the debate is about.

"I think you have sensitivities, things that happen on both sides that I personally might not like, but I think it is a fact that more people [are] on food stamps today because we don't have jobs," Watts says. "And that shouldn't be the economic policy of our country."

While Gingrich has received the most attention for linking the nation's first black president to food stamps, some of the other Republican candidates have also had to defend perceived racial insensitivities.

Nothing in this year's contest, however, has reached the level of a notorious race-based whisper campaign in the 2000 South Carolina primary.

"I think the marker everybody remembers is the story in the McCain campaign — McCain's got a black child ... which is all very quiet but aggressively done," says University of South Carolina political science professor Mark Thompkins.

Thompkins says race is one of several tools employed in the rough and tumble of South Carolina politics. Gingrich's food stamp line is more subtle, he says, but sends a message.

"That Newt is going to take care of us and not take care of them," Thompkins says. "And there's an 'us and them' quality to this kind of language, which is pretty rough stuff, right? But that's the code."

Black voters were picking up on it Saturday, when Gingrich held a town hall at Jones Memorial AME Zion Church in Columbia.

In attendance that day, Raushane Thompson questioned Gingrich about the characterization. Gingrich said it's not about the president — it's about his policies.

"I say that because more Americans today are on food stamps than in any other time in American history, and I think we need a policy that creates jobs and allows Americans to have a job and to have a paycheck," Gingrich said.

Howard Furch turned out to hear Gingrich at a statehouse rally in Columbia. He thinks the food stamp line is less about race and more about whether the candidates get what it's like to struggle to put food on your table.

Furch raised a question sure to be heard again in the fall: Are middle-class voters feeling more resentment toward the rich or toward taxes that pay for programs, like food stamps, intended to help the poor?