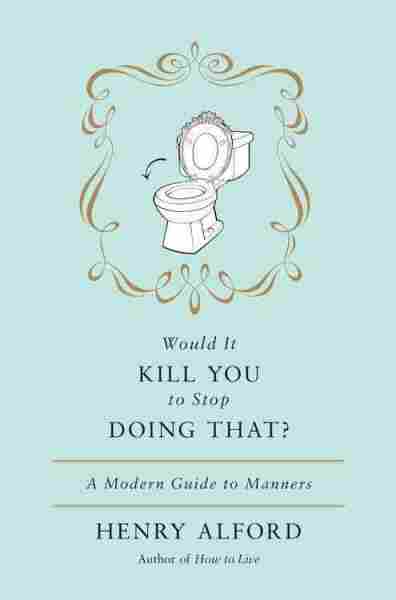 We've all witnessed bad manners: The rider who showers the bus with his uncovered sneeze; the woman who cuts into the movie line; the person texting mid-film at the movie theater.

But while we know bad manners when we see them, good manners can be harder to define. What's the problem with saying "No problem" as a substitute for "You're welcome"? Is it acceptable to answer a phone call with an email? Is it offensive to ask a taxi driver where he's from?

In his book, Would It Kill You to Stop Doing That?: A Modern Guide to Manners, author Henry Alford tries to uncover the purpose and principles of manners — and what's happened to them in our fast-moving, increasingly interconnected culture.

A Modern Guide to Manners

Title
Would It Kill You to Stop Doing That?
Subtitle
A Modern Guide to Manners
Author
Henry Alford

Alford chronicles his travels in Japan, interviews with etiquette experts and time spent volunteering as an online etiquette coach, all in search of how things might look if people were on their best behavior a little more often.

On why societies developed social codes and etiquette

"When people really needed etiquette for the first time was [sitting] on these forms of public transportation, because you were placed in close proximity with total strangers."

On the origins of many "Southern" manners

"A lot of the things that we think of as being quintessentially Southern manners — things like the expression 'y'all come,' or using 'aunt' or 'uncle' for nonrelations, or using a first name with an honorific, like 'Mr.' Neal or 'Mr.' Henry — a lot of that stuff came from household slaves. ... Plantation owners very often would give the care of their children over to the household slaves, who had been high-ranking members of their tribes in Africa and who had a lot of deference and who passed on these really lovely habits onto the plantation owners' kids."

On how the digital age is changing our expectations of others

"A tricky part about ... the ease of the Internet is that, now that we can bank and live our lives and do all these things instantaneously online, we have much higher expectations about our offline, person-to-person interactions. We're much more impatient. ... Suddenly dealing with an actual breathing human being feels very hand-crank, and we in turn become very hand-cranky."

On how to respond when strangers address you with pet names

"I am someone who has been doll-faced all his life. I think what you have to do there is just grin and bear it. But if the person does it repeatedly or frequently, then I think what I would be tempted to do is to launch into what I call retaliatory manners, and that is to say, I would 'hon' a 'hon,' I would 'doll face' a 'doll face.'

In-Flight Etiquette: How To Keep Peace In The Cabin

"If you throw it back in their faces, what it does, it just forces them to realize, 'Oh, well, I don't really love it when people call me that name.' "

On ignorance as the origin of bad manners

"I think it's really important that we cop to our own bad manners. Part of the book is this idea that so many of our manners are based in ignorance. I have a chapter where I ask people of various professions: What rude questions are you asked? And they're almost always based in ignorance, like people who ask doctors how long have you been practicing; or students who ask teachers, once they've missed a class, 'Did I miss anything last week?' ... as if to suggest that some weeks we just stare at the doorknob for two hours; [or] people ask lawyers, 'Are you billing me for this call?' "

On the importance of admitting when we've been rude

"Yeah — I, myself, have been guilty of bad manners. I'm someone who, until last year ... would ask someone with a heavy foreign accent, 'Where are you from?' because I love to travel and hear about exotic lands. And if that person lives in the United States, it's very possible that that's a rude question ... because that's someone who probably wants to be perceived primarily as American ...

"If we're going to change manners — which I hope we will do — we've got to each cop to ... our own misdeeds. And I think that's part of why this book has gotten such nice attention from book groups, is because it can lead to a conversation, not only about what are your pet peeves, but also what are some of the things that you yourself do unintentionally that ... that bring distress to other people."

Read an excerpt of Would It Kill You to Stop Doing That?