Accessibility links
New Recycling Company Springs From Old Mattresses Old mattresses are among the worst kinds of household waste — recyclers don't want them, and neither do most landfills. A new business that started as a college project hopes to move mattress recycling into the mainstream, employing former convicts in the process. 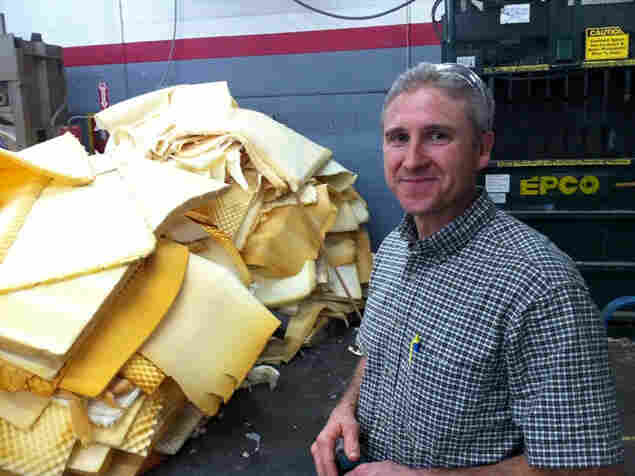 After months of practice, Ron Harness has the process of dismantling an old mattress down to a science. Blake Farmer/WPLN hide caption

After months of practice, Ron Harness has the process of dismantling an old mattress down to a science.

Old mattresses are among the worst kinds of household waste: Most recycling companies won't touch them, and landfills would rather not. But a new business in Nashville that started as a college project hopes to move mattress recycling into the mainstream — and employ former convicts in the process.

Cutting into a mattress at Nashville's Spring Back workshop, Ron Harness runs his box cutter around a queen-size bed to fillet the fabric, in a process he admits is labor intensive. Even the best processing machines can only chew up a used mattress; recycling one requires manual labor.

Harness rips off a cotton sheet, peels away a layer of foam, and shoves the steel springs into a baler, where they'll be compacted into a manageable clump. Harness has deconstructing a mattress and box spring down to a science. He keeps one eye on a stopwatch.

Efficiency is the key to this enterprise. Otherwise, there's not a ton of competition for used mattresses.

Even though they contain an average of 25 pounds of steel and foam that can be chopped up for carpet padding, recycling companies usually refuse to take a used mattress.

"They've always been viewed as something you can't tackle," says Bobby Bandy, founder of EarthSavers, a recycling firm. "It needs to go in the landfill — and the landfill guys don't want it."

Mattresses don't easily pack down like some other trash. More than a dozen states do have at least one recycler, but it's usually small in scale. So most mattresses find their way to landfills, according to an industry trade group.

A few beds are diverted from the dump by being reused.

"We partner with several people who remove mattresses and reconstitute them into new products," says Andrew Bloomfield of Mattresses Unlimited.

Those new products are made from old springs that get a new cover, to be sold in discount showrooms. But instead of feeding into the used mattress market, Bloomfield's company, which operates in five states, is now trying Spring Back.

Salesmen are playing up the partnership, telling customers their old beds will be recycled. If the environmental benefits aren't enough, the enterprise also puts ex-convicts to work.

Back in the Spring Back workshop, Ron Harness pulls at a stubborn spring. With a pair of pliers, he began yanking a thousand coils out of a king-size bed. He has helped refine the recycling process, but just a few months ago, Harness was behind bars for a serious misdemeanor charge.

He started working with Spring Back through an organization associated with Nashville's Belmont Church called Isaiah 58. 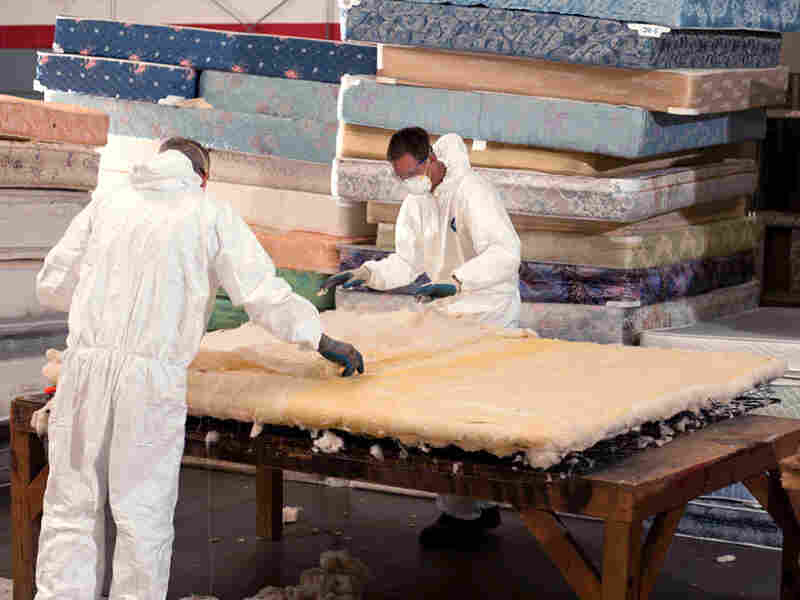 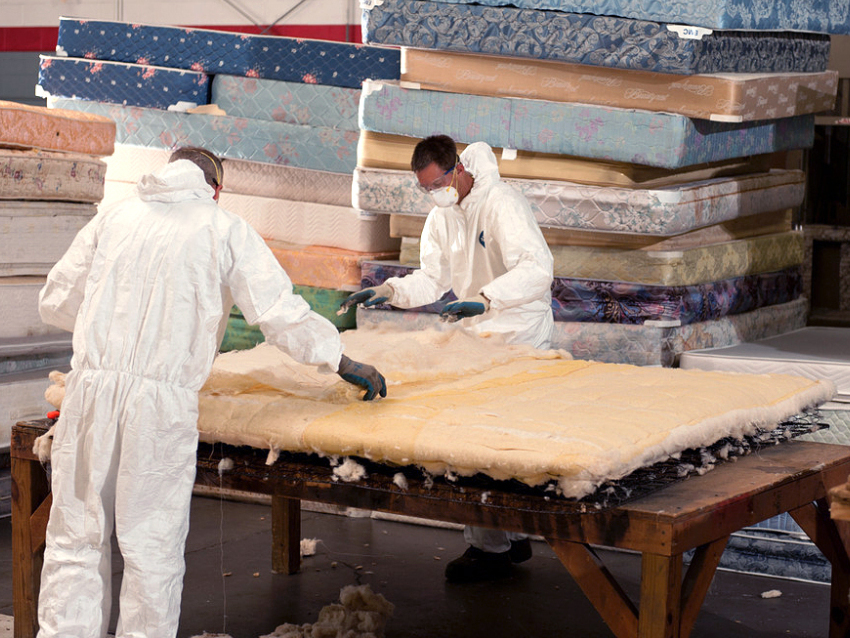 Men dismantle a mattress into reusable parts at the Spring Back recycling project in Nashville, Tenn.

"Didn't know where I was going to go," he says. "The street was an option."

Providing meaningful employment for hard-to-hire workers is where this venture doubles down on its social mission. Last April, the business plan from students at Belmont University took first place in the national Values and Ventures Competition. Part of the $10,000 prize became seed money.

"This is — in my opinion — very rare and very unique," says Belmont University finance professor John Gonas, who has taken the reins of the startup. Still, he says, like most new for-profit businesses, very few social enterprises succeed.

"We've actually tried lots of different things," Gonas says. "We had a sewing project one year that didn't work, with refugees." In that project, women from Burundi made beautiful pillows — just not fast enough.

The mattress business, on the other hand, is approaching an all-important break-even point, when revenues cover the operating costs. Gonas says he hopes to license the model in other cities and get Spring Back operations popping up all over the country.