Accessibility links
Cleaner Air In L.A. Ports Comes At A Cost To Truckers The twin ports of Los Angeles and Long Beach have some of the dirtiest air, thanks to thousands of old diesel cargo trucks that pass through each day. But new emissions standards just went into effect banning those old trucks. Neighboring communities are breathing a sigh of relief, but the restrictions are taking a toll on low-wage truck drivers. 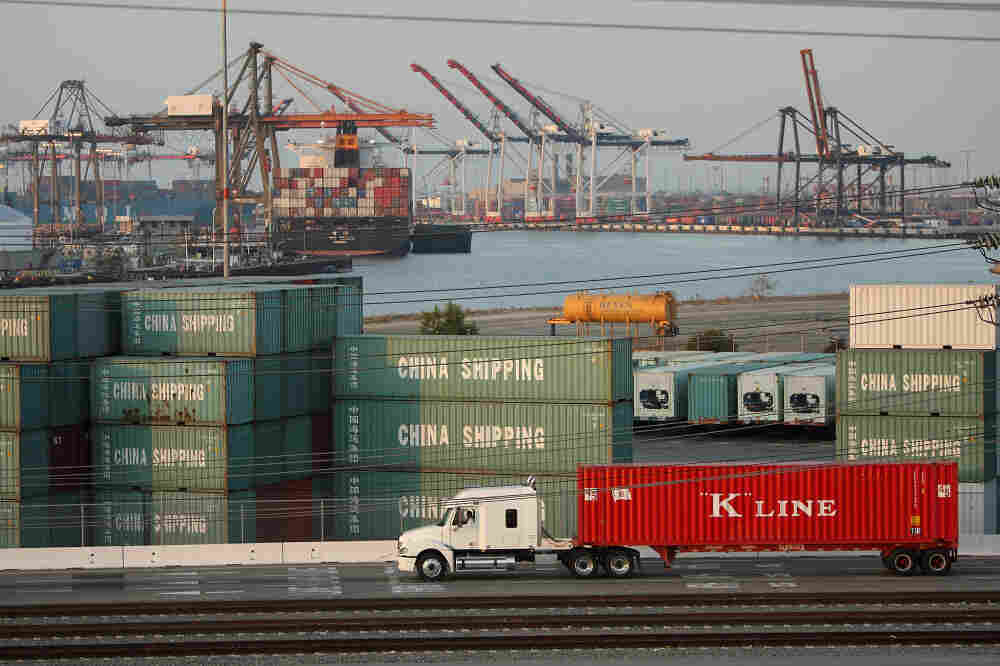 A truck passes shipping containers at China Shipping at the Ports of Long Beach and Los Angeles, the busiest port complex in the U.S., near Long Beach, Calif. Stricter emissions standards have cut down on air pollution from the trucks, which has been one of the most significant sources of air pollution in California for many years. David McNew/Getty Images hide caption

The twin ports of Los Angeles and Long Beach are the busiest in the nation. They also have some of the dirtiest air, thanks to thousands of cargo trucks that pass through each day.

But this month marks the beginning of a new era, as tighter emissions standards go into effect.

A common trope in environmental stories is to put things in terms of jobs vs. the environment. But that's not what happened in the case of the ports.

Pedro Melendez starts the engine of his shiny new big rig, which he drives for a living. He uses it to haul containers of stuff made in China from the ports out to warehouses, where they're sent to stores and sold to us. As his truck warms up, Melendez points to the exhaust pipe. Instead of black diesel smoke, nothing comes out.

The Clean Truck Program has taken a progressive approach to banning dirty trucks, enacting stricter regulations every few years since 2008.

Oct. 1, 2008: All trucks manufactured before 1989 are banned from entering the Port of Los Angeles.

Jan. 1, 2012: All trucks that do not meet the 2007 Federal Clean Truck Emissions Standards are banned from the port.

In the first year of the program, port officials estimate that it reduced pollution from trucks by about 70 percent. The program estimates that this year's standards will bring the total reduction to about 80 percent.

The truck runs on liquid natural gas. Melendez bought it with help from a grant thanks to the Clean Truck Program, sponsored by the Ports of Los Angeles and Long Beach.

Over the past few years, the ports have offered incentives to purchase new, clean trucks, while phasing out older dirty ones. And since the first of this year, trucks that don't meet 2007 EPA emissions standards are banned altogether.

"The trucks here at the port now meet the strictest clean air and safety standards of any major port in the world," Los Angeles Mayor Antonio Villaraigosa says.

Villaraigosa was key in developing the program and recently threw a little celebration for it at the Port of Los Angeles.

"We figured out a way to do both — to clean our environment, to grow good jobs," he says.

The clean trucks program has replaced more than 10,000 old trucks, and emissions at the ports have dropped nearly in half. David Pettit of the Natural Resources Defense Council says without so much diesel soot and ash clogging the air, communities will be healthier.

"The challenge here was to clean up what's often called the diesel death zone," Pettit says. "There's a bull's-eye of increase in cancer risk right here at the ports, and then it kind of creeps out along the truck routes, and it was a serious public health problem."

The pollution is also a personal health problem for Kimberly Melendez, the 15-year-old daughter of trucker Pedro Melendez. They live just a couple of miles from the ports, and the diesel exhaust aggravated her childhood asthma. But since the clean truck program got under way, Kimberly has noticed an improvement.

"The air is way more cleaner than how it used to be," she says. "The smog isn't as dark."

Cleaner At What Cost? 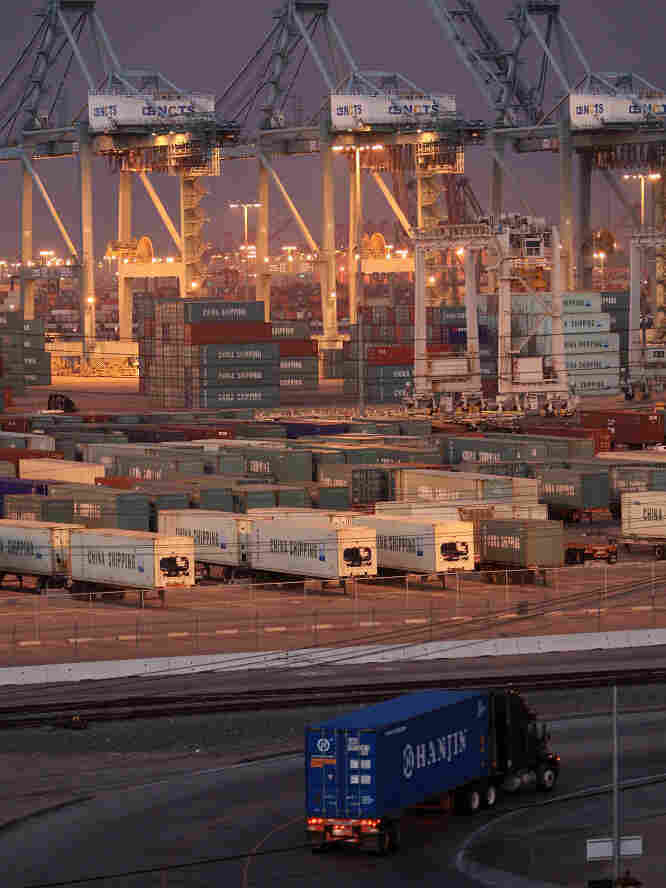 Trucks at the Ports of Los Angeles and Long Beach often idle while they wait to be loaded and unloaded, adding to the pollution. David McNew/Getty Images hide caption 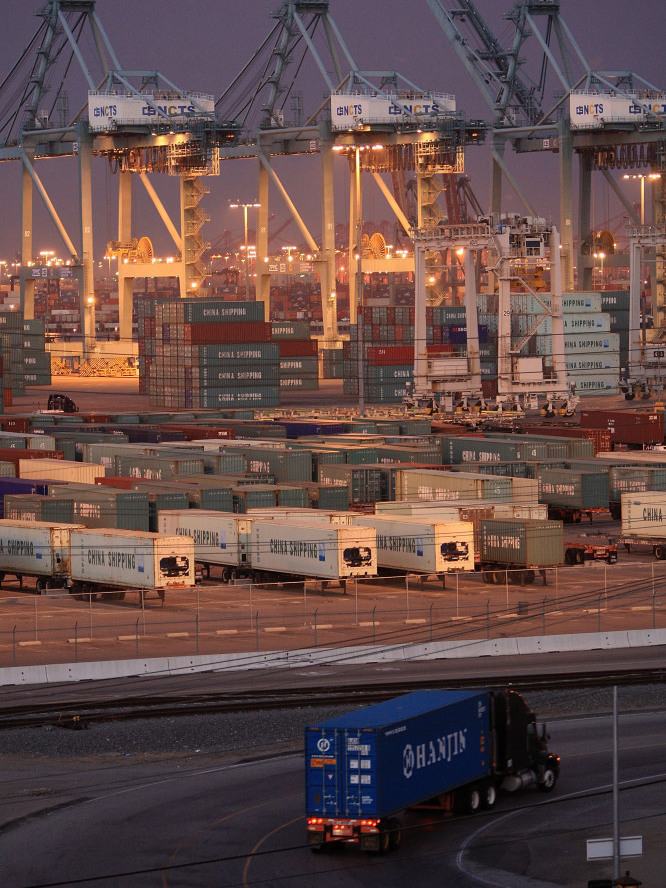 Trucks at the Ports of Los Angeles and Long Beach often idle while they wait to be loaded and unloaded, adding to the pollution.

Bell lives near the port, his son has asthma, and he's happy about the cleaner air, too.

"At the same time, you know, I didn't suspect that the truckers would end up paying the costs," Bell says.

Like a lot of truck drivers, Bell had paid off his old truck years ago. To replace it with a new one, he took out a loan, and took on payments of $1,300 a month. And the maintenance of these high-tech trucks costs a lot more. Because Bell is an independent truck driver, he has to cover all this.

"I mean, I've been working my butt off all this time, and I have basically nothing to show for it," he says.

A plan that would have shifted the costs of the new rigs from individual truckers to trucking companies failed in court after a complicated legal battle.

While Bell isn't ready to blame his money troubles on the move to clean up port air, he says the effort has come at a cost. The question is, who should pay?