Accessibility links
Nicholas Money: The Man Who Studies The Fungus Among Us Botanist Nicholas Money's book Mushroom takes readers inside the world of the fungal organisms that appear overnight on lawns, are occasionally poisonous and appear in everything from Alice in Wonderland to some lifesaving medications. 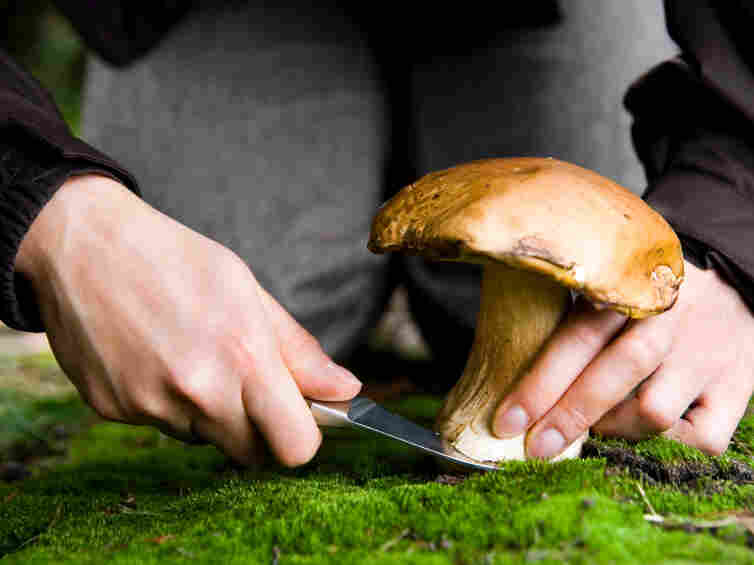 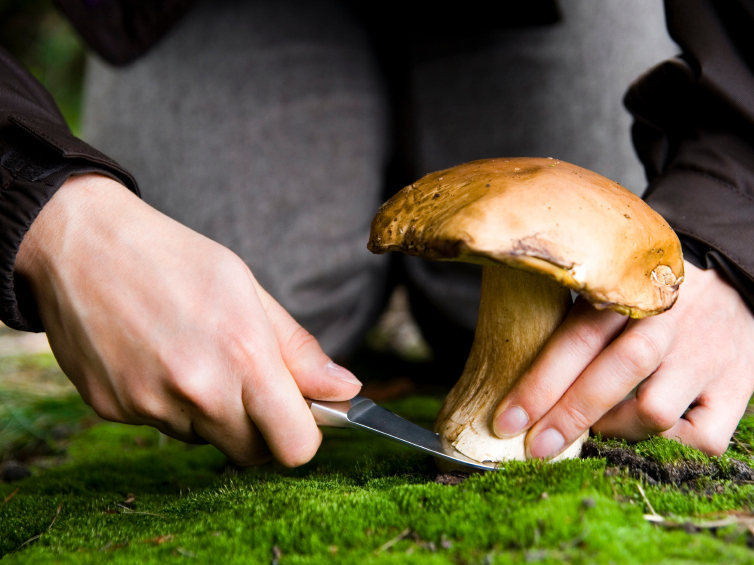 The Shroom With A View: Mushrooms are fleshy, spore-bearing fruiting bodies found all over the world. They can grow in practically any environment with moisture.

For the past 30 years, botanist Nicholas Money has studied the microorganisms that most people associate with bad smells, itchy toes, damp basements and rotten food. A renowned fungal researcher at Miami University in Ohio, Money has devoted his career to studying indoor molds, fungal movements and the mysterious world of mycology.

Why mold and mushrooms?

"As a biologist, there's so much to revel in, when we really study the fungi," he tells Fresh Air's Terry Gross. "This is a fantastic kingdom of microorganisms, and far more interesting than the animals and the plants."

In his book Mushroom, Money explores the history and science behind the fungal organisms that appear overnight on lawns, are occasionally poisonous and sometimes end up in our medications and on our dinner plates. But not every fungus among us produces mushrooms, he says. The term "mushroom" is used to describe the fruiting body of various types of mostly gilled fungi, with or without stems. (Gills are the papery, riblike ridges under the cap of some mushrooms that help the mushrooms disperse spores.) 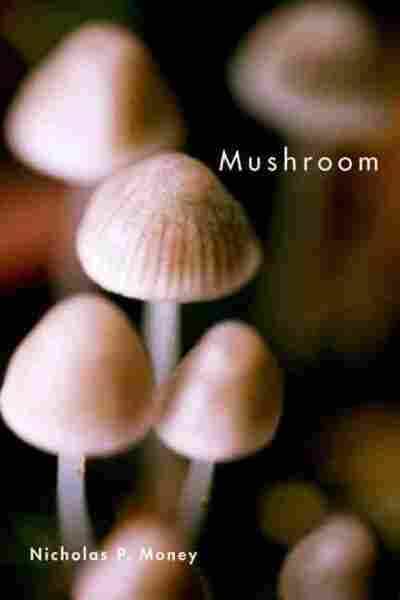 Mushrooms sometimes grow in places you really don't want to see them: on ceilings and in basements, in bathrooms and in crawl spaces. Money says one of the most alarming places he ever saw a mushroom was in the back of a person's throat.

"This was actually photographed in some very unfortunate individual whose immune system was really crashing," he says. "A mushroom growing in that area is something none of us want to experience."

Mushrooms grow everywhere, says Money, because fungal spores are literally everywhere. All they need is a food source — which can come from any damp place.

"Every breath that we take — from first gasp to last breath — we're inhaling fungal spores," he says. "They're always available, they're always in the air, and they're always trying to exploit the opportunities to grow and reproduce."

Mushrooms are fungal sex organs, and they have a strange way of reproducing. It's hard to see with the naked eye, so Money takes ultra high-speed video of mushrooms releasing their spores from their fertile surfaces. He then slows down the tape to watch what happens next. It's a good thing he does: Individual mushrooms can release as many as 30,000 spores a second and billions of spores in a day.

"The mechanism in mushrooms involves tiny droplets of fluid [that] are about the same size of the spore, and they condense on the spore surface under wet conditions and then they coalesce — they jump together — very, very swiftly," he says. "This is on a time scale of millionths of a second. And it's that very fast movement in the center of the structure that kicks [the spores] into the air. ... It really is extraordinary."

By slowing down the action, Money can look at the biomechanics of mushroom reproduction, which he says scientists are still struggling to understand.

"It really is an extraordinary thing biomechanically — there's nothing else like this in the living world," he says. "If we scale this up to human dimensions, if we were jumping off gills, we'd be moving at 500 times the speed of sound to really match the prowess, the elegance of this fungi."

Humans have been eating savory morels and chanterelles for thousands of years. Edible mushrooms have been found in ancient Greek and Roman ruins, in China and in Chile. The Romans even employed a food taster to make sure the mushrooms for their leaders were safe and not poisonous.

Though Money says he personally prefers his mushrooms in a lab, he says the edible varieties provide a variety of health benefits.

"They're not a tremendous source of calories, but we eat them for texture and flavor. They're a wonderful addition to the diet."

But some edible mushrooms, he warns, also have hallucinogenic properties.

"There are a number of species that contain alkaloids, which are the chemicals that interact with our nervous systems in very, very specific ways," he says. "The fly agaric mushroom, this iconic one with the red cap and the white spots, contains a few hallucinogenic compounds that apparently give one the sensation of flying."

Researchers at Johns Hopkins University in Baltimore are currently working with psilocybin, a psychedelic compound found in more than 200 species of mushrooms, in highly supervised lab studies to see how people react to the hallucinogen, which mimics the effects of serotonin on brain receptors.

"These people are going on mushroom trips in the lab setting, and months later, in the follow-up studies, they say that the experiences they had under the influence of the mushrooms are among the most profoundly moving experiences of their lives, both positively and negatively," says Money. "One thing that the researchers are looking for [is] to see if the use of these hallucinogenic compounds can improve the quality of life for patients suffering from terminal diseases, since it really seems to be, for the majority of people who actually take these compounds, that it's actually an uplifting experience. These could be used in a therapeutic setting and perhaps be very powerful in the future." 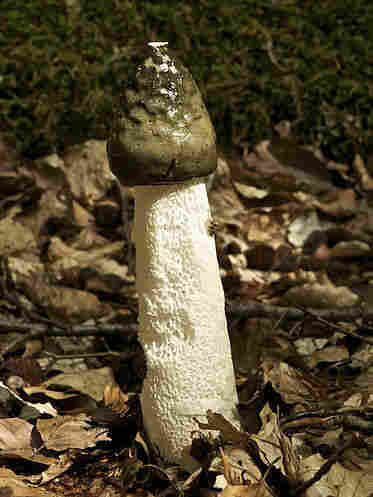 The Phallus impudicus is also called the common stinkhorn. It smells like a dead animal, but is not poisonous. Jorg Hempel/Wikipedia hide caption

On one of the oddest mushrooms studied

"I was contacted by some Chinese researchers last year, and they discovered the single largest fruited mushroom — with the largest fruit body — on the planet. They discovered it on some tropical forest on an island. And this particular mushroom is 10 meters long, it weighs half a ton, and this thing sheds a trillion spores a day. So beware, anybody with asthma standing close to that mushroom."

On a phallic mushroom with a foul odor called Phallus impudicus

"There's a number of this phallic, foul-smelling mushrooms that we find in tropical ecosystems, but they do grow in the United States and elsewhere. These are mushrooms that have actually given up this mechanism of spore discharge from gill surfaces. ... They've done so in favor of dispersing their spores using insects to actually suck up the stinking spore mass. As the insects fly away, they deposit the spore mass away from the parent mushroom. ... The phallic shape actually makes sense in the terms of carrying this stinking spore mass into the air. The mushroom has to achieve this erection from a buried egg. And this thing will be up to 5, 6 inches long and attract slugs and snails and flies toward this horrible mass of spores."

The phallic shape actually makes sense in the terms of carrying this stinking spore mass into the air. The mushroom has to achieve this erection from a buried egg. And this thing will be up to 5, 6 inches long and attract slugs and snails and flies towards this horrible mass of spores.

On allergies and mold and fungi

"I was quite asthmatic as a kid; it's something I grew out of in adulthood. I'm not sure we could ever prove that fungi were the cause of my allergies, but I remember my mother removed the carpet from my bedroom and went to extraordinary lengths to try and create this clean living space in which I wouldn't suffer from these asthma attacks. It's rather ironic, from having suffered as an infant from probable exposure to fungal spores, that I then spend the next many decades of my life studying fungi."

On the perils of working with fungi

"I had an awful outbreak of jock itch when I was a grad student working in a lab where we were really immersed in fungal spores. They were everywhere. I think everyone in that lab got a skin infection. It was really unpleasant seeing this pinkish circle expanding, ever expanding ..."

Read an excerpt of Mushroom