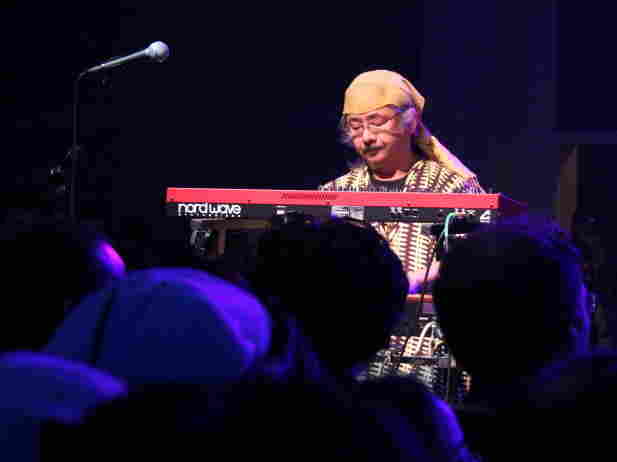 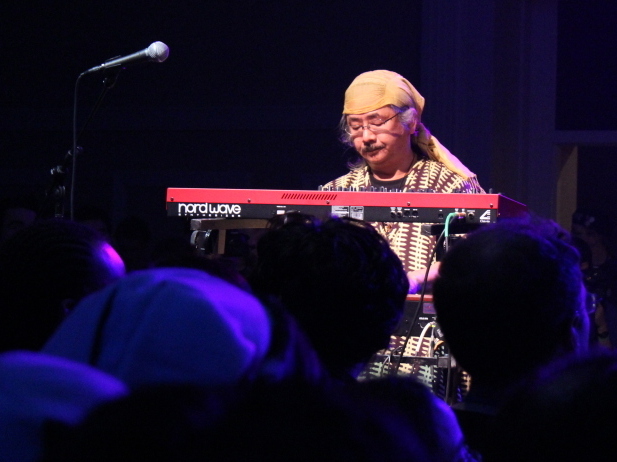 Nobuo Uematsu plays keyboard with Earthbound Papas, a rock band made up of video-game soundtrack composers.

Every year, thousands of video-game fans flock to the Washington, D.C., metropolitan area for a unique music festival called MAGFest. It's short for "Music and Gaming Festival," and it's designed to celebrate the music of video games.

As video-game technology keeps improving, the graphics become crisper, the action faster, and the sound quality richer. But for many gamers, the music from video games was best in the earlier days of low-tech 8-bit and 16-bit game systems.

Beyond The Limits Of Technology

In 1995, the fantasy time-travel adventure game Chrono Trigger was released to widespread critical acclaim. The music from the game was a big part of its success, even though it came from the simple sound chip of a Super Nintendo Entertainment System.

Armcannon, a progressive metal band that performs TV and video-game music covers, brings the music of those old games to life when it performs them live. Daniel Behrens, one of Armcannon's guitarists, says the musicians who perform at MAGFest have a high degree of skill, because it's a challenge to take a song that was designed to be computerized and arrange it into a version that mere humans can perform.

"There are virtuoso people everywhere you look," Behrens says. "And that is one of the things that really made me fall in love with MAGFest and the video-game music scene."

Behrens says classic game music is composed of catchy melodies, rather than the kind of atmospheric pieces one might hear in an orchestra.

Amanda Lepre, who plays guitar for the band Descendants of Erdrick, says those unique 8-bit tunes had melodies that are memorable years later. There's no better example than the theme from Super Mario Bros.

"Just because it was in one of the most popular games of all time, that's not the only reason why people remember the song," Lepre says. "It's a catchy song. It's got a good melody."

Many bands at MAGFest play video-game covers, but the group that generated the most excitement was Earthbound Papas, a band made up of video-game composers.

Hailing from Japan, the best-known member of the band is its leader and keyboardist, Nobuo Uematsu. He composed most of the soundtracks from the Final Fantasy series, one of the best-selling game franchises of all time. Like other musicians at MAGFest, Uematsu says a talent for melody is at the core of great video-game music.

"It's pretty easy for me to come up with the melodies," Uematsu says. "It's in my head all the time, and I struggle to pick which ones to use."

Even though his music has been performed in concert halls by orchestras around the world, Uematsu says he still loves to perform at rock festivals like MAGFest. He explains that video-game music fans have a special connection with one another.

"Perhaps video games are minor things still," he says. "Because of that, there's a strong bond within the community."

If attendance at MAGFest is any indication, that community is growing. Last year, more than 3,000 fans came to the festival. This year, attendance nearly doubled.