Accessibility links
4,258 Miles Of Meat: Chef, Dad On A Quest For BBQ Chef Molly Baz was working at a Michelin-starred restaurant when she decided to give that up to go on a road trip through barbecue country. She and her father set out to learn everything they could about variations in classic American barbecue. They came back with a couple of favorites — and in serious need of raw vegetables.

Until this fall, chef Molly Baz was working at an upscale Michelin-starred restaurant in New York City. But she decided to give that up to go on a road trip.

Molly wanted to learn everything she could about variations in American barbecue, so she planned a tour of the country's most renowned barbecue regions and invited her father, photographer Doug Baz, along for the ride. The pair documented their travels on their blog, Adventures in BBQ. 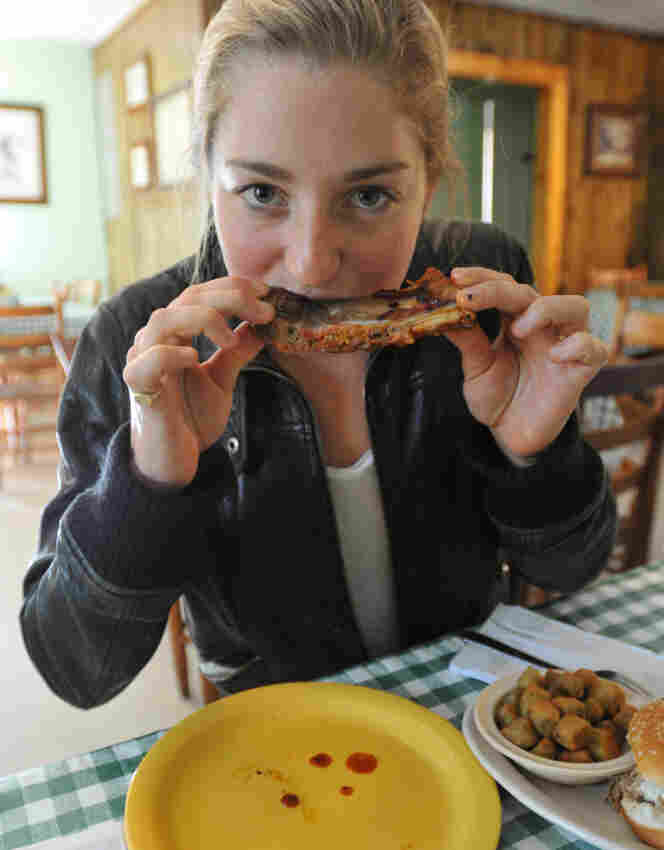 Before setting off on her road trip, Molly Baz worked in the kitchen of Manhattan's Picholine restaurant. She says one of the things she'll miss most from her trip is the Southern hospitality — and the free snacks that came with it. Douglas Baz hide caption 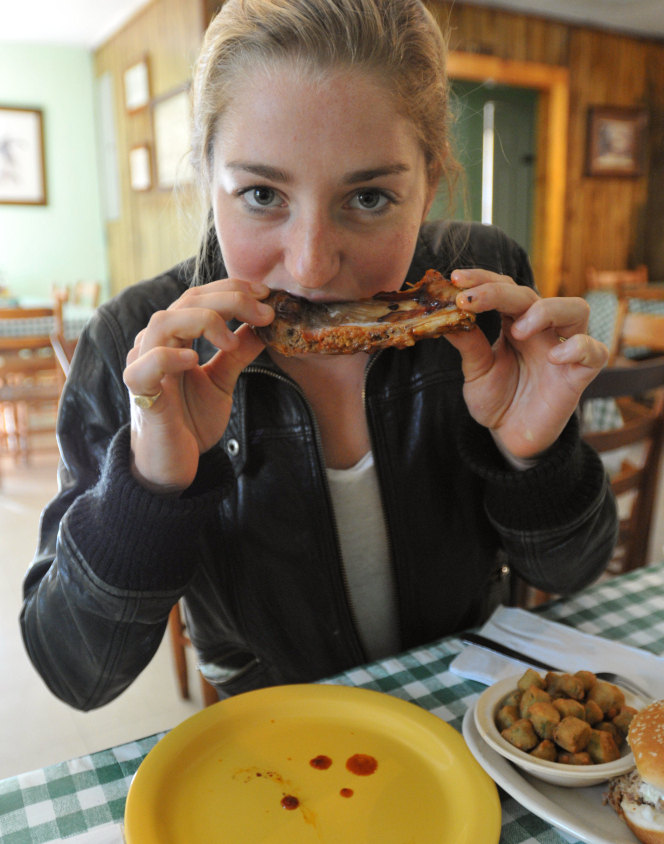 Before setting off on her road trip, Molly Baz worked in the kitchen of Manhattan's Picholine restaurant. She says one of the things she'll miss most from her trip is the Southern hospitality — and the free snacks that came with it.

Molly tells NPR's Audie Cornish that her love of pork is what inspired her to take the road trip.

"I've always been, I guess you could say, ferociously obsessed with pork," she says. "I find the pig to be an incredible animal in terms of its versatility in the cooking world — and that's the world that I live in."

Doug shares his daughter's love of pork, and while he was never intensely interested in barbecue, he tells Cornish that he didn't hesitate when Molly invited him to come along.

"When your 23-year-old chef daughter asks you to go on a road trip with her, I think it took me maybe three or four seconds to answer, 'Yes, I'm there,' " he says.

Learning From The Pit Masters

What Molly and Doug had in mind wasn't your regular foodie tour. They wanted to learn the art of Southern barbecue from the tradition's venerable — and often overlooked — pit masters.

"A pit master is the man who tends the fire, generally speaking, in the back of the barbecue shack," Molly says. "He will be there from 2 in the morning until 2 in the afternoon shoveling coals into a fire and tending to whole hogs and pork shoulders."

Molly learned how to work the pits from the likes of Keith Allen, owner and pit master of Allen and Son BBQ in Chapel Hill, N.C. The walls of Allen's barbecue pit have been darkened by years and years of smoke, but those years have translated into barbecue mastery for Allen.

"I think the only light in that room was the light of the fire itself," Doug says. "[Allen] would open the exterior doors in order to control the draft, in order to pull a lot of smoke out of the room or to allow it to collect. It's a very smoky environment."

Molly and Doug set off on their trip on Oct. 30. Thirty-one barbecue joints later, they don't hesitate when you ask where they had their favorite meals.

"I think that we pretty much hit the jackpot in Texas," Molly says. "Truly, Texas blew our minds. I've never tasted a more delicious piece of unadulterated meat in my life."

Molly says part of what makes Texas barbecue so different is the meat. Where North and South Carolina traditions are pork-centric, Texas is all about the beef: beef brisket, beef sausage, and massive beef ribs.

"The first stop that we made in Lockhart — the barbecue capital of Texas — was at a place called Smitty's," Molly recalls. "We ordered one sausage known as a 'hot ring' and bit into the sausage, which was so juicy inside that as soon as you bit into it, it literally popped and fat and juices from the meats were actually dripping down my arm. And it was so bursting with flavor and with moisture; I've never tasted a sausage like this before."

From Austin to Memphis to Atlanta, the pair covered a good amount of ground, but they also missed some pretty essential stops, like Memphis' Rendezvous — an Audie Cornish favorite — and Kansas City, Mo.

"We do plan on picking this trip up where we left off and hitting up all the spots that we weren't able to make it to," Molly adds. "So, fear not, Kansas City is in the near future."