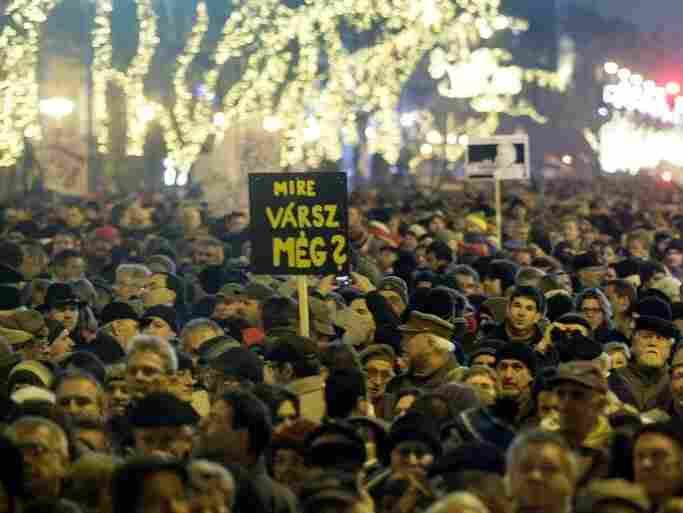 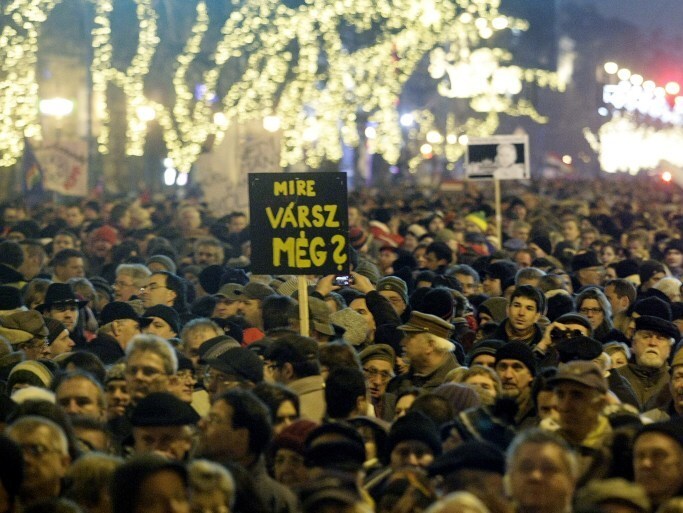 People gather to protest against Hungary's new constitution outside the Opera House in Budapest on Jan. 2. Critics say the document curbs democracy.

Many here fear that Orban, a dissident during the communist era, and his conservative Fidesz party are pushing the country backward.

They are "limiting the media, limiting the judiciary, limiting the scope of the constitutional court," says Bolgar, whose left-leaning station has more than 200,000 listeners. "It's limiting democracy. We are not yet [Vladimir] Putin's Russia, we are not a dictatorship. But we are on a road that is clearly leading us toward some kind of dictatorship or autocracy."

Bolgar and the rest of the privately owned Klubradio may soon go silent. One of the only remaining independent broadcast news outlets in Hungary recently lost out to an all-music station when the license came up for renewal. The members of the media authority that made the decision are all Orban loyalists.

The newly established media authorities and the government deny there was political meddling in the license decision.

And EU Commission President José Manuel Barroso, speaking Wednesday in the EU Parliament in Strasbourg, France, says the body will "not hesitate to take further steps" depending on the formal replies from Hungary.

"We want Hungary to go on being a respected member of the European Union," Barroso says. "This should not be a debate against Hungary but for Hungary and with Hungary. We are asking the Hungarian authorities to correct points that raise concerns. We do not want a shadow of doubt on the democracy on any of our member states."

In response, Orban told the EU parliament members that "the problems that had been raised by the Commission could easily be resolved. They could swiftly be resolved and remedied."

"We are not selling any kind of secret, or doing tricks," Hungarian government spokesman Zoltan Kovacs says. "We are just using the mandate we were given."

Kovacs says he's confident the new constitution and other changes will stand up to EU scrutiny. He says the government is fully cooperating and will examine all the issues the EU has raised in its "infringement procedure."

Kovacs adds that Fidesz, which has a solid two-thirds majority in parliament, is simply fulfilling an election pledge to reform Hungary after decades of failed communist rule and, more recently, eight years of what he calls corrupt socialist rule.

"We are going to have a completely new setup," he says. "We are rebooting the system, so this is a major system update. And we are completely confident that this new constitution is coming up to all European and world standards."

But Benedek Javor, a member of Parliament from the Green-affiliated Politics Can Be Different party, says voters were never told during the campaign that a "reboot" would mean draconian restrictions and changes to basic structures of democracy.

"This can't be a mandate from the people. They didn't know Fidesz was going to give a new constitution, to introduce a flat tax, to cut social care system, or limit the rights of the Constitutional Court," Javor says. "All these things were not even mentioned before the elections."

Mark Palmer, a former U.S. ambassador to Hungary, worries that Hungary is backsliding toward one-party rule. Alarmed by the erosion of an independent media, Palmer has asked the U.S. to consider restarting Radio Free Europe's Hungarian service. He says it is no longer unthinkable that Hungary could be kicked out of the EU.

"I believe that is a real prospect," Palmer says. "The single greatest achievement of the European Union in the field of democracy was, of course, to bring these countries that had been dictatorships into the democratic world. But that process is not unidirectional. If a country abandons its democratic principles and practices, it will be expelled. The same is true with NATO membership."

There have been some street protests. The largest was Jan. 2 in Budapest. Palmer says he hopes more Hungarians speak out. "I think eventually the Hungarian people will not tolerate this. And it's not too late; Orban can pull back," he says. "But he's not going to do it voluntarily. You have to have pressure to bring about course corrections."

Budapest has until mid-February to respond to the EU's concerns. If Hungary ignores the requests to change the constitution, the European Commission can send a case to the European Court of Justice and impose fines. But the EU has another way to pressure Hungary: The EU and the International Monetary Fund are withholding a 20 billion euro ($25 billion) loan — financial aid Hungary desperately needs to remain solvent.