Accessibility links
Q&A: Congress, SOPA, PIPA And The Fight Over Online Piracy In Congress The House of Representatives has backed away from a strong anti-piracy bill known as SOPA, but the battle isn't over. Next week, the Senate takes up the controversial legislation. Here, we answer basic questions about the bill, and where things may be headed.

Q&A: Congress, SOPA And A Fight Over The Web

Q&A: Congress, SOPA And A Fight Over The Web 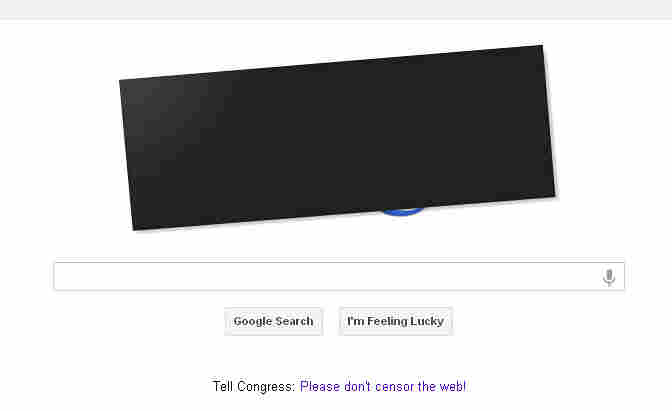 Google's main search page featured a black bar over the company's logo Wednesday, along with a link to a page describing its stance on the issue. NPR hide caption 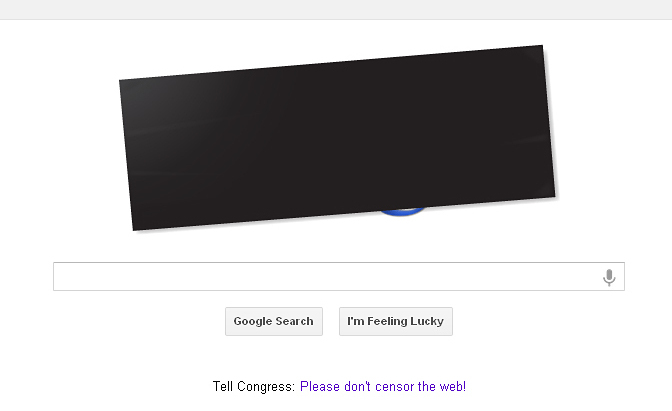 Google's main search page featured a black bar over the company's logo Wednesday, along with a link to a page describing its stance on the issue.

The House of Representatives has backed away from a strong anti-piracy bill known as SOPA, but the battle between copyright holders and free speech advocates isn't over: The Senate will take up its version of the controversial legislation next week.

SOPA, along with the Senate's bill called PIPA, seeks to blacklist websites that facilitate online piracy. The legislation touches on topics that roil passions in America's culture: copyright laws, free speech and the Internet.

Below, we answer some basic questions about the issue, and where things may be headed.

What's Next For SOPA And PIPA?

Many observers think Congress had been building momentum to adopt the legislation, before mounting protests and concerns caused members of the House and Senate to take a new look at the bills. It now seems likely that at least one, and possibly both, of the bills will be altered to take the concerns of free-speech advocates and Web companies into account.

House Speaker John Boehner of Ohio said as much Wednesday, when he stated, "It's pretty clear to many of us that there's a lack of consensus at this point. I would expect that the committee would continue to work to try to build a consensus before this bill moves."

The Senate is slated to hold a cloture vote on its version of the legislation next week, on Jan. 24. But the bill is losing steam as that date nears. NPR's David Welna reports that "nearly half the Senate bill's 40 sponsors are Republicans, but many of them have withdrawn their support in the past few days."

Sen. Ron Wyden, D-Ore., who has placed a hold on the PIPA bill, tells Welna that the bills' backers intended all along to get approval in the Senate first, and then settle on a compromise version with the House.

What Would SOPA And PIPA Actually Do?

The bills target websites that use the Internet for two things: helping people transfer copyrighted content or selling counterfeit goods.

Once an offending site is identified, the bills target all the pieces of an ecosystem many websites need to survive. Companies from Internet service providers and advertising services to payment networks like PayPal would be forbidden from doing business with the site. The bills would also force search engines to not link to sites deemed to contain pirated content.

The SOPA bill contains a clause promising, "Nothing in this Act shall be construed to impose a prior restraint on free speech or the press protected under the 1st Amendment to the Constitution."

But that hasn't placated critics, who are alarmed by what they call the bills' aggressive measures and ambiguous language. Both bills are meant to target foreign entities — but they also state that any site "facilitating" violations of the law is punishable.

Where Did The Bills Come From?

SOPA (Stop Online Piracy Act) was introduced by Rep. Lamar Smith, R-Texas, who chairs the House Judiciary Committee, along with a bipartisan group of 12 co-sponsors.

PIPA (Protect Intellectual Property Act) was introduced by Senate Judiciary Committee Chairman Sen. Patrick Leahy, D-Vt., along with 11 co-sponsors from both parties. After their introduction, both bills gained more supporters — until protests against them became more public in December.

Essentially, large media groups support the proposed bills — corporations such as Time Warner and News Corp., and industry groups that include the Motion Picture Association of America, the Recording Industry Association of America, and the U.S. Chamber of Commerce. They say they're losing billions of dollars each year to counterfeiting and file-sharing enterprises based overseas.

These industry groups say that the anti-piracy bills aren't aimed at domestic U.S.-based sites, but instead at "foreign infringing sites," as the SOPA bill calls them, which cater to American users for the sole purpose of getting around U.S. copyright laws.

The bills' supporters say they want to give content owners a way to enforce copyrights against sites that aren't covered by the Digital Millennium Copyright Act, which targets U.S.-based sites.

On the other side of the issue are Internet giants like Google, Twitter, Wikipedia and Facebook. Those companies don't create much content on their own. Instead, they often help their users find or share text and images, music and video. And they don't want to be held responsible for millions of users' actions.

And because the new bills impose harsher penalties than the DMCA — and also because many U.S.-based Internet and social media companies have large international presences — those companies are worried that regulators and courts could use the proposed law to force them to change how they work, at a very basic level.

To many people, the discussion boils down to copyright vs. free speech. That means you have some civil liberties groups on the same side as dedicated pirating sites, such as The Pirate Bay. And on the other side of the fence, you have media companies complaining that their content is being reproduced without compensation.

An effort to move SOPA out of the House Judiciary Committee prompted Wikipedia and other websites to "go dark" Wednesday, as a protest against the bill. Other sites, such as Google, remained operational but blacked out part of their logos and posted statements against the legislation — along with links to contact their elected representative.

The issue has splintered the two main parties in Congress, with Republicans and Democrats crossing the aisle to band together with like-minded legislators. Some co-sponsors of the bill have abandoned it, after hearing from their constituents.

As of Thursday morning, PIPA had 38 supporters and 19 opponents in the Senate. And SOPA had 27 supporters and 83 opponents. You can follow who in Congress supports or opposes PIPA and SOPA at the ProPublica site.