Accessibility links
In Malaysia, Student Challenges Limits On Politics In the modern history of Asia, college students have often played a leading role in pushing for political reform. But in Malaysia, a 40-year-old law bans the country's college students from participating in politics. Adam Adli, 22, is leading a high-profile battle to abolish the law. 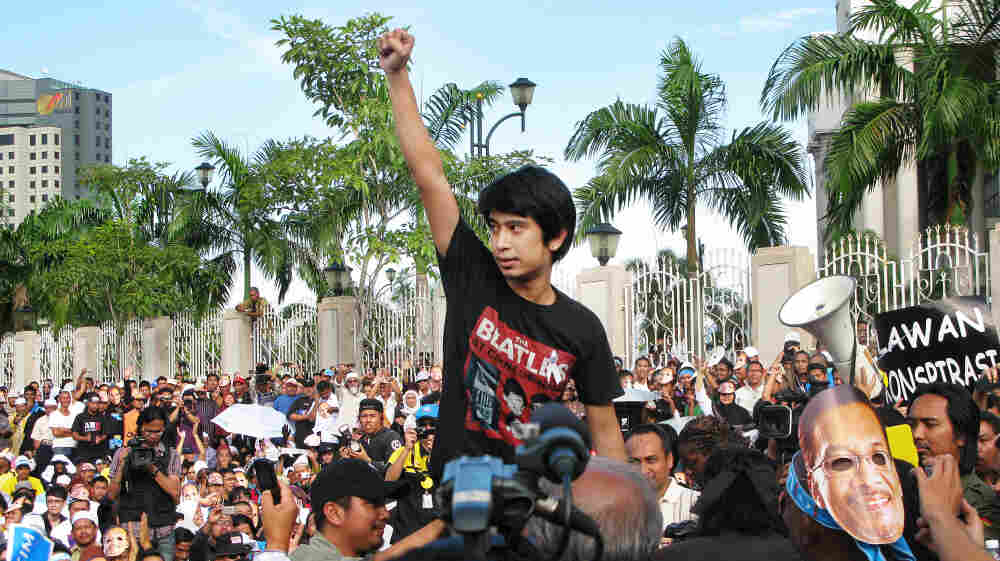 Student activist Adam Adli addresses protesters outside Malaysia's high court in Kuala Lumpur on Jan. 9. The crowd was awaiting a verdict in the trial of opposition leader Anwar Ibrahim, who was acquitted on charges of sodomy shortly afterward. Adam is leading the fight to abolish a decades-old law that bans college students from joining or speaking in support of political parties. Anthony Kuhn/NPR hide caption

In Asia's modern history, college students have played a leading role in pushing for political reform and challenging authoritarian regimes.

Adam Adli is one of these student activists, and is becoming a prominent political figure as he fights to abolish a 40-year-old law that bars college students in the prosperous Southeast Asian country from participating in politics.

They centralize everything. They even centralize how you think, how you learn. So the graduates will become people with no passion, with no interest in social and political issues.

The 22-year-old was among the crowd of thousands chanting "reformasi," or reform, outside Malaysia's high court in the capital, Kuala Lumpur, on Jan. 9.

They were awaiting the verdict in the high-profile trial of former deputy prime minister and opposition leader Anwar Ibrahim. The government had charged him with sodomy, a crime in the Muslim-majority country. In the view of his supporters, it was an attempt to end his political career.

"Students, sons of fishermen and farmers, rise up!" shouted Adam, a mop-haired college student in a Beatles T-shirt.

Just as Adam spoke, news came that Anwar had unexpectedly been acquitted of the charges. The crowd erupted in celebration.

Adam has grabbed headlines by leading the movement against the University and University Colleges Act, which bans students from joining or even speaking in support of political parties.

Adam slams the act as an attempt to stifle free speech and impose conformity on students.

"[The education authorities] centralize everything. They even centralize how you think, how you learn," he says. "So the graduates will become people with no passion, with no interest in social and political issues."

The controversial universities act was born out of Malaysia's race riots of 1969, in which majority ethnic Malays clashed with minority Chinese. This led to a state of emergency that has not been lifted to this day.

Student protests followed, led by Anwar Ibrahim, who was then a student firebrand. The protests shook the government, which responded by drafting the universities act in 1971. 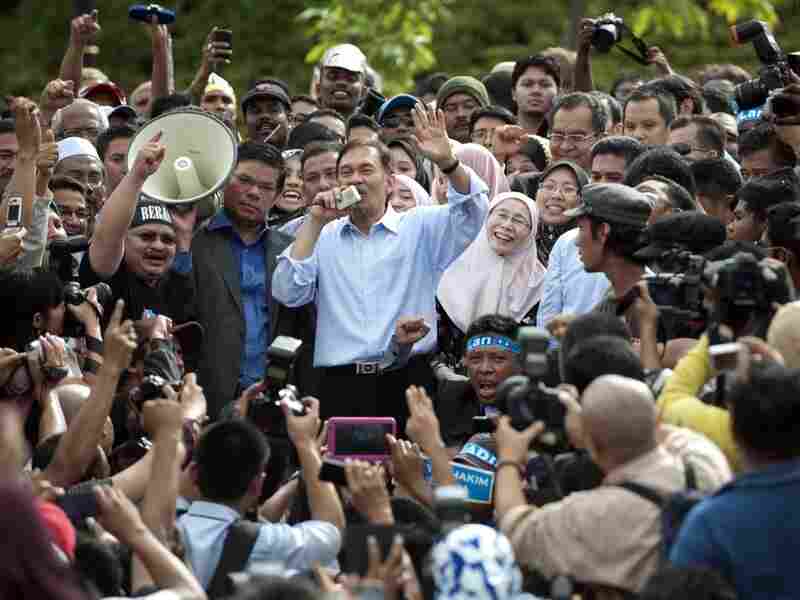 Malaysian opposition leader Anwar Ibrahim (center), accompanied by his wife, Wan Azizah (center right), speaks to his supporters in Kuala Lumpur on Jan. 9 after his acquittal. Anwar is a former student activist — and many say Adam is feared by the government as much as Anwar was. Saeed Khan/AFP/Getty Images hide caption 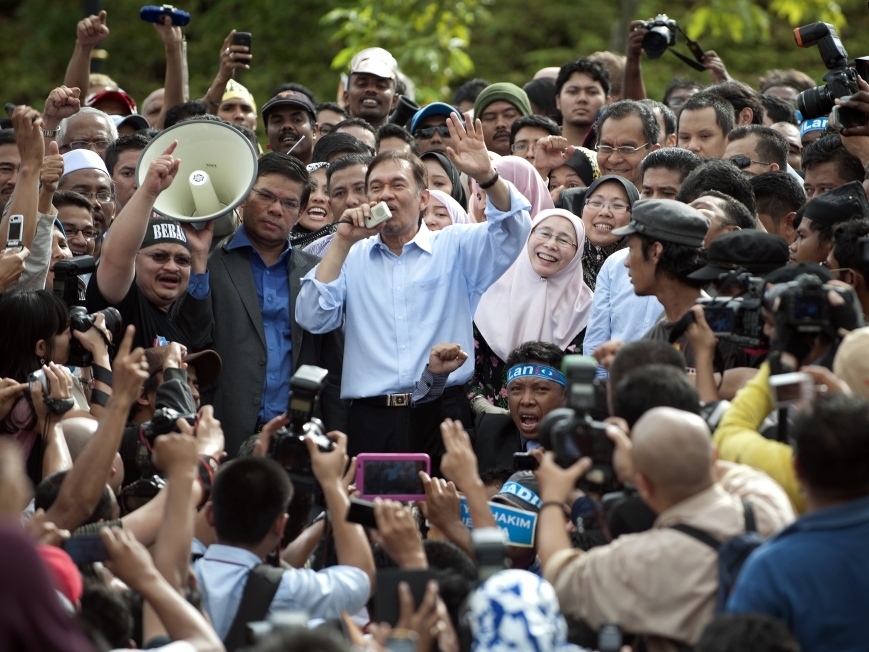 Malaysian opposition leader Anwar Ibrahim (center), accompanied by his wife, Wan Azizah (center right), speaks to his supporters in Kuala Lumpur on Jan. 9 after his acquittal. Anwar is a former student activist — and many say Adam is feared by the government as much as Anwar was.

The education minister at the time, Mahathir Mohammed, later became prime minister, and he recruited Anwar to be his deputy. But Anwar's attacks on corruption within the ruling party angered Mahathir, who sacked him.

Anwar was later sentenced to 15 years in jail on sodomy and corruption charges that were widely seen as politically motivated. The high court overturned the first convictions in 2004. Anwar was then charged with sodomy again — and it was that charge that was resolved with Anwar's acquittal earlier this year.

Democracy has been growing slowly in Malaysia, a multiethnic country of 28 million, made up of roughly 54 percent ethnic Malays, 24 percent ethnic Chinese and 7 percent ethnic Indians. It's a country where the ruling party has dominated the government since independence from British colonial rule in 1957.

And in recent history, the authoritarian Mahathir emphasized economic development while keeping a tight grip on political change.

Terrence Gomez, a political economist at the University of Malaya in Kuala Lumpur, says the government fears Adam Adli now, much as it feared Anwar Ibrahim four decades ago.

The case is "the spark that has ignited a fire, and the government is extremely worried that this movement is going to spread and become a mass movement that can overthrow this government," he says.

Gomez says the current government has failed to deliver on its promise of democratic reforms. Recent protests against laws that limit civil liberties, such as the Internal Security Act of 1960, have produced what critics say are mostly cosmetic changes.

He also argues that the universities act has hurt Malaysian higher education — by not allowing students to freely debate matters vital to the nation's future or think outside the box of politically correct thought. And this, he says, has sent disaffected youth flocking to the opposition, led by Anwar, who has pledged to oust the current government in elections expected this year.

'The Struggle Is Not Mine Alone'

As does Adam Adli: Hours after the high court acquitted Anwar, university authorities suspended the student activist for three semesters. His offense? Pulling down a picture of Prime Minister Najib Razak during a protest march in December. The authorities declined to be interviewed for this story.

After the hearing that decided his punishment, Adam emerged from the school's gates to find fellow students hemmed in by police with shields and truncheons.

"The struggle is not mine alone," he told his classmates. "We're all in this together."

Law student Abdullah Aziz agrees. He says that Adam and other students are paying a high price just for exercising their legal rights.

"The ruling party labeled us as the opposition. We don't want that kind of label," he says. "We are not opposition. We are not paid by any political party to be in politics. We are students, we have our own idealism. And that is what we are fighting for."

Visibly shaken by his punishment, Adam is still defiant.

"I will fight in the court. This is so unconstitutional," he said. "Where's the students' rights, the human rights in here? They say I give a bad image to the university, and also brought chaos to the country."

In a quiet moment before a hearing on his suspension, though, Adam confides that he's already gotten offers from other universities willing to take him in if he's expelled.

He says he's content to be a student activist, and shudders at the idea of a career in the stuffy, stodgy arena of elite politics.

"It's so not for young people like me," Adam says. "You see, I'd rather be Che Guevara than Fidel Castro."