Accessibility links
Cheap Chinese Panels Spark Solar Power Trade War U.S.-based solar panel manufacturers say inexpensive panels from China are hurting their business and want a tariff slapped on the imports. But other parts of the industry, such as installers, say the cheaper panels are driving a solar power boom in the U.S. 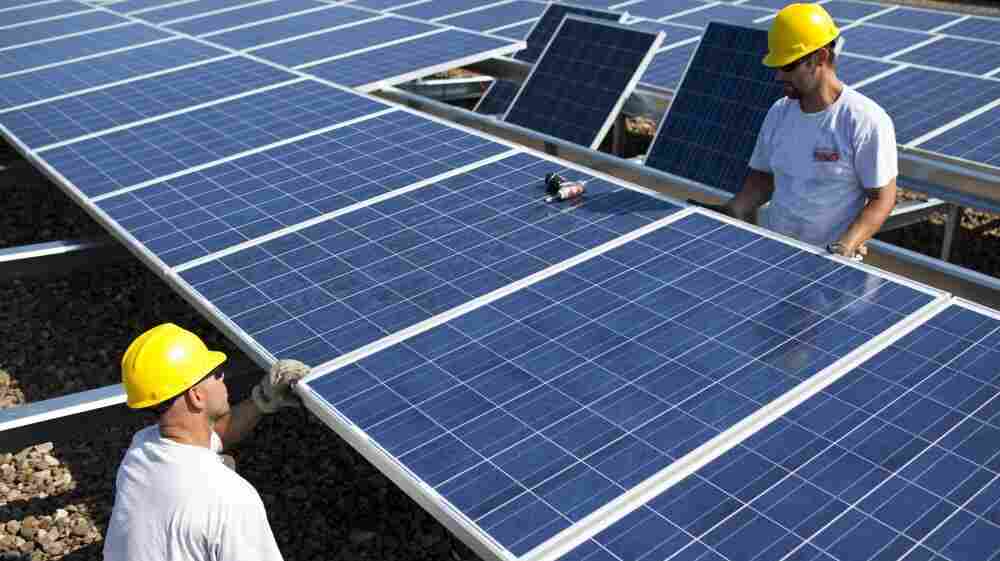 Contractors with SunEdison install more than 1,000 Chinese-made solar panels on top of a Kohl's Department Store in Hamilton Township, N.J., in 2010. Energy generated by the solar system will cut the store's usage, on average, by 25 to 30 percent. Robert Nickelsberg/Getty Images hide caption

There's a solar trade war going on inside the U.S., sparked by an invasion of inexpensive imports from China.

The U.S. solar industry is divided over these imports: Panel-makers say their business is suffering and want a tariff slapped on the imports. But other parts of the industry say these cheap panels are driving a solar boom in the U.S.

On the manufacturers' side, there's Gordon Brinser. He's an Oregon native who says the company he runs there, SolarWorld, is not only green, it's red, white and blue. "The mission that we have is to build products here in America, for America's community, for America's energy independence, and really leave the world a better place," he says.

Brinser claims China is threatening that vision by flooding the U.S. with cheap solar panels. He claims China subsidizes its solar panel industry to the tune of $30 billion a year, yet uses only a small percentage of the panels it makes. "So obviously," he says, "these subsidies have gone into the industry, and their full intention is to export and control markets in other countries."

Brinser claims the imports contributed to the collapse of some U.S. manufacturers. Three did go out of business in 2010, though the exact cause may or may not be cheap imports. But Brinser has petitioned the U.S. Department of Commerce and the International Trade Commission to slap tariffs on imported Chinese panels.

So far the feds say, yes, American panel-makers have been harmed by Chinese imports. Yet to be determined is whether China is doing anything illegal: for instance, subsidizing panel-makers so they can sell below cost, a practice called "dumping."

Brinser acknowledges that if he wins and tariffs are added, Americans will have to pay more for panels. "The prices will have to increase, you know, a little. They will find their new, natural balance in a competitive and legal environment," he says.

Kevin Lapidus works for CASE and is vice president of SunEdison, which builds and operates solar power systems.

More About Solar Power In The U.S.

"Fully 52 percent of the U.S. jobs are in the installation business," he says. "These are U.S. workers who wake up in the morning, put on a tool belt, and they go and build something." He says manufacturers of solar panels in the U.S. are only about a quarter of the domestic business.

Lapidus says solar power is just now shaking off its reputation as too pricey for regular people. "We're finally reducing the price of solar," he says. "We're driving down the cost to grow the solar base — installations, jobs, etc. And the SolarWorld trade case will increase the cost of electricity; it will set the industry back by years."

He says it could also start an international trade war with China. American solar industries export well over a billion dollars of products to China per year.

At Solar Energy Services in Millersville, Md., a single stack of solar panels sits on the floor of a warehouse. Engineer Rick Peters says he got them cheap because the manufacturer folded — they couldn't compete. He's run out of Chinese panels for the moment. "Probably about 70 percent of what we install is Chinese panels," he says.

Peters points out that some homeowners like to buy American, but most, about 90 percent of his customers, just want the best price. And Chinese panels are about 10 percent cheaper.

A tariff could double their price, and Peters says that could push everyone's prices up.

"I'm very concerned about that," he says. "I think that it could significantly increase the price, because of the limited number of manufacturers in the U.S. Potentially, they could take advantage of the marketplace."

By raising their prices as well? "Absolutely," says Peters.

He fears that could have ripple effects for other U.S. manufacturers. He illustrates by cutting open a big cardboard box on the floor of the warehouse. Inside is an inverter, a device that every solar installation needs to convert direct current to the alternating current in your home. It costs about $4,500.

"This one is made by PV Powered," he says, "which is a U.S. manufacturer. A lot of the inverters are manufactured in the U.S." Fewer installations would mean fewer inverters sold.

Over the next several months, the federal government will decide whether China is playing fair or not.