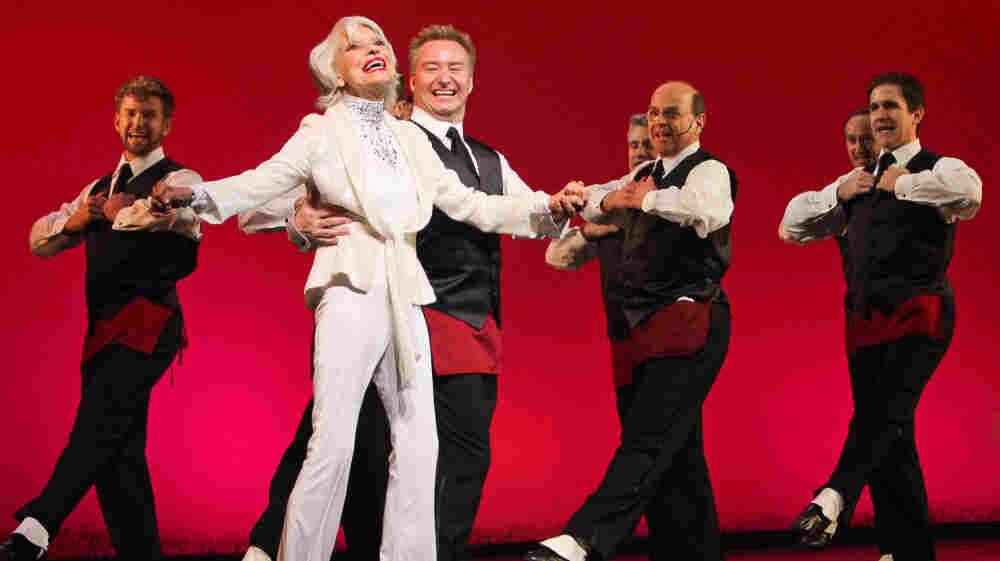 Carol Channing — who turns 91 on Jan. 31 — appears in the 2010 Gypsy of the Year celebration, an annual salute to Broadway's hardest-working chorus performers. Peter James Zielinski/Entertainment One hide caption

Whenever the late New York Times caricaturist Al Hirschfeld sketched Carol Channing — whether picturing her as an indomitable Dolly Levi, swathed in feathers and sequins, or as carbon-crazed Lorelei Lee, eyes sparkling like the diamonds that were that splendid creature's best friends — he always made her appear a creature composed entirely of lipstick, mascara and hairspray.

It says something about both his artistry and hers that Channing has generally come across that way in real life as well — seven decades of Broadway celebrity, lived less as a flesh-and-blood figure than as a fabulously insubstantial cartoon.

Tall, slender, saucer-eyed, toothy, with a vocal rasp that suggests sandpaper being fed through a shredder, she's the one stage star who has never had any trouble living up to her Hirschfeld. That's her talent — and also what's made her a campy fave with female impersonators.

There's nothing here to surprise the Broadway devotees who will be this film's prime (and possibly only) audience; the nonogenarian Channing that Berinstein puts gently on display is definitely performing Carol Channing for the camera. But she sounds sharp and reasonably canny about the impression she's making.

With photos that show a comparatively delicate-featured young woman morphing into the gaudy starlet who first took Broadway by storm in the revue Lend An Ear, the film traces Channing's career, mixing archival footage of stage triumphs with more personal tribulations.

The latter include a miserable 42-year marriage, a first screen kiss with Clint Eastwood (alas, cut from the film The First Traveling Saleslady), and a happy reunion after seven decades with childhood sweetheart Harry Kullijian.

Channing and Kullijian (who died after filming was completed) bill and coo like teenagers through a few too many reminiscences of adolescence, but their affection, and their stories, do offer a window on the woman behind the performance.

A Bennington College grad before she made her rep as Broadway's most ebullient trouper, she's hardly the dumb blond she has been playing since her 30s. If you doubt her skill at media manipulation, just watch her in the vintage TV clips Berinstein has dug up, disarming interlocutors — she all but disables a helplessly cackling Gene Shalit — as she launches into showbiz anecdotes replete with accents, impersonations and deftly delivered shtick.

That they're all practiced routines, with punch lines she knows precisely how to land, doesn't reduce their effectiveness a whit. The lady was — and remains — a pro, still glowin', crowin', goin' strong.