Accessibility links
'Red Tails' Screenwriter John Ridley On The Tuskegee Airmen George Lucas is out with a new action-adventure about the real-life heroics of the African-American fighter pilots known as the Tuskegee Airmen. They were charged with escorting bomber planes to their targets during World War II. Red Tails screenwriter John Ridley talks to Renee Montagne about the movie. 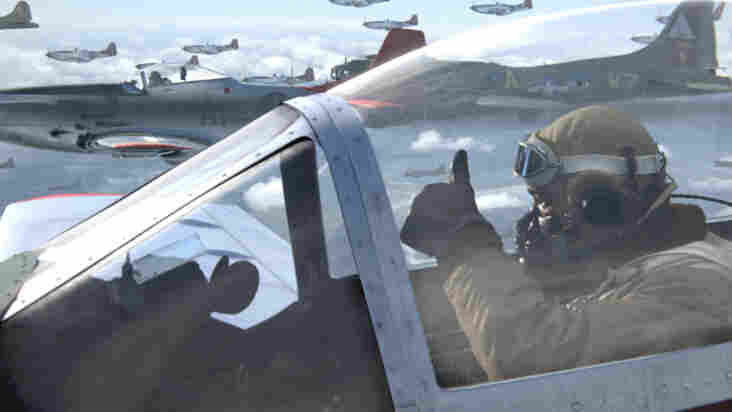 Escorting a squadron of bombers, Andrew "Smokey" Salem (Ne-Yo) signals fellow pilots on the way into combat with German forces in the new film Red Tails, based on the experiences of the famed Tuskegee Airmen fighter group. LucasFilm hide caption

It took George Lucas more than two decades to bring the movie Red Tails to the screen. It was all the way back in the late '80s that the man behind Star Wars and Indiana Jones fell under the spell of another story of adventure, this one with real-life heroes — the African-American fighter pilots of World War II.

They were known as the Tuskegee Airmen, and they were as dashing, inventive and brave as any of Lucas' big-screen protagonists. But they also carried the burden of the unrelenting racism of their day. In an act of defiance and pride, they painted the tails of their planes red — which is how they became known as the Red-Tail Angels.

John Ridley, a longtime Morning Edition commentator and the writer of the Red Tails screenplay, tells NPR's Renee Montagne that when the Tuskegee Airmen were finally sent to an overseas duty post, they were flying what you might call the jalopies of the U.S. Army Air Forces — planes "plucked from Uncle Sam's junkyard," in the words of one airman in the film.

Once the Red Tails finally saw active combat, Ridley says, their white superiors were astounded by the levels of skill and discipline the Airmen displayed — especially when compared with pilots in all-white units.

"They weren't innately better, but [the Red Tails] had trained so much longer because no one wanted to assign them [to combat]," says Ridley. "When they got the opportunity, they were among the most trained pilots in the air."

Having proven themselves, the Airmen were quickly upgraded from their junkers to fly state-of-the-art P-51 Mustang fighters — and they were assigned to more challenging missions, including escorting heavy B-17 bomber planes to their targets.

Up to then, the bombing squadrons had regularly taken heavy losses.

"The large planes would have 10 to 11 men onboard, and there were bomber trains of maybe 100 B-17s," Ridley says. "You're talking about a thousand men in the air, and at the time they were losing 20, 30 or 40 of these [planes] per mission. You can imagine what that was doing to the psyche on the homefront."

Part of the reason so many planes were shot down was the escorts' tactics. U.S. pilots were trained to pursue German fighters, leaving the bombers open to attack.

In the movie, as in real life, the Red Tails do things differently. In the film, Col. A.J. Bullard (Terrence Howard) warns his men not to chase glory by going after the German planes.

"We count our victories," he tells them, "by the bombers we get to our targets, by the husbands we return to their wives, by the fathers we get back to their children."

That speech could be a pep talk from an officer to his men in just about any war film. But in this case, it's a black officer challenging his men to protect white pilots — many of whom were disdainful of their shepherds.

Ridley says the Red Tails' approach made a dramatic difference.

"It was huge. It was a different way of fighting, and it changed the course of the war." 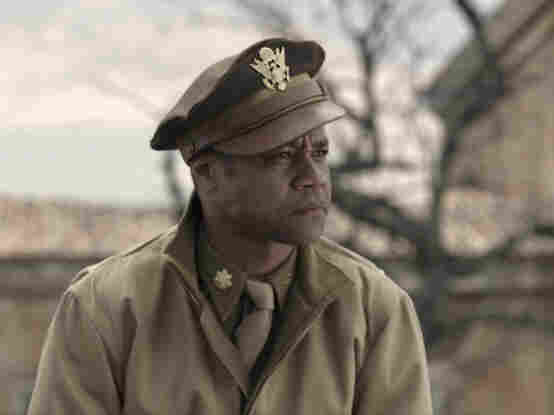 'They Were All Real Characters'

Except for the color of their skin, the bomber-jacketed heroes of Red Tails could have stepped out of a John Wayne war movie: the pipe-smoking major, the hot-headed troublemaker. Ridley says their personalities aren't particularly exaggerated.

"When I had the opportunity to sit down and talk with these Tuskegee Airmen — and this was obviously 60 years on from the war — these guys were all, despite the fact that they were in their 70s, their 80s — they were all real characters," he says.

Ridley thinks their swagger had its roots in their need to prove themselves on not one but two fronts.

Whatever it was, they still had it, even in old age.

"When you sit with them, they're the same characters," Ridley says. "If a guy was chewing tobacco back in the day, he's chewing tobacco now. If he was full of braggadocio back in the day, he had it now. And that's what we want to do with these characters — not just make them these stoic, quiet black men who were trying to fight for the right to fight. These guys were exciting."

'Daddy, I Have A Really Great Idea'

That visceral excitement was key, too, in making a movie whose historical resonance needed to blend with a George Lucas aesthetic — it needed to be an old-fashioned adventure story that a 12-year-old would love. Ridley says it helped that his own son quickly became interested in the project.

"When I started writing this, my son was 7, and when I got the material for Red Tails, some of it was on DVD — old war films and things like that," he says. "And my son ... would get interested. ... And I said, 'If you wanna watch these old war films, do it.' ... And when he came back to me, he said, 'Oh Daddy, I have a really great idea for how the movie should end.' And I don't want to spoil anything, [but] my son actually came up with what should actually be the end of the film.

"One of the things I really enjoy about this film is to be able to, in the slightest way, to do something with my son. It was the greatest moment in my life going to the premiere with my son — being able to point to the screen and go, 'This is something you helped your dad do.' "