Accessibility links
Duke Fakir Of The Four Tops Plays Not My Job Duke Fakir was still a high school student in Detroit when he started performing songs with three friends in the 1950s. That was the beginning of the 40-year career of the Four Tops, one of Motown's biggest acts. We've invited Duke to answer questions about three different kinds of bottoms. 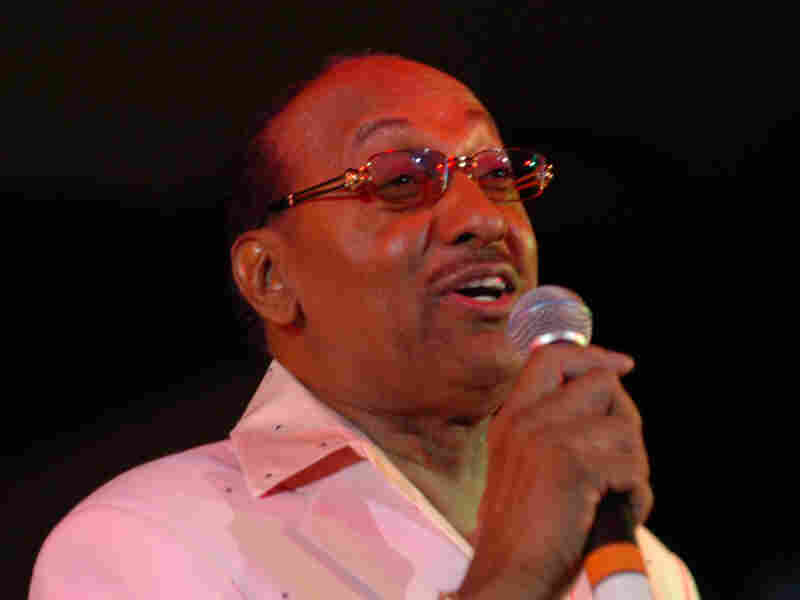 Duke Fakir was still a high school student in Detroit when he started performing songs with three friends in the 1950s. That was the beginning of the 40-year career of the Four Tops, one of Motown's biggest acts, known for such hits as "Reach Out I'll Be There," "Baby I Need Your Loving," "Bernadette" and many more.

We've invited Duke, as one member of the Four Tops, to answer three questions about different kinds of bottoms.

And now, the game where we reward a lifetime of achievement with about ten minutes of silliness. It's called Not My Job. Duke Fakir was a high school student here in Detroit, back in the 50s, when he started performing with three friends. That was the start of the Four Tops, one of Motown's biggest acts...

SAGAL: ...with their hits "Reach Out I'll Be There," "Baby I Need Your Loving," "Bernadette" and many others. Duke is still singing, still in Detroit. We are delighted to have him here. Duke Fakir, welcome to WAIT WAIT...DON'T TELL ME.

DUKE FAKIR: Thank you so much.

SAGAL: What an honor, an honor to have you.

FAKIR: Thank you, Peter. First of all, it's really a joy to be here.

SAGAL: It is great.

SAGAL: Everybody's having a good time.

FAKIR: You know, you guys are really hilarious.

SAGAL: So let's do like they do in the comic books, the origin story. You were a high school student near here, in Detroit.

FAKIR: Any Doughboys out there?

SAGAL: All right, we got one.

SAGAL: And you started performing with a friend of yours in high school.

SAGAL: And you were like, doing what, after school dances? You were in churches, what?

SAGAL: You and your friend, who was that first person?

SAGAL: You and Levi.

FAKIR: Yeah, we started it, yeah.

SAGAL: And two more from...

FAKIR: Now, we was at Pershing High, Levi and I were very popular because I was an athlete and everybody knew he could sing. But we always liked singing in a group. Now, there was a girl's club called the Shahrazads. They were giving a party, like a dance party. And the criteria to be in this girl's group was that you had to be really "ah", okay?

FAKIR: So they were giving this party.

FAKIR: Now, we didn't really go there to sing.

FAKIR: We went there for the - for what guys go to the parties for, you know.

FAKIR: All right. Well, it just so happened that when we did sing, everybody knew Levi was the lead singer, so...

FAKIR: So in the middle of the party, the little young ladies said, hey, Lee, is this a quartet you got? You guys want to sing? So he said, yeah, yeah. So he said, you all just back me up. So he started singing a song we all knew, and we started backing him up. And our voices blended perfectly well.

SAGAL: I got to say, having heard that story about that party, I think about lyrics like "baby, I need your loving, got to have all your loving," and I take them a lot more literally than I used to.

FAKIR: I wish we knew that song then.

SAGAL: So tell me about - you were there in the heyday of Motown. You went from Chess to Motown.

FAKIR: Yeah, we went from Chess to Columbia and then to Riverside. And all the while, Motown was starting to grow. So Berry Gordy had seen us on "The Tonight Show." We were working out of New York. So he had the A&R director who knows us quite well, to get in touch with us. And at that time, we were thinking about how we were going to get in touch with Berry.

FAKIR: So it really worked out. I mean, we rushed back to Detroit and sat down and made a deal. Whatever deal he offered us, we was going to take anyway...

FAKIR: Because we were just really going to - that's where we should be. And then that was the kind of deal he made. He just promised us hit records.

SAGAL: And he did it.

FAKIR: And he did.

SAGAL: It was pretty crazy there, I'm told, in the heyday.

SAGAL: Everybody was competing to get the next song out.

FAKIR: Once he put us with Holland-Dozier-Holland...

FAKIR: They were great songwriters.

Then they would have the Four Tops in the next. Then next week they'd have Junior Walker. And they wrote these specifically while you're sitting there sometimes, just for you. When you walked out of there, you had a top ten record.

SAGAL: Well, tell me how that happened for you, for example, like a song like "The Same Old Song," one of your hits.

FAKIR: Well, "The Same Old Song" came about after "Sugar Pie, Honey Bunch, Can't Help Myself." "Can't Help Myself" is one of our biggest hits, that and "Reach Out." It had been on the charts, number one for 19 weeks. So when it fell from one to give, Berry Gordy came in the studio and started screaming. "We got an anchor. It's number five with an anchor. We don't have another record to follow."

FAKIR: So I said, look, man, and I was driving, and I said, let me take you home. So I went to his house. He said come on in for a minute and just have a nightcap. I say, okay, baby. So we had a nightcap and we was talking, and as usual, he just went to his piano and he started tinkering around. He was playing "Can't Help Myself."

FAKIR: It's the same song. He say, okay, Duke, I'm fine. I'll see you later. And I went home. The next day they called us to come to the studio, Friday. They had recorded a track called "The Same Old Song," a rhythm by the Front Brothers, who sang the song. They mixed it. Sunday, they called us into the office to stamp label copies. Monday, it was...

SAGAL: You had to go in there and stamp your own labels?

FAKIR: Yeah, why not?

FAKIR: Are you kidding? Yeah. To get it on the air by Monday, yes.

SAGAL: You think Eminem does that? He goes in and stamps his own?

FAKIR: And it was on the air.

FAKIR: It was on the air Monday and we had a hit by Tuesday.

SAGAL: So "The Same Old Song" is actually the same old song. Who knew?

SALIE: So, Duke, you have a lot of swoon-worthy songs, right? So when you were dating, when you did want to court somebody, what was your go-to song that you would sing to her?

FAKIR: "Baby, I Need Your Loving," what else?

ROCCA: But wait a minute, you'd need the other three Tops to come with you on the date to make it work.

FAKIR: That's the only time I could do a solo.

SAGAL: Well what a pleasure to talk to you. But...

SAGAL: Duke, we have asked you here to play a game that today we are calling?

You are one of the Four Tops. Now, it's time for three bottoms.

SAGAL: It seems to make sense. We got three questions for you about different kinds of bottoms.

SAGAL: Answer two of them...

FAKIR: I can answer all of those.

SAGAL: But we have three questions for you about bottoms. Carl, who is Duke Fakir playing for?

KASELL: Duke is playing for Ronald Bazman of Brighton, Michigan.

SAGAL: All right, you ready to do this?

SAGAL: Here's your first question. The Bottom is the name of the capital of the tiny island of Saba, in the Caribbean Netherlands. The Sabans also demonstrated their genius for naming things. How?

SAGAL: One of those things is true.

SAGAL: The only road in the island of Saba is called The Road. It was built by a guy who took a correspondence course in engineering. It's quite a ride, we're told. All right. Your next question, sometimes bottoms play a role in history...

SAGAL: You've seen some historic bottoms in your day, I would imagine. But this is a bottom that sort of had a role in world history that happened recently. Was it the bottom of Governor Haley Barbour of Mississippi? He decided not to run for president because, he said, his butt gets numb in long meetings?

SAGAL: Was it the butt of Sadam Hussein, a British soldier stole the butt of a statue of him and came home with it? Iraq wants it back. Or C: relations between Israel and Palestine were briefly improved some years ago when Shimon Peres butt-dialed Mahmoud Abbas?

SAGAL: You're going to go for number three.

SAGAL: Do you have a problem, Mo? Is there something wrong?

ROCCA: Well, I think he should reconsider.

SAGAL: Do you want to reconsider? I cannot vouch for Mo. I can tell you that he's sincere in his desire.

FAKIR: I just like the way number three sounds.

SAGAL: All right, I understand that.

FAKIR: Okay. I'm sticking with it.

SAGAL: He's going to stick with it. Well, Mo was right. In fact, it was B. It was Saddam Hussein.

SAGAL: Last question, President William Howard Taft had the biggest bottom of any president to date.

SAGAL: As a role in his legacy, according to legend, A: he claimed his bottom would tingle whenever he should veto a piece of legislation? That's how he knew.

SAGAL: B: his butt was too big for a chair at a baseball game, and when he stood up to stretch, he began the tradition of the seventh inning stretch? Or C: what was then the square office became the oval office...

SAGAL: ...because he needed more room to turn around?

SAGAL: You're going to go for B, the seventh inning stretch? Is that your choice?

ROCCA: I think it is.

ROCCA: William Howard Taft was so large, he had a bathtub built in the White House that could fit four men.

SAGAL: Or one Taft.

ROCCA: Right, exactly. There's a picture of the...

SAGAL: Carl, how did Duke do on our quiz?

SAGAL: Duke Fakir is one of the original Four Tops. You can find him on Twitter, Facebook and you can see him perform in Bloomington, Illinois on January 21st at the Bloomington Center for the Performing Arts. Duke Fakir, thank you so much for joining us.