Accessibility links
'Cultural Revolution Cookbook': A Taste Of Humanity A new book combines the memories and culinary skills of one Chinese political dissident who lived through the country's Cultural Revolution. Since food was rationed, Sasha Gong learned to cook with whatever she could find. "There's something about humanity," she says. "It's hard to suppress." 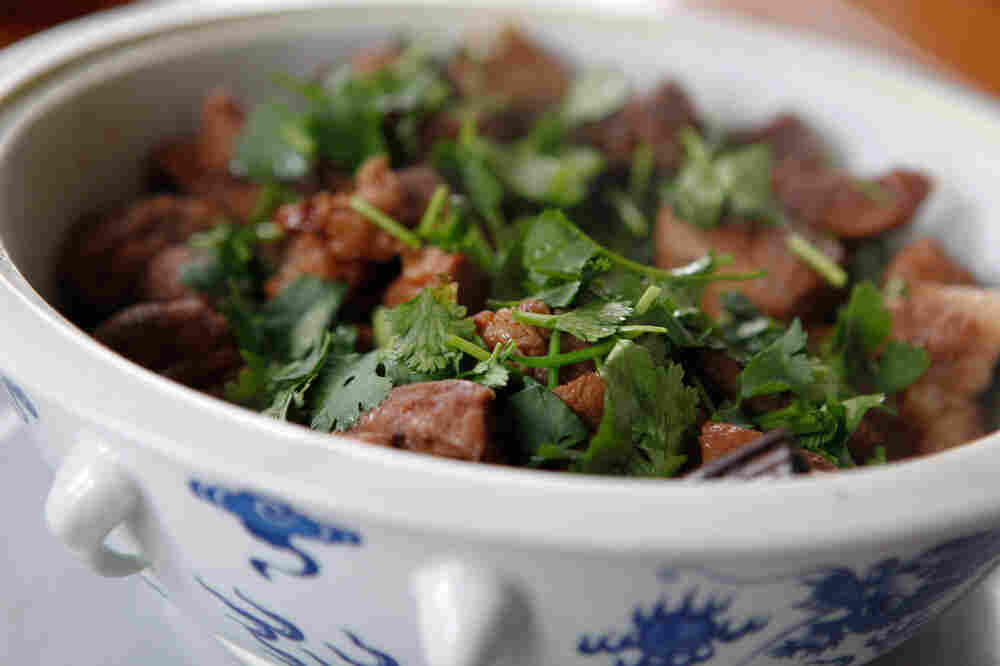 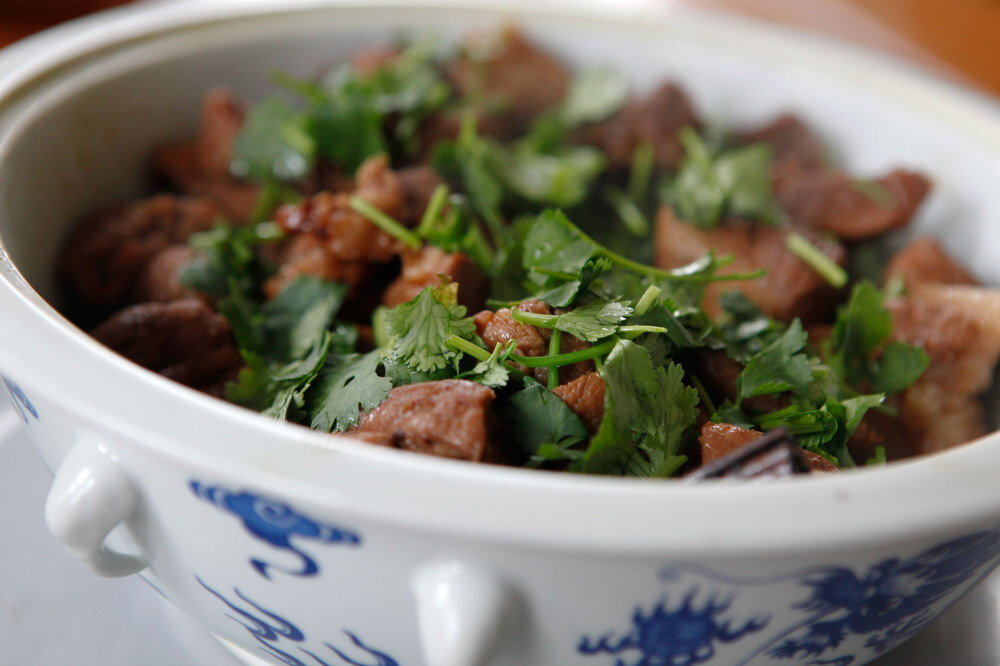 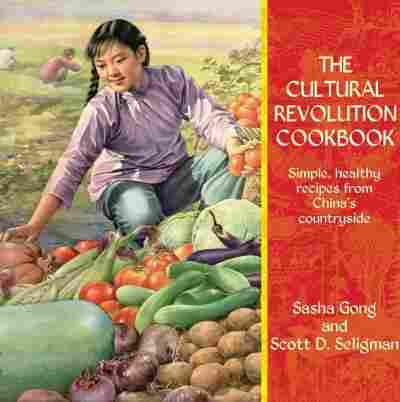 From about 1966 to 1976, China's leader Mao Zedong enforced a brutal agenda. Everything was rationed during the Cultural Revolution. Millions of people were forced out of the cities and into the countryside, where food was even scarcer. The government controlled people's movements, their livelihoods, even their thoughts.

A new book combines the memories and culinary skills of one Chinese political dissident who lived through that time. The Cultural Revolution Cookbook was written by Sasha Gong and her friend Scott Seligman, a Washington, D.C., writer who lived for several years in China.

A Celebration Of Triumph

Gong has lived in the U.S. since 1987, and she earned a Ph.D. from Harvard. But her childhood in China was a hard one. Ten years old at the beginning of the Cultural Revolution, Gong was sent to the countryside as punishment because her grandfather was accused of being a counter-revolutionary.

Gong and her family worked on farms, but the food all went to the government. Her family, like so many others, was left to fend for itself, and she learned to cook with whatever she could find.

In the cookbook, she shares the peasant recipes of that time and how food kept families together, despite a revolution that was pulling them apart. Seligman says the book is not meant as an apology for the Cultural Revolution.

"It was a horrible time. People starved, people died. A lot of people suffered. And that's not really the point of the book," he says. "This is a celebration of the people who triumphed though this horrible time when there wasn't enough food, and there wasn't freedom, and all those awful things were happening. But somehow they managed to make do with what they had."

When Gong sits down to these meals now, it reminds her of family ties. She remembers cooking many meals for her friends when she was a dissident in China, working in a factory.

"We put things together — whatever meager ration we [had]," she says. "There's something about humanity. It's hard to suppress."

Gathering Over Food To Remember

The book's cover looks like communist propaganda, portraying happiness and abundance in the countryside. Gong says there's beauty in the contrast with the real stories in her book. She says at that time the government tried to keep people from gathering in groups larger that three or four because it might indicate anti-government activity.

"You know when people gather? Over food," Gong says. 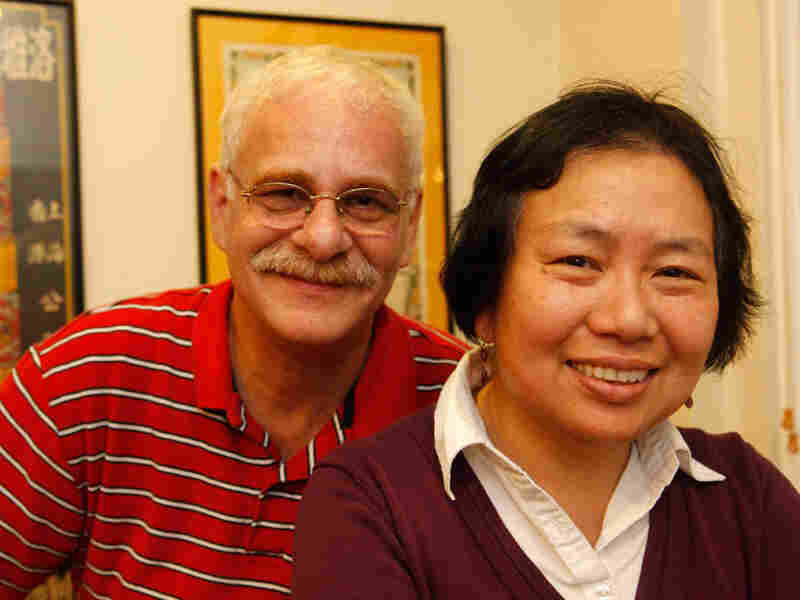 Sasha Gong has worked as a manager for Radio-Free Asia and is the author of Born American: A Chinese Woman's Dream of Liberty. Historian Scott D. Seligman is the author of Chinese Business Etiquette. Melisa Goh/NPR hide caption 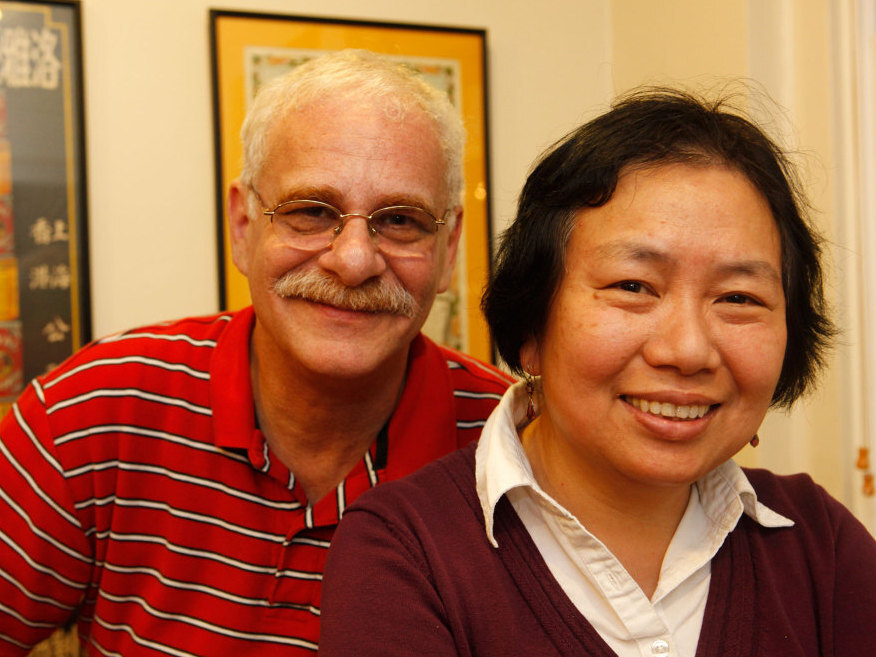 Sasha Gong has worked as a manager for Radio-Free Asia and is the author of Born American: A Chinese Woman's Dream of Liberty. Historian Scott D. Seligman is the author of Chinese Business Etiquette.

Writing the book brought up painful memories, but she says over the years she's come to realize human beings' perseverance.

"I went through a lot of bad times, but you know one thing about human beings, they always survive and celebrate life, and food is one of the major ways to do that," she says.

There's a complicated sense of nostalgia in her recollections of that chapter of her life. Seligman says that's not unusual for her generation, now far enough away from the Cultural Revolution to look back on the small moments worth remembering.

"In the last 20 years or so, China has seen a resurgence in some ways in the Cultural Revolution," he says.

In Cultural Revolution-themed restaurants in major cities, people reunite with others who had been sent to the countryside with them, Seligman says.

"They relive their past. It's not a happy past, entirely, but that's really not the point. It's their past," he says, "and one of the things they actually did learn from the peasants was how to deal with what there was and how to cook with what ingredients were local."

The last time Gong visited China was about two years ago. But traveling there is difficult, she says, because she's on the government blacklist.

"But China is a very different country now. Very different. My generation is now in charge of China in every aspect," she says. "If we are anything, we are not political extremists because we went through that. We were raised in that environment. And ... we know how to celebrate whatever little freedom we have." 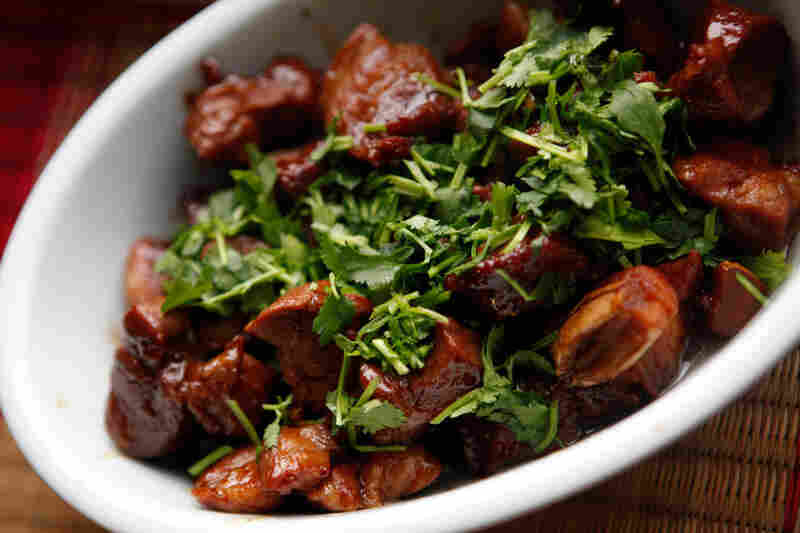 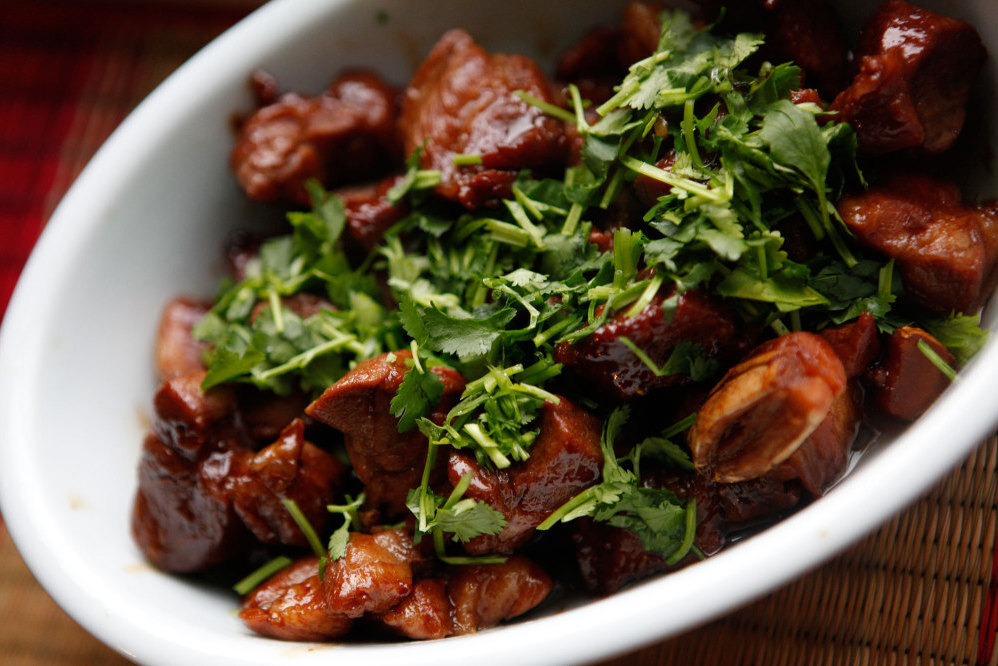 This dish is traditionally made with pork belly, but it's hard to find in many supermarkets and it's far fattier than other cuts. There's enough fat in pork shoulder to give the dish a great taste, and still save a few calories and maybe a hardened artery.

Cut the pork shoulder into cubes, about one inch (2.5 cm.) on each side. Smash the ginger with the side of a cleaver; no need to peel it.

Heat a wok and add the oil. When it begins to smoke, add the ginger and then the sugar. Once the sugar has dissolved completely, add the pork. Stir-fry the mixture until most of the liquid has evaporated, but not until it is completely dry. Then add the soy sauce, cinnamon and wine.

Mix well and then cover the wok tightly. Turn the heat down to medium and let simmer for 1/2 hour. Remove and serve.

Chairman Mao believed that the fat in Braised Pork in Soy Sauce had the capa­bility to boost his brainpower. The dish is traditionally regarded as brain food in his native Hunan Province, and it was well-known as the Chairman's favorite. In fact, he insisted that his Hunanese chef cook it for him often, even during his years in Beijing and over the strenuous objection of his personal physicians.

Mao was especially fond of eating this dish before he went into combat — either physical or political — and believed he nev­er lost a battle when well-fed on braised pork. 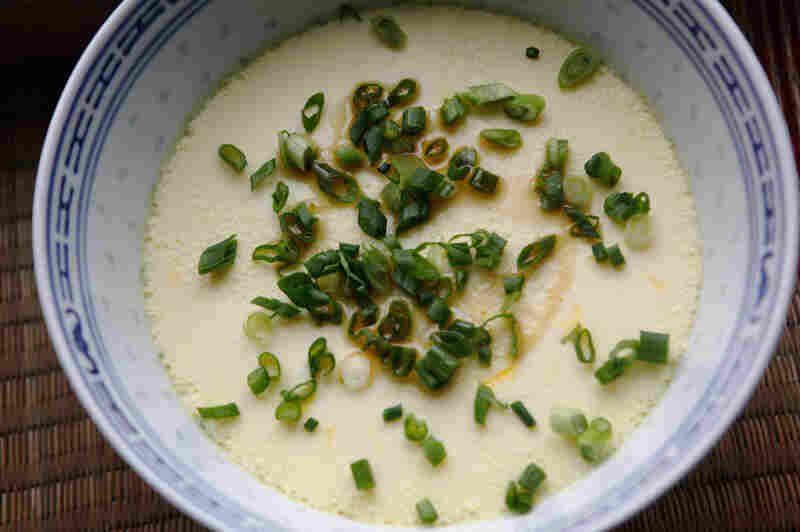 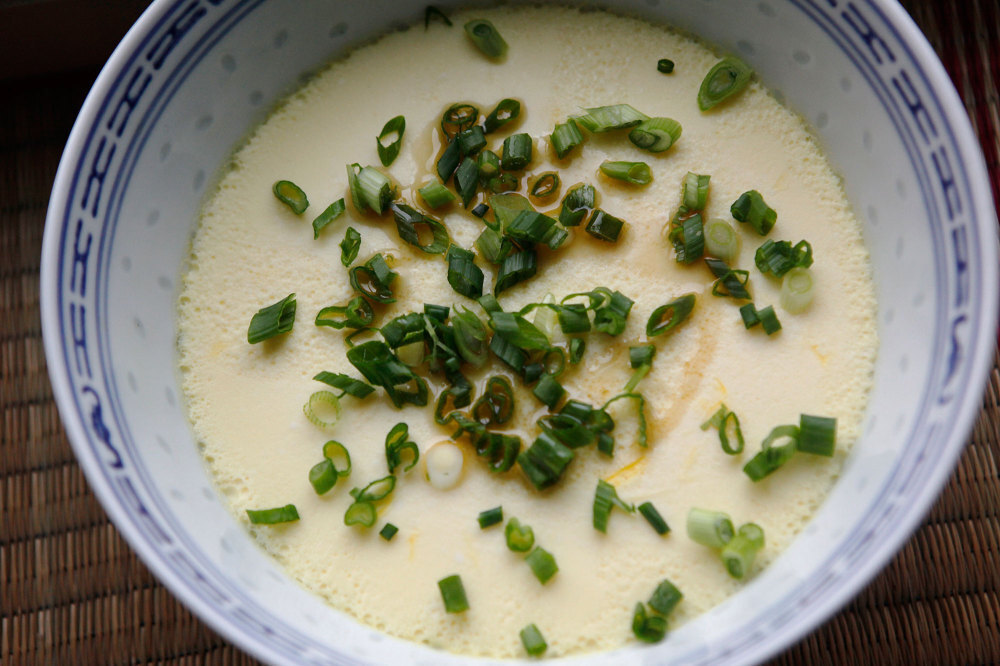 This was a particularly popular dish during the Cultural Revolution because it did not require oil, which was strictly rationed, and because portions could be increased by dilution so that adding more water meant feeding more people.

Beat the eggs in a dish and add one and a half cups (about 400 ml.) of the water and the salt. Mix well. Cut the scallion into small pieces.

Put the mixture in a heat-safe dish with a cover. The cov­ered dish should fit inside your wok. Add the remaining water to the wok and bring to a boil.

When the water begins to boil, place the covered dish in the wok and then cover the wok itself. Turn the heat down to medium and simmer for 10 minutes.

Remove from the wok. Just before serving, sprinkle the scallion and drizzle the sesame oil (if desired) on top of the custard. Garnish and serve.

Despite periodic crackdowns during the Cultural Revolution, many peasants sur­reptitiously kept chickens in their yards as a source of eggs. Once past their egg-laying prime, the chickens, too, were eaten.

Eggs could be sold in local markets and were a major source of a meager cash income. This gave rise to what many re­ferred to jokingly as the "chicken butt bank." During extended crackdowns such as the fever-pitched early 1970s, a chicken in your yard could earn you public humiliation and even a "struggle session," in which you could be dragged up on stage in front of a large crowd and denounced.

Tofu with Scallions and Sesame Dressing 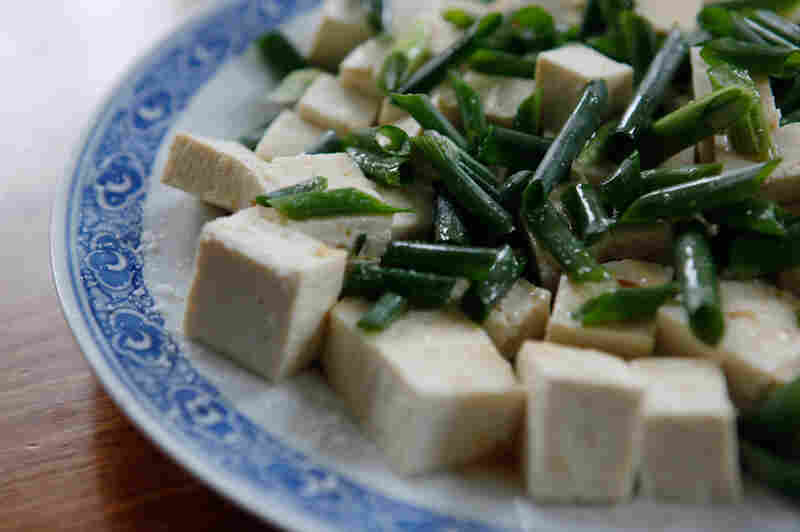 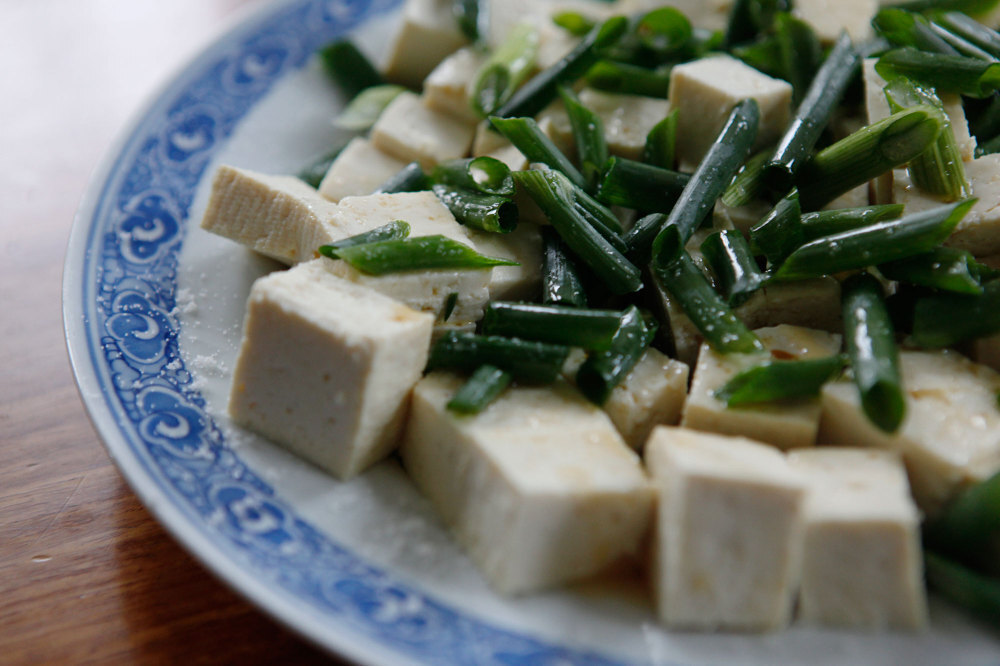 Tofu With Scallions And Sesame Dressing

Tofu was invented in 164 B.C. by a Chinese nobleman trying to make medicine, and it has taken its rightful place as a major source of protein in the Chinese diet. This amazingly simple dish is incredibly tasty, low in fat and high in protein. Use a firm bean curd to make it, because it will hold its shape better that way.

Shred the scallion into very small pieces, cutting it on the bias to maximize surface area. Rinse the tofu and place it on a microwave-safe serving plate. Warm it by microwaving it on high for one minute, or simply heating it very gently in a conventional oven.

Sprinkle the scallion, sesame oil and salt on top of the tofu pieces and serve while still warm.

Note: Obviously there were no microwaves in the Chinese countryside during the Cultural Revolution, nor did peasants have convection ovens. They would simply have soaked the tofu — which would have been freshly made — in hot water for 10 minutes to heat it up.

As Clear as Tofu and Scallions

During the Cultural Revolution, people were often accused of offenses, from stealing or engaging in extramarital affairs to slacking off or having "bad thoughts." Meetings of village production teams were forums for dispute resolution where people were often compelled to criticize themselves or defend themselves against such accusations. A good defense was to proclaim one's loyalty and demonstrate knowledge of communist doctrine, with whatever rhetorical flourishes one could muster.

This dish — its milky white bean curd a sharp contrast to the deep green of its scallions — provided a useful metaphor. If your innocence was "as clear as tofu and scallions," then anyone ought to be able to appreciate it.