Accessibility links
CIA Tracks Public Information For The Private Eye NPR got a rare behind-the-scenes look at the CIA's Open Source Center, where research analysts troll social media for a new kind of secret — those hiding in plain sight. Nowadays, CIA analysts are also under more pressure to identify potential crises, with as little as a tweet or a status update to go on. 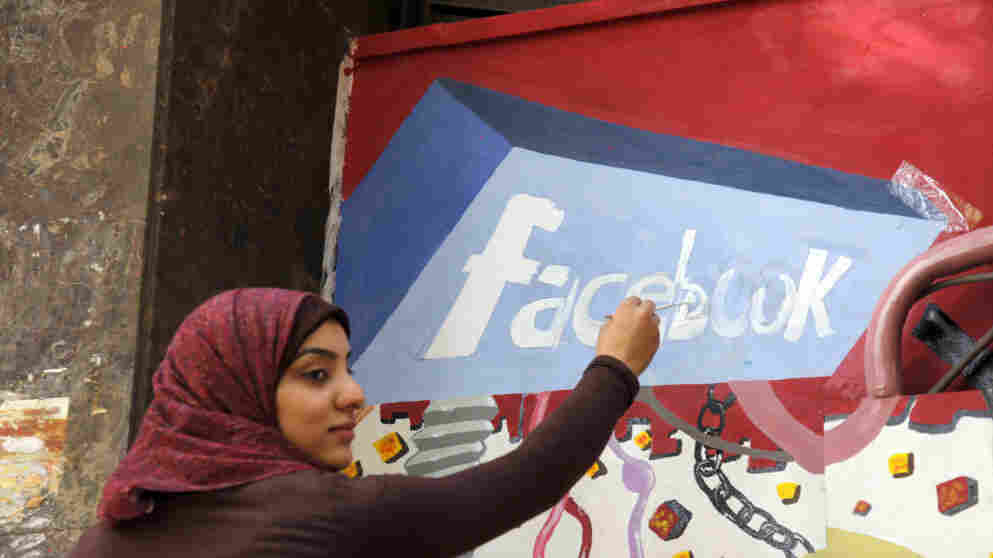 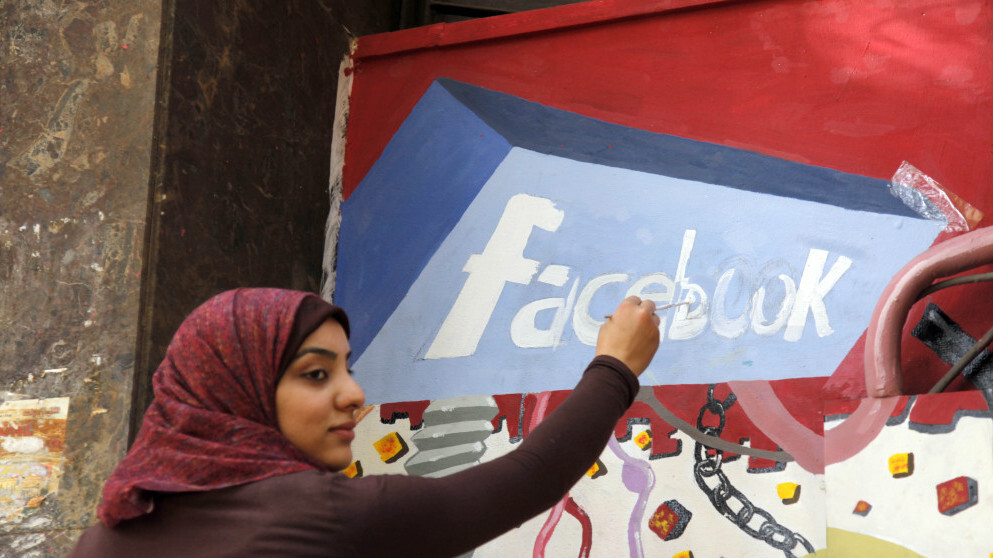 Secrets: the currency of spies around the world.

The rise of social media, hash-tags, forums, blogs and online news sites has revealed a new kind of secret — those hiding in plain sight. The CIA calls all this information "open source" material, and it's changing the way America's top spy agency does business.

NPR recently got a rare behind-the-scenes look at the CIA's Open Source Center. It operates on the down-low, though it deals with public material. We aren't allowed to tell you where the Open Source Center is. All we can say is that it's housed in an unmarked and unremarkable office building just off a nondescript, busy street.

My producer and I were asked to leave our phones in our car. We were ushered inside to a small room with half a dozen analysts working at cubicles, their eyes fixed to computer screens. There was a bank of television monitors on the wall projecting news from around the world, which gave it kind of a newsroom feel. 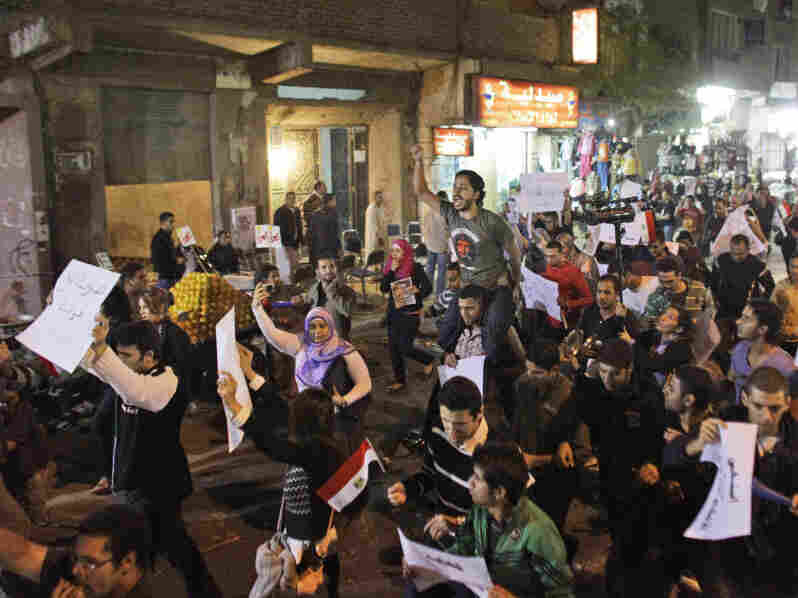 Activists march in the streets of Cairo in November. Ben Curtis/AP hide caption 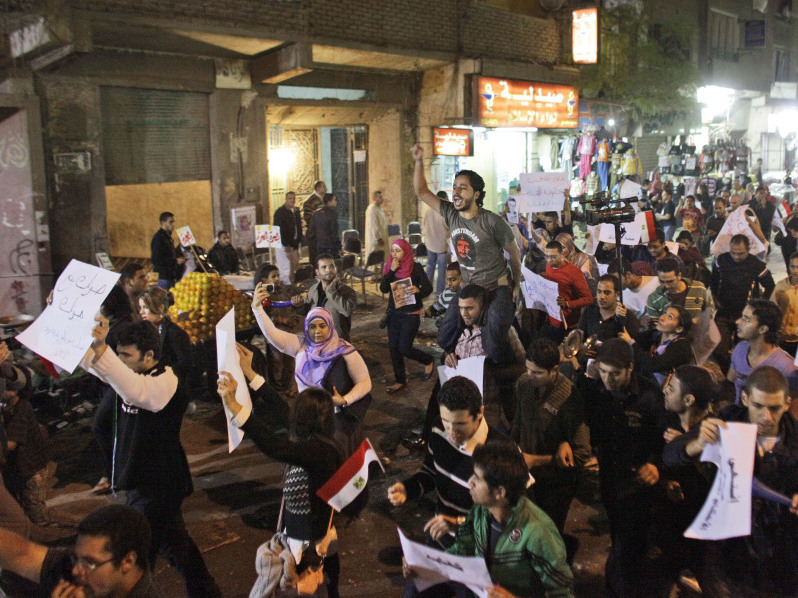 Activists march in the streets of Cairo in November.

The managing editor is Glen; he gave no last name. He pointed out a poster on the back wall made to look like a 1950s comic book, and in one corner it read, "There's no escaping the information highway."

Social media have forced the CIA into the fast lane. The Open Source Center's predecessor organization was basically a U.S. government translation service. Analysts translated foreign radio broadcasts or newspapers that sometimes took weeks to come in by ship.

Today, CIA analysts are still translating, but they're also responsible for figuring out what it all means. They're also under more pressure now to identify potential crises, sometimes with only a tweet or a status update to go on.

Doug Naquin, the director of the Open Source Center, says the volume of information the people are analyzing is massive.

He won't define "massive," but other intelligence officials say since the attacks of Sept. 11, 2001, it's been like trying to drink from a fire hose. The political revolutions erupting around the Middle East have turned that fire hose into a flood.

Lawmakers on Capitol Hill blamed the CIA for missing the Arab Spring, specifically the democratic uprising in Egypt. Naquin says his analysts knew something was brewing in the country.

"I want to clarify — we didn't predict, but we said it was going to be a game changer and did pose a threat to the regime," he says.

Naquin says that was in April 2009. His team wrote up reports on some kind of unrest, fueled by social media, but those reports were overlooked. That was in part, he says, because the CIA and the intelligence community as a whole weren't taking social media seriously.

But figuring out what that something is — that's the hard part. Naquin says his office isn't trying to uncover secrets so much as they're trying to put together what he calls a country's "narrative."

"You know, what are the underlying beliefs? So in the United States, for example, one of our master narratives is the 'American Dream.' It's the same in other countries," he says.

Building those narratives for foreign countries means tracking almost anything.

For example, "What's trending? Is it the Justin Bieber concert?" Naquin says. Yes, the CIA uses Justin Bieber as a kind of social barometer.

"Well, it says to me that their attention is not terribly focused on other issues that we may consider more serious," he says. "I kind of raised it as a frivolous point, but if Justin is No. 1, and the water situation is four or five, it'll give you sense of the mindset of a certain part of the population."

More Than Just A Google Search

We were given access to a regular morning meeting where the CIA analysts talked about what they had been monitoring, though we were told in advance that the meeting would be sanitized. In other words: No sensitive stuff in front of the reporters.

These analysts take what they learn through open source material and put it into classified reports, used by the CIA and other government agencies. But it's hard to see how this is more specialized than what a graduate student could research and write as a senior thesis. Naquin has heard this critique before.

"It's very easy to say, 'Well, this is what I found in Google, and this is what they're saying, so this must be true,' and that's I think one of the biggest changes over the past five years," he says. "People realize this is much more than just doing a Google search."

Analysts are responsible for monitoring everything that comes out of a specific country, but they're also tracking political movements and terrorist groups. Beth — that's what the CIA wants us to call her — spends her day looking at terrorist-related websites and monitoring Twitter feeds and Facebook pages that raise red flags.

"In order for these really reclusive groups to communicate with their supporters, they have to do it in open forum, often times using the Internet," she says, "where, you know, they can reach supporters around the world, and the more open they have to be, the easier it is for people like us to find it."

Social media can kind of "out" terrorist sympathizers. The challenge for the CIA is figuring out exactly who and where they are. That's complicated because the Internet makes it easy for users to hide themselves — to literally create digital identities using shadow IP addresses. Someone could be tweeting in Arabic under a Yemen email address, but it could be a U.S. citizen sitting in his house in Ohio. The problem with that is it's illegal for the CIA to monitor Americans on American soil.

"We can't tell where individual posts come from," Naquin says.

So if they're pursuing someone and, at some point in that analysis they realize that that person is sitting in the United States, how does that change what they're doing?

"I can't get into those types of questions in too much detail," he says, "but if there's any — let me put it broadly — if there's any situation in which we came across anything that involved U.S. persons, we would either stop or we would turn it over to one of our partners on the domestic side."

But the line between what kind of "monitoring" is legal and what's not could get more complicated as the technology evolves. Naquin says he's anticipating a future when our household appliances are all wired up to our iPhones and email accounts.

"The Internet is going from connecting people to connecting to things," he says. "People's thoughts that would never make it out of their homes now are available to everybody on the Internet."

For open source analysts with the CIA, that just means more information and hopefully more valuable intelligence. For those living in a country ruled by a government with a penchant for domestic spying, it's potentially a Big Brother nightmare.