Accessibility links
Legendary Football Coach Joe Paterno Mourned All day cars drove slowly past a bronze statue of Paterno, who coached Penn State's football team for 61 years until he was forced out last November. Many stopped and quietly walked up to the statue outside the football stadium to pay respects to "JoePa," who died Sunday. 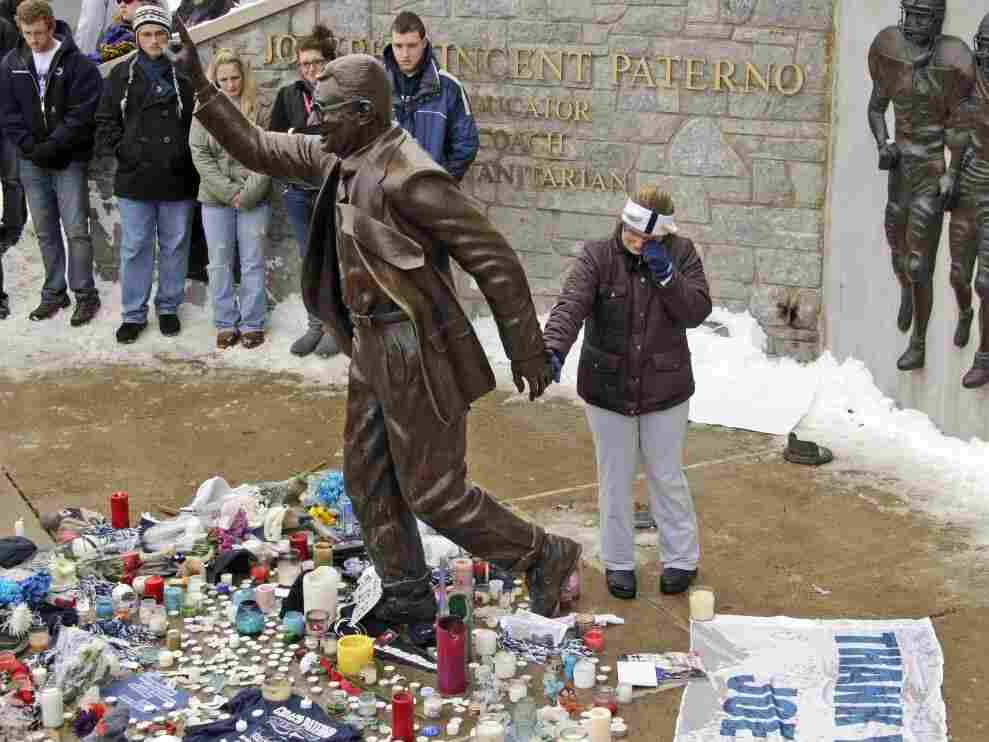 A woman pays her respects at a statue of Joe Paterno outside Beaver Stadium on the Penn State University campus in State College, Pa., after learning of his death on Sunday. Gene J. Puskar/AP hide caption 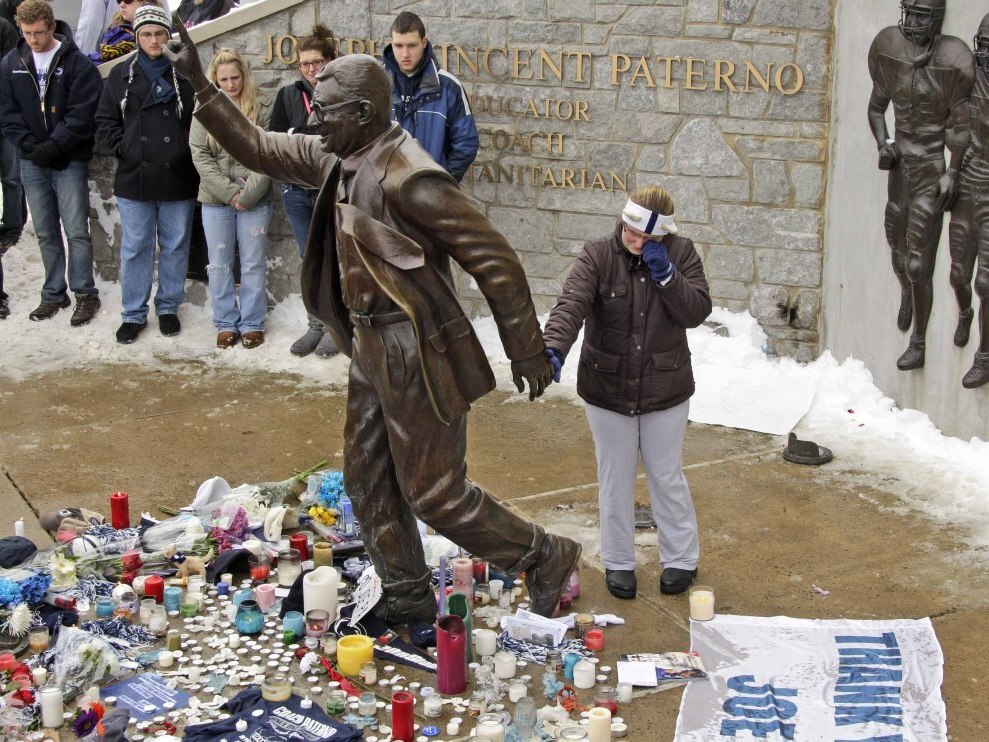 A woman pays her respects at a statue of Joe Paterno outside Beaver Stadium on the Penn State University campus in State College, Pa., after learning of his death on Sunday.

All day cars drove slowly past a bronze statue of Paterno, who coached Penn State's football team for 61 years until he was forced out last November, a casualty of a child sex abuse scandal at the school. Many stopped and quietly walked up to the statue to pay respects to the man they called "JoePa." Among them 1991 Penn State graduate Kristen Vanderbush. Shivering and with tears running down her face, she read a quote by Paterno that's on the wall behind the statue.

"'They asked what I'd written about me when I'm gone. I hope they write, I made Penn State a better place. Not that I was just a good football coach,'" she said. "And that's exactly what he did. And to be able to have a statement like that and to fulfill it, that's quite a legacy."

Vanderbush left a handwritten note for Paterno. Nearby, third-generation Penn State graduate Dave Young brought his 6-year-old son along. On the growing display of hats, flags, flowers and candles, they laid a pair of blue gloves. Young says he wore them to Paterno's final home game, against Illinois, in October.

"I had a random pair of Penn State gloves that day that I found in my drawer," he said. "They were pretty terrible gloves. I was freezing, but it was a memory from that day. It was snowy. It was awful."

"I was in many classes with football players and they would sit in the front row — every class, they would answer questions, hands were up, they were engaged," he said. "And I think that is Joe Paterno's mentality — football is a benefit of coming to school here. It's not what you're here for. You're here to become a better educated person — a better person in the long run."

As a child sex abuse scandal unfolded at Penn State in November, Paterno was mostly silent. Just after he was fired, his family announced he was being treated for lung cancer. Last week Paterno talked with the Washington Post, which released scratchy recordings of those conversations on Sunday.

"The good Lord's got a reason," he says in the recordings. "You know, I'm not as concerned about me. What's happened to me has been great, got five great kids, 17 grandchildren."

That outlook on life is one reason people like Penn State senior Zachary Robinson came out to the Paterno statue.

"There's lots of people gathered here, taking pictures, leaving candles and flowers and signs for JoePa. Just trying to show their love for him," he said.

The hospital where Paterno was being treated says he died just before 9:30 a.m. Doctors say the cause was lung cancer. He was 85 years old.