Accessibility links
Should The West Intervene In Syria? Since protests began in Syria last March, it is estimated that more than 5,400 people have been killed. Some believe it is now time for Western intervention to help stop what appears to be a brewing civil war. 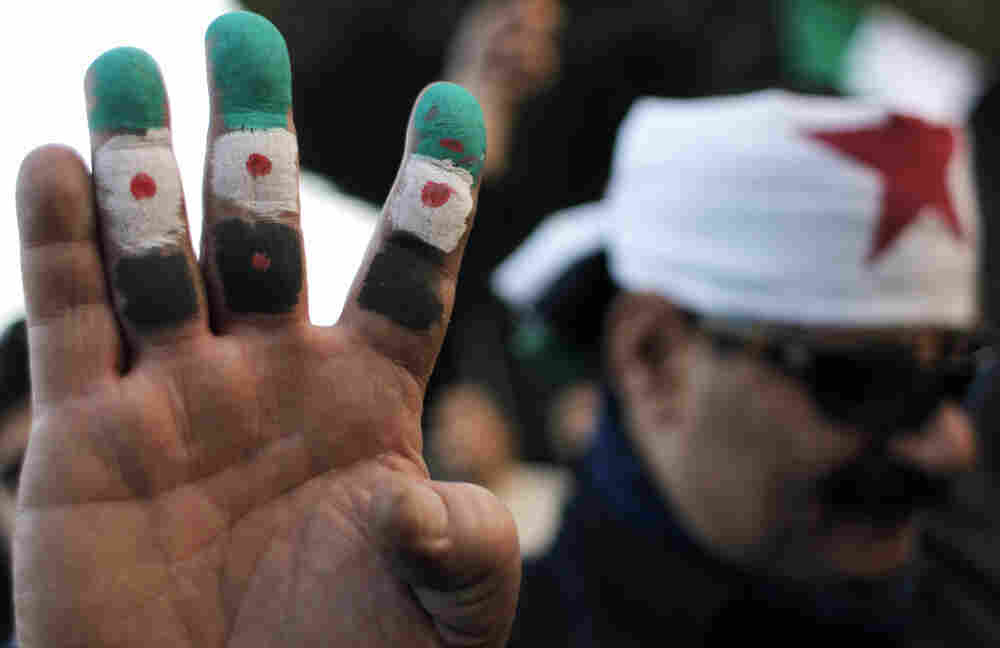 An anti-Syrian regime protester holds up his fingers painted in revolutionary flag colors during a protest outside the Arab League headquarters in Cairo, Egypt Sunday. Nasser Nasser/AP hide caption 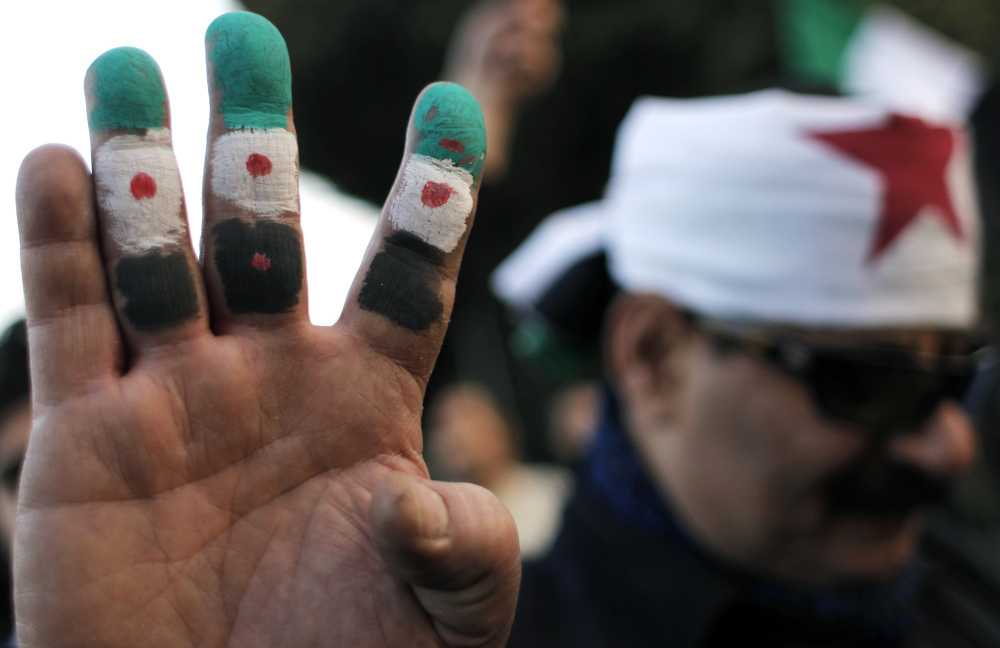 An anti-Syrian regime protester holds up his fingers painted in revolutionary flag colors during a protest outside the Arab League headquarters in Cairo, Egypt Sunday.

The Arab League sent observers to Syria about a month ago. Their mission: to bear witness to the escalating violence between soldiers loyal to President Bashar Assad and armed opposition fighters.

The presence of the orange-vested observers was supposed to discourage the violent crackdown on protesters, but since they arrived in December, almost 1,000 Syrians have died. Overall, it is estimated that more than 5,400 people have been killed since the protests began last March.

On Sunday in Cairo, Arab League ministers extended the observers' mission for another month. Despite their efforts, the group of 22 Arab states has been criticized for its inability to prevent the violence.

NPR's Kelly McEvers, reporting from Beirut, Lebanon, tells weekends on All Things Considered host Guy Raz that the situation in Syria is definitely deteriorating: The currency is dropping in value, there are shortages of heating oil and checkpoints on the road. 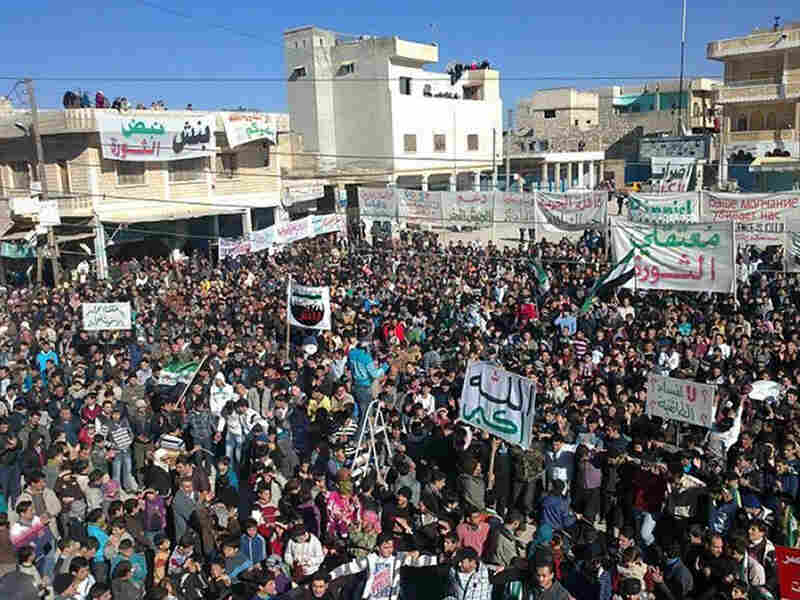 Since protests began in March of last year, an estimated 5,400 people have been killed in clashes with the Syrian regime army. AFP/Getty Images hide caption 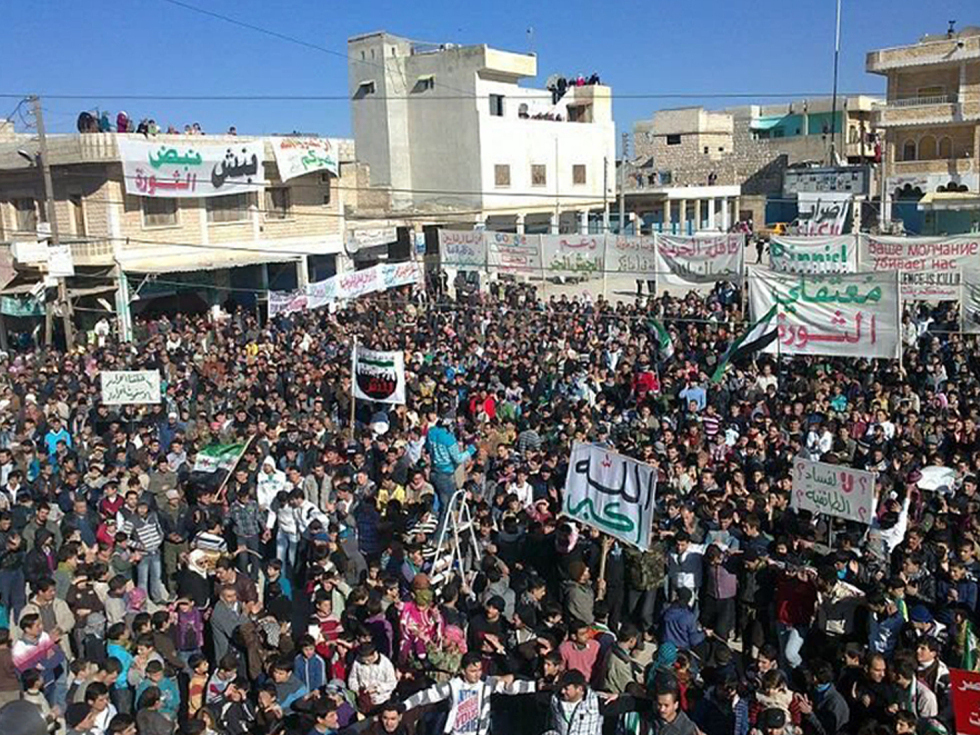 Since protests began in March of last year, an estimated 5,400 people have been killed in clashes with the Syrian regime army.

"Basically, when the sun goes down, people will shutter themselves into their houses," McEvers says. "You see analysts and journalists say, 'We might approach a civil war.' My sense is that we're already there."

Everything the international community has done so far in Syria has had virtually no effect, says Steve Cook, a senior fellow at the Council on Foreign Relations.

The growing number of deaths has led to calls for some sort of Western intervention. Cook tells NPR's Raz that anything short of a direct intervention is unlikely to have a positive outcome.

"It is time to at least start a debate about what international intervention might look like," Cook says, "whether it's a no-fly zone ... whether it is arming the opposition [or] whether it is the introduction of troops in order to separate the opposition from the Syrian military."

Although he supports the Arab League's efforts with observers in Syria and the power of the people's movement, Cook says there are limits to what they can do.

"There is no indication that the [Assad] regime is on the verge of falling; there is no indication that they even believe they have a problem on their hands," he says. "The idea that the tightening of sanctions and travel bans and U.N. fact-finding missions seems [unlikely] likely to alter the calculations of the Assad family ... willing to use whatever means possible."

The hope for a more democratic and pluralist Syria, he says, will go for naught the longer the international community waits to take more robust action.

Believing In The People

Marwa Daoudy, a lecturer of politics and international relations of the Middle East at Oxford University, says the option of Western intervention is not one favored by the majority of Syrian people.

"They're just asking for the international community to force the regime to ensure safe passage for all U.N. humanitarian agencies," she tells NPR's Raz, "but not to have military troops or even no-fly zones."

Daoudy fears intervention could lead to a backlash. A no-fly zone, for example, would need to be enforced militarily. She says those Syrians still on the fence could end up siding with the regime if they feel their country is being pressured by foreign powers.

"That would completely delegitimize what has been, so far, a very powerful and legitimate movement which needs to bring change from within," she says.

The primary interest by those encouraging military intervention, Daoudy says, should be in weighing the long-term cost for the Syrian people.

To Cook's point that nothing in Syria has been effective so far, Daoudy notes that protests continue and Syrians continue to fight against the regime.

"One has to realize that the wall of fear has fallen in Syria," she says. "People are not afraid anymore ... and they are ready to die. These people still have a lot of power and I think popular power is very important to bringing lasting change in Syria."