Accessibility links
Publishers And Booksellers See A 'Predatory' Amazon Just before Christmas, Amazon infuriated booksellers with an app that allowed customers to check out prices in brick-and-mortar stores and then get a discount if they bought from Amazon instead. Now publishers and booksellers are looking for new ways to compete with the Goliath of online retailers. 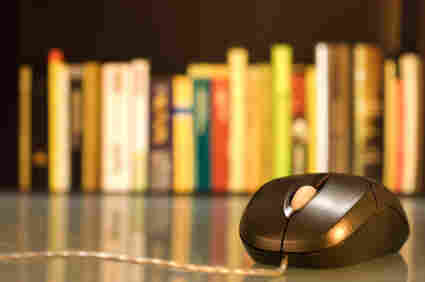 Booksellers and publishers are worried that Amazon is going to devour their industry. The giant online retailer seems to have its hands in all aspects of the business, from publishing books to selling them — and that has some in the book world wondering if there is any end to Amazon's influence.

Publishers have a problem when it comes to discussing Amazon: They may fear its power, but they are also dependent on it, because like it or not, Amazon sells a lot of books. But lately, the grumbling about Amazon has been growing louder, with some in the book industry openly describing Amazon's tactics as "predatory."

Publishers have long complained about Amazon's pricing policies; it sold e-books at cut-rate prices in order to win customers for the Kindle. Now, explains Joe Wikert, general manager and publisher at O'Reilly Media, Amazon is undercutting competitors by selling e-readers, like the new Kindle Fire, at a loss.

"The word 'predator' is pretty strong, and I don't use it loosely," he says, "but ... I could have sworn we had laws against predatory pricing. I just don't understand why that's not an issue — because that's got to be hurting other device makers out there in trying to capture this market."

More On Amazon And Bookstores

But Wikert is also well aware that Amazon has made life very convenient for consumers.

"Amazon has built a one-click model," Wikert says. "... It is so simple and easy for me to get a sample or buy the book outright. I know there are other options out there, but it requires extra steps, and that is what is challenging."

Just before Christmas, Amazon infuriated booksellers with its price check app, which allowed customers to check out prices in brick-and-mortar stores and then get a discount if they bought from Amazon.

"That's what got people saying it's time to stand up to this and try to do something," says Dennis Johnson of Melville House Publishing. Johnson, who has long been a vocal critic of Amazon, characterizes the book industry as "a very timid industry."

Melville Publishing is trying to develop a number of products to help booksellers. One of them is the "shelf talker," a digital display that helps customers browse through print books in a brick-and-mortar store but buy e-books from that store's website instead of Amazon.

But such devices might be too little, too late. Johnson would prefer to see Amazon investigated for antitrust violations, but he doesn't expect that will happen anytime soon. Johnson saw more evidence of just how many tentacles Amazon has in the book world when librarian Nancy Pearl, a commentator for NPR's Morning Edition and darling of independent book stores, struck a deal with Amazon.

There's been pushback that I've gone over to the dark side and allied myself with these people who are destroying the book business as we know it.

Amazon has agreed to publish at least a dozen of Pearl's favorite novels that have been out of print. Pearl will provide an introduction, book discussion questions and suggestions for further reading. Pearl says much of the reaction to the news has been positive, but not all of it.

"There's been pushback that I've gone over to the dark side and allied myself with these people who are destroying the book business as we know it," Pearl says.

The venture, called Book Lust Rediscoveries, is something Pearl has wanted to do for years. She had reservations about going with Amazon, but says she and her agent shopped the idea to other publishers who didn't pick it up. Pearl says she and her agent were impressed my Amazon's enthusiasm for "resurrecting books that never should have gone out of print in the first place."