Accessibility links
'American Idol': It's Still Big, But It's Not Quite The Ratings Monster It Was American Idol is still very popular. But it's not necessarily the cultural smash that it was in the age of Simon and Paula, and a recent ratings blip is further evidence that it's joining the realm of ordinary hits.

'American Idol': It's Still Big, But It's Not Quite The Ratings Monster It Was

'American Idol': It's Still Big, But It's Not Quite The Ratings Monster It Was 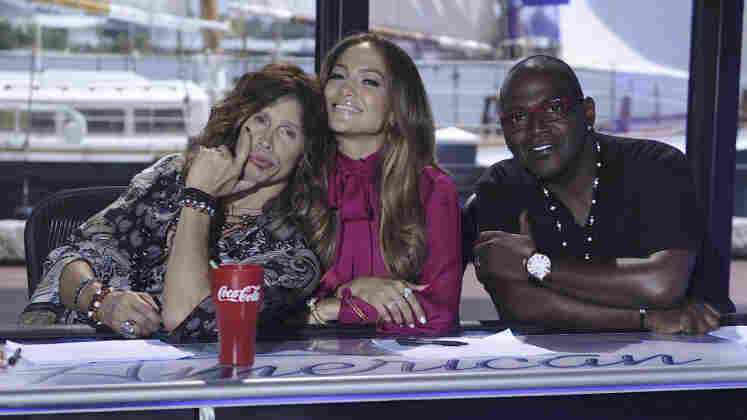 Steven Tyler, Jennifer Lopez and Randy Jackson are keeping the American Idol ship afloat just fine, but it's no longer crushing everything in its path. Michael Becker/Fox hide caption 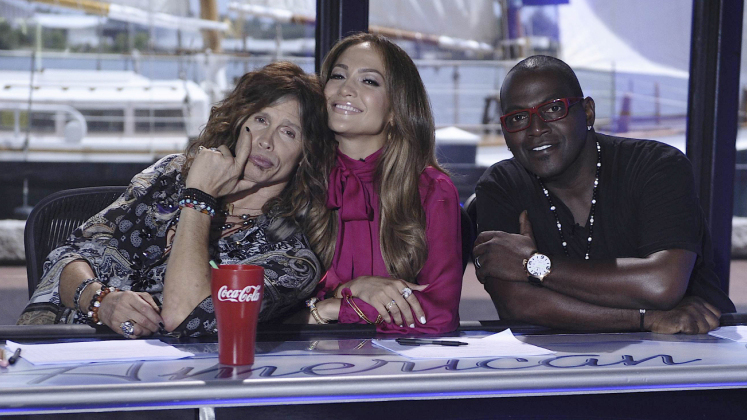 Steven Tyler, Jennifer Lopez and Randy Jackson are keeping the American Idol ship afloat just fine, but it's no longer crushing everything in its path.

It may not sound like much that American Idol came in second, by the tiniest of margins, among those viewers who happen to be 18-49 years old, for one half-hour of the three hours it ran on Wednesday and Thursday of its premiere week. And in many ways, it isn't much, even if, according to Variety, it's the first time regular programming has beaten the warbling juggernaut in that demographic.

To begin with, it doesn't break Idol's claim to being enormously popular that it finished just a hair behind CBS' The Big Bang Theory, which is also enormously popular. (Big Bang is so powerful, in fact, that even its syndicated reruns are perking things up over at TBS.) To put it in terms that the Big Bang boys would understand, this isn't Idol stumbling around with the puny humans; it's Idol being barely bested by another of television's big-fisted mutants.

At worst, as Bill Carter of The New York Times wrote last week, it may mean Idol has "officially crossed over from phenomenon to mere hit television show" — and in its eleventh season. Networks being what they are, ratings being what they are, and economic times being what they are, graduating to "mere hit television show" after ten laps is nothing to gnash a Fox's tooth over, and there's not a network — not even the uber-confident, cucumber-cool CBS — that wouldn't sell all the leather furniture in its offices to land a show with that audience. (NBC would probably melt down an entire colony of solid gold peacocks, remake them into a bust of Rupert Murdoch, and do the Macarena on a bed of hot coals to get two-thirds of those numbers and hold them for a week and a half.)

At the same time, the fact that night two of this season was down 44 percent from the same night two years ago (from, that is, the last season with Simon Cowell and Paula Abdul) does damage the narrative that was popular as last season's ratings sort-of-more-or-less hung in there, which held that the last two years of personnel changes had had no effect, and that new judges Jennifer Lopez and Steven Tyler had been firmly embraced by viewers.

The problem with that theory all along has been that watching competitive reality shows is a pack behavior, like ganging up on a helpless gazelle who's singing "Amazing Grace" like an already wounded hyena. An awful lot of people watch Idol because their wiseacre friends watch it, and the show becomes a kind of caterwauling cultural hangout, making it less likely that you'll leave right away when things go wrong. The socializing brain sometimes resists recognizing the transition from "fun and dumb" to "dumb and not even fun." (See also: bachelorette parties.)

So what's bringing the show back to Earth? Age, certainly. Nobody's immune — audience erosion had to happen sometime. There's also more competition from shows like The Voice and The X Factor, neither of which do Idol numbers, but both of which underscore that there are other choices if you like this kind of thing, and some of them don't have Ryan Seacrest, if you don't like that kind of thing.

And then there are the winners. Last year's winner, Scotty McCreery, has done relatively well for himself, commercially speaking, by not dropping into a black hole like some of the winners before him. But McCreery's "The Trouble With Girls" nevertheless sounds rather like a parody of a country song performed with all the delicacy of Yosemite Sam, and says things like, "the trouble with girls is they're so dang pretty." (Please note: Yosemite Sam was used here only because comparing Scotty McCreery to Foghorn Leghorn is already a cliche. Chew on that for a while.) The audience for that kind of shtick is passionate and buys records, but it may not be as broad as the audience for, say, Kelly Clarkson's brand of upbeat radio pop, or even Carrie Underwood's country-pop blend. More and more, Idol is a haven for country singers and contemporary Christian singers. If that's your bag, you're in luck. But if it's not, then you may wind up feeling a little left out.

But part of the problem has to be laid at the feet of the show itself, and specifically of the judging. Simon Cowell's departure left a hole that needs to be filled not by judges who are adequately nasty, but by ones who actually provide meaningful feedback that differentiates one contestant from another. Right now, instead of that meaningful feedback, there are the judges' performative displays of their own affectations. (Paula Abdul used to do that, sure, but not on purpose.)

The show is presently overinfatuated with footage of Steven Tyler spouting platitudes and leering at teenage girls, and for sheer toughness, self-styled mama bear Jennifer Lopez makes Abdul look like Robocop. During the audition rounds, Randy Jackson makes halfhearted attempts to be stinging, but if this year is anything like last year, everything after the auditions is going to consist of every judge telling every performer that he or she is a superstar in the making, even as the audience thinks, "Is it me? Because I liked that Alicia Keys song better when I heard it on Kidz Bop." (Joe Adalian wrote a fine piece about this problem of "grading everyone on a scale of A-plus to A-super-plus" in Vulture last week. I commend it to you.)

It's not merely premature to say Idol is legitimately in trouble; it's downright silly. It's a hit; it's not in range of no longer being a hit. But if trends continue, it will no longer be something you can't program against. It will not live in its own category. It won't be as dependable a launching pad for other shows, it won't lead to quite so many unsuccessful rip-offs of itself, and it will not put two springtime nights a week forever out of reach for every other network. It will not be a supernova — just an ordinary great big hit.