Accessibility links
Niche No More: Survey Shows Tablets Are Everywhere A new survey indicates that 29 percent of American adults now own a tablet computer and/or an e-reader. That number went up 11 percent in just a few weeks, a sure sign that the gadgets were given as holiday gifts and have reached the point of mass acceptance. 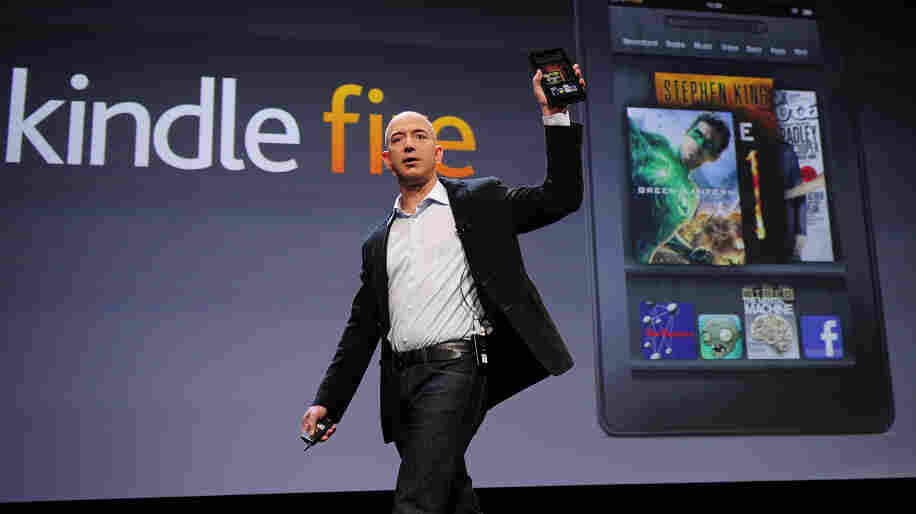 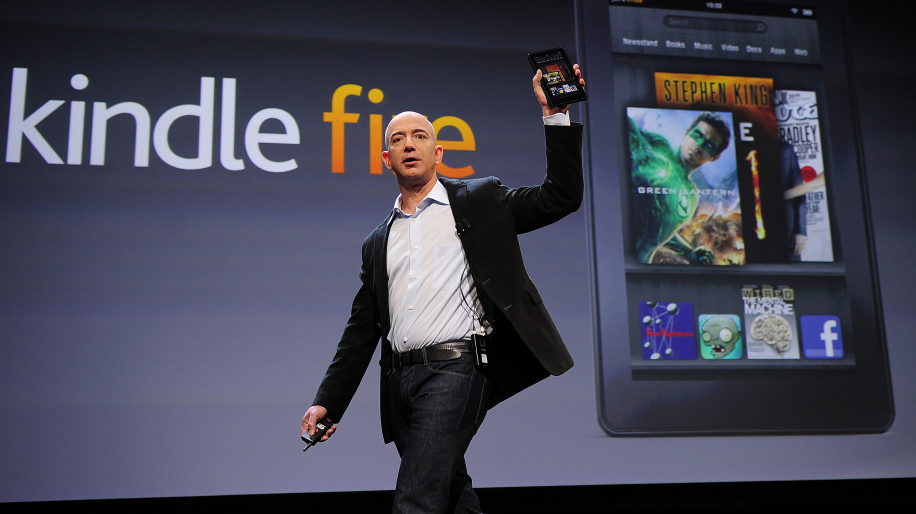 Amazon CEO Jeff Bezos introduces the new Kindle Fire tablet in New York, on September 28, 2011. The Fire's strong holiday sales were part of a trend that now has nearly a third of all American adults owning an e-book reader or tablet computer.

A few weeks ago, Mike Wendlinger bought himself a Christmas present — a Nook Simple Touch e-book reader. And when he did, he joined a wave of Americans who have combined to make e-readers and their more powerful bretheren, tablet computers, into genuine mass market devices.

In fact, a study released Monday by the Pew Research Center's Internet and American Life Project indicates that 29 percent of adult Americans now own at least one of the devices. While they have not yet reached the mass market acceptance of smart phones and some other forms of electronics, ownership of the digital devices jumped quickly with the holiday giving season, going up 11 percent between mid-December and early January.

"I bought an e-reader for my daughter back in June and I played with it a bit before I gave it to her," says Wendlinger, a 53-year-old financial consultant who lives in Severna Park, Md.

"I'm not sure if I'd call myself a technophobe, because the technology doesn't scare me, but I certainly am not the first person to go out there and buy some new gadget, either," he says.

But a few weeks ago, Wendlinger bought himself the Nook Touch.

"I'd been thinking that I should catch up on the literary classics, but I don't have time to go to the library," he says. "When I found out a lot of the classics were free as e-books, that helped make my decision."

Could the sudden upsurge in tablet and e-reader sales represent a mass market tipping point for the devices? "Absolutely," says Sarah Rotman Epps, a senior analyst with Forrester Research, a technology consultancy.

But there's something else at work, Epps explains. Consumers adopt new technology faster than they once did.

"When Apple's first iPod came out, it took them two years to sell their first million units," she says. "Now we have gadgets that are selling a million units a day."

In a news release, Amazon claimed it was selling "well over 1 million Kindle devices per week" in December, although it did not release exact figures. Apple, maker of the iPad tablet, reports its first-quarter earnings Tuesday.

Consumers, she says, "have already climbed the learning curve," know how to work the devices and are comfortable managing their digital content, whether it's music or e-books, apps or games.

While e-readers and tablets may have ridden a particularly big wave this Christmas, Michael Gartenberg, an analyst with the Gartner Group, thinks the "sea change" happened some time ago.

"I think we reached a tipping point when the Kindle was introduced and then the iPad. Those were clearly going to be the first products in this segment that could be commercially successful," he says.

"With the spectrum of price points of these devices, of course we're going to see market share grow exponentially," Gartenberg says.

Despite the rise of the e-reader, neither Gartenberg nor Forrester's Epps see a demise of the old-fashioned book.

"Paper books still have huge advantages," Gartenberg he says. "I can read a book and give it to you, and you can give it to another person. There's a tactile feeling to books, and they still have a better resolution than the best e-books."

Epps says she recently bought the hardcover version of The Family Meal: Home Cooking with Ferran Adria. "Cookbooks — that's a segment of the traditional book publishing that is likely to survive," she says.

But other segments of the publishing market could be under threat.

Gartenberg sees the possibility of textbooks disappearing because "it's easier to carry e-books than to lug all those books around campus," he says.

"Trade paperbacks, for example — there may not be a market for that imprint in five to 10 years," Epps says.

The days of best-selling hardcovers may be numbered, too, she says. It turns out that people who are strong early adopters also tend to be the same folks who rush out to buy new books in paperback.

But with thousands of classics available for free, Barnes & Noble is unlikely to make much money off of Wendlinger as he reclines on the beach reading Maugham or Proust on his new Nook.

Not to worry, says Epps.

Those free books are an enticement, "but the majority of e-readers buy and read new releases. So, they are reading some of those out-of-copyright books, but they are reading a lot of best-sellers, too."