Accessibility links
Is The State Of The Union Address Obsolete? The annual where-we-stand lecture delivered by the president to a joint session of Congress has for decades been an opportunity for a national report card putting current events in calm, codifiable context. It was a monumental moment in a relatively quiet world. But does it work in the age of Twitter?

Is The State Of The Union Address Obsolete?

Is The State Of The Union Address Obsolete? 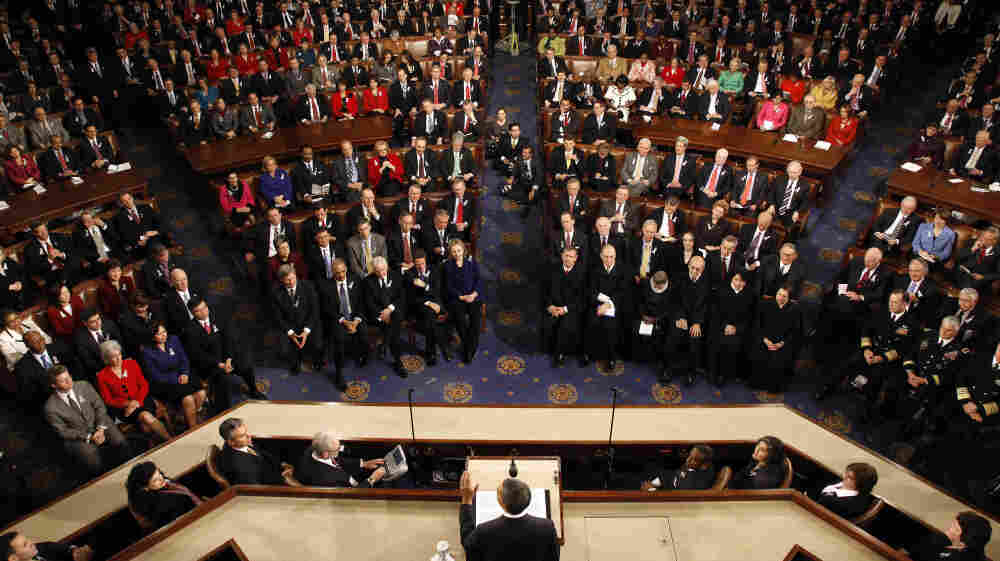 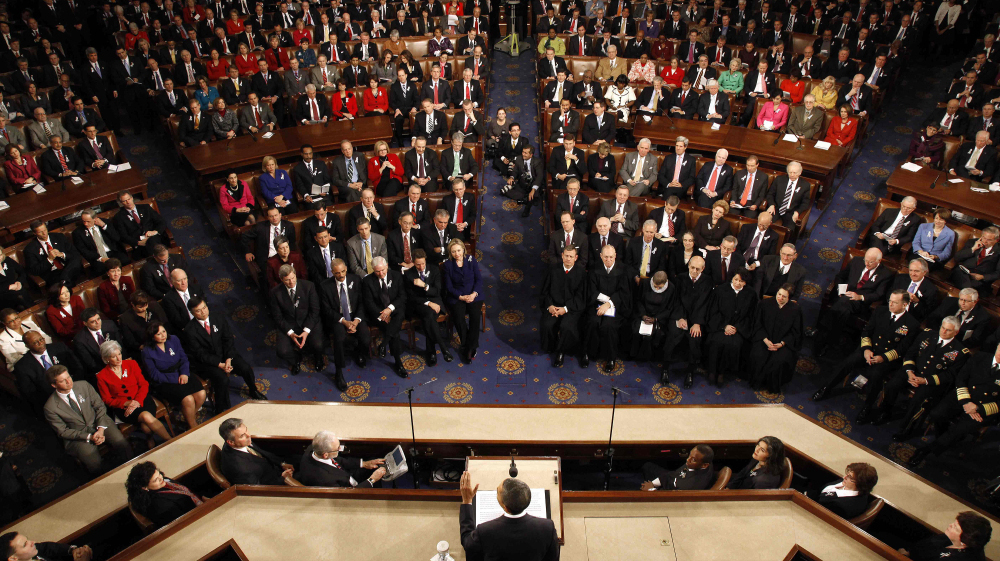 Given the nonstop, stereo-rock news cycle, the warp speed tempo of geopolitics and the constant to-and-fro between the media and the president, has the State of the Union address become obsolete?

Traditionally, the speech — an annual where-we-stand lecture delivered by the president to a joint session of Congress — has for decades been an opportunity for the professor in chief to issue a national report card and put current events in calm, codifiable context.

In the past, it was a monumental moment — surrounded on each side by a few days of national reflection — in a relatively quiet and slowly whirring world

These days, however, there is no time — nor inclination — for a pause in the process. America is a comically sped-up motion picture, not a snapshot. America is a bullet train, not a diner. America is the river rapids, not a reflecting pool.

Everybody knows all the time what President Obama thinks about everything, from the White House website and countless other political sites, TV shows and press reports. And everyone knows what everyone else thinks about the president — and the state of the union.

You see? A congressman is calling the state of the union potentially pathetic. Between such previews and reviews, the speech itself has arguably become inconsequential, as anachronistic as one of Franklin Roosevelt's fireside chats.

The State of the Union address, says Larry Sabato, director of the University of Virginia Center for Politics, "is a big production that matters for a whole 24 hours, or less. But we all play along."

He says, "I'm serious in that I don't believe State of the Union speeches have any long-term or even medium-term effect, and increasingly so."

Sabato is not alone in questioning the worth of the address.

"It is time to end the meaningless annual ritual of the State of the Union address," historian Lewis Gould wrote in The Washington Post in 2006. "What began as a yearly survey of the nation's condition has deteriorated into a frivolous moment of political theater and continuous campaigning."

And, according to the Roaring Republican blog, "the SOTU has become the least influential moment of the president's year."

A Work In Progress

The Constitution requires that the president "shall from time to time give to the Congress information on the State of the Union." But turning that into a formal annual speech before a joint session of Congress is a relatively new phenomenon.

Nearly 90 years ago, in the winter of 1922, President Warren G. Harding delivered a 7,000-word State of the Union address to a joint session of the Senate and the House. According to The Washington Post back then, it was the first time the annual speech was broadcast on radio.

Examining the gravitas of the moment, The Washington Post noted that "it is understood that [Harding] will go into considerable detail in dealing with a number of subjects, and it is understood that he will vigorously meet all the difficult problems that have been brought to the administration in the last twelve months."

In January of 1936, when Franklin D. Roosevelt was preparing to run for re-election — as Obama is doing now — Roosevelt used the State of the Union speech to attack critics of the New Deal. "The setting for the President's appearance was one of the most colorful and impressive ever witnessed at the capital by the oldest members and attaches of Congress," The New York Times reported. Raucous Republicans "became quiet ... to listen to the philosophic quotation with which the President ended his speech. And at the final word, the Democrats set up a din of cheering which continued until after the President had retired from the chamber."

For presidents, those were the days. Now the SOTU has become circusy for many people. There are snarky watching parties, like those organized by the right-leaning Americans for Prosperity, and there are SOTU drinking games, including this one from the San Francisco Chronicle.

Does the nation still take the State of the Union seriously or should it just be scrapped altogether?

Former speechwriter David Kusnet, who has firsthand experience with the ritual, says that the SOTU speech "is a great tradition that keeps evolving but shouldn't be eliminated."

Kusnet, senior wordsmith at the Podesta Group public relations firm, served as President Clinton's chief speechwriter. Kusnet worked on Clinton's 1993 economic address — a de facto State of the Union address since it was delivered in February 1993, to a joint session of Congress — and Clinton's State of the Union speech in 1994.

The annual moment, Kusnet says, is an example of "American democracy as a work in progress."

Kasey S. Pipes, a former speechwriter for President George W. Bush, says that a powerful State of the Union speech can still "provide grist for the media mill."

On Tuesday night, says Pipes, now an author and senior fellow at the Eisenhower Institute of Gettysburg College, President Obama "will have the chance to offer new ideas on creating jobs, balancing the budget and paying down the national debt. Each of these sections of the speech can be discussed, debated and disputed by pundits on blogs, television shows and social media for hours, days and weeks."

Pipes says: "What will take the Republican candidates for president hours of debates and millions of dollars in advertising buys to achieve, President Obama can achieve with the State of the Union: get media coverage and set the terms of the national debate."

State Of The Usual

This year's speech presents special hurdles. For instance, what exactly is "the union" nowadays? Whatever it is, it is far from unified.

And as someone who is running a country and running for re-election, Obama has a dual challenge. "Obama has never been especially adept at policy rhetoric, the way Clinton was," says David Greenberg, a professor of history and media studies at Rutgers University. "But neither can he use the State of the Union merely as an excuse to give a rousing campaign speech. So he does have to walk a tightrope."

In general, the annual speeches have become "laundry lists of legislative and other policy goals for the coming year," Greenberg says. "During a campaign, however, the public looks to the president for rhetoric of a more inspirational sort."

Historically, "campaign-year State of the Union addresses are not memorable," Greenberg says, "precisely because they have this split character. "

Sabato, meanwhile, questions the value of the State of the Union speech. "The news cycles are compressed; the story has to change; reality triumphs over rhetoric," Sabato says.

And rather than being a pep talk, the speech has turned into a reality check. To maintain their credibility, especially in election years, Sabato says, presidents have to call the State of the Union the way they see it. "You can't go in and say, 'The state of our union is terrific,' when that's not what Americans feel."

President Obama may think the economy is gradually strengthening, Sabato says, "but he'll have to be very careful how he tries to sell this to a skeptical public. Voters are especially cynical in an election year; they know it is in the president's interests to look at America through rose-colored glasses."

All Obama "can reasonably do in this speech is remind viewers what he has actually accomplished and what he hopes to do over the next year." Sabato says. "Surprisingly, he'll be on firmer ground in foreign policy than domestic policy. Obama has a lot to brag about in the former area, less so in the latter."

Regardless of what is said Tuesday night, Sabato says, "everyone senses the deadening partisan gridlock in Washington. Presidential grand plans will crash with a thud. People instinctively know they just aren't going to happen."

And so there is the danger that the address becomes atavistic, the Staid of the Useless speech in a never-sleeping Twitterverse of short bursts and shorter attention spans.

"I'm most interested to see whether Obama decides to begin his re-election run against the 'do-nothing Congress' by challenging them directly, in person," Sabato says. "He risks a bad reaction from them, possibly, but if he wants to appear Truman-like, here's his first real chance."

And even if the electorate is antsy and easily distracted — and part of the audience is hostile — the formal setting does give the president a platform for focusing on the agenda of his choice — governance, re-election or both. And the ability to do so at a measured pace, in front of a captive audience and the chance to use more than 140 characters.

Maybe think of it as a long-winded status update.