Accessibility links
Slab City: An Escape For The Down And Out Slab City is a 600-acre chunk of California desert on an abandoned WWII artillery training range, home to long time residents, newcomers and transients. There is no running water, no sewers, and no other comforts of modern day civilization, and the folks of Slab City like that just fine. 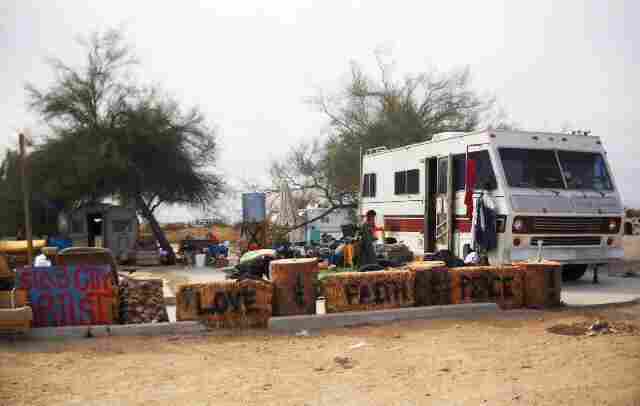 Slab City is an informal community in the California desert on the site of a former WWII artillery range. The recent recession has sent the town a new wave of people who have fallen on hard times and are looking to escape the burdens of modern life. Gloria Hillard/For NPR hide caption 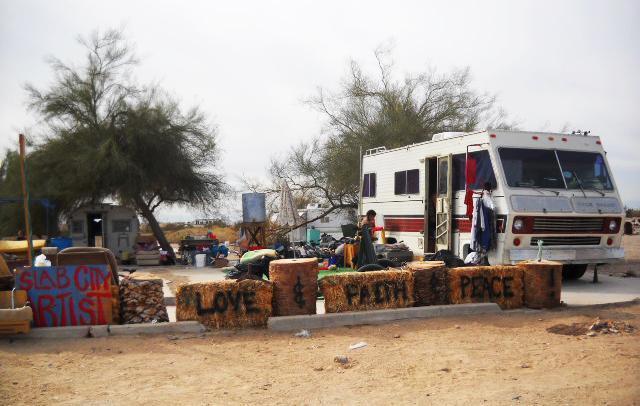 Slab City is an informal community in the California desert on the site of a former WWII artillery range. The recent recession has sent the town a new wave of people who have fallen on hard times and are looking to escape the burdens of modern life.

There are no signs leading to Slab City. From Los Angeles you head east deep into the desert, and then south, past the Salton Sea. For years, a diverse group of people has been drawn to the abandoned Marine base, but the troubled economy has driven even more travelers to the place dubbed "The Last Free Place in America."

Following the tire tracks of countless RVs, trailers, vans and campers, you pass a landscape of the vehicles that have taken root here, their tires now soft on the desert floor.

"You kind of give yourself your own address out here, and we're 100 Low Road," resident Vince Neill says. Neill parked his aging brown and tan RV here a few months ago.

We're in, umm, what's that word? Transition? We also came out here to experience life in Slab City because we heard so much about it.

"We all live in there, me and the wife and six of the kids," he says, referring to his family's RV. The makeshift home is anchored by a long concrete slab, encircled by a couple abandoned trailers and a speed boat filled with bottles and cans. The Neills came here from the Sacramento area. A few puppies are running in circles as a teen in a pink tank top sweeps up debris from recent winds.

"I clean up around the slab, I treat it like as if I was living in a house," Allie Neill says. The 18-year-old is Vince Neill's oldest daughter.

"We're in, umm, what's that word? Transition?" Allie says. "We also came out here to experience life in Slab City because we heard so much about it."

Slab City gets its name from the numerous concrete foundations that dot the land, the only reminder of Camp Dunlap, a World War II Marine artillery training base. The state is somewhat of an absentee landlord on this 600-acre patch. Population estimates are anywhere from several hundred to a few thousand people.

A nearby RV has a generator. There's no running water, no power lines, no sewage service and no trash pickup, which can give the place a Mad Max post-apocalyptic feel. Rusted bicycles and box springs peek through small mountains of twisted metal. 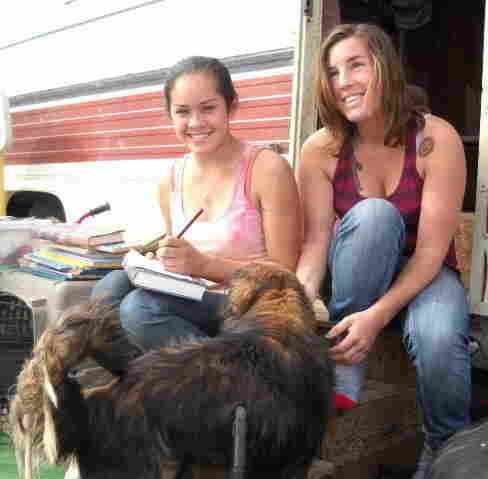 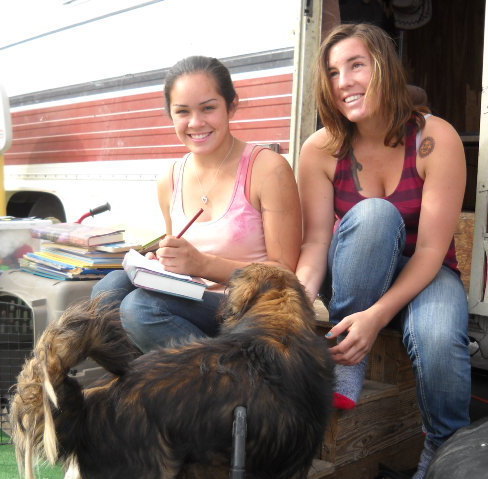 Down Low Road at the Oasis Club, a few residents are sitting at an outdoor table rolling their own cigarettes. A camper truck piled high with belongings approaches. They look up warily.

"There's people, before you take anybody's picture you want to ask them to make sure its ok, cause there are people out here being stalked," a resident known as "Tennessee" Ken Freeland says.

Freeland is a man of undetermined age and background in a cowboy hat and plaid shirt. This is his fourth year living in Slab City.

"Out here, nobody bothers you," Freeland says. "You treat people like you want to be treated. Everybody gets along great."

A yearly membership to the Oasis Club costs $20. Coffee is served from 7 a.m. to 10 a.m. Lynne Bright runs things at the club. The 55-year old says some people who come to Slab City have a misconception about the place.

"They think that, come to Slab City and you will be provided for, and that's the furthest from the truth," Bright says. "This little piece of ground that you're standing on is free. That's all."

Everything you need to survive, from propane to water, you need to buy or bring with you. Bright, a former public service employee, met her husband here three years ago.

Are They Allowed To Live There?

The land Slab City is on is owned and managed by the state of California. Camp Dunlap, the former World War II base that left the concrete "slabs" that form the foundation of Slab City, was given back to the state in 1961 and subsequently dismantled. The state still owns the land, and the people living in Slab City are technically "squatters," but the government has left the settlement alone. There are no services, so the state is not spending any money to keep the place up. But garbage and human waste has become a problem in the area, which is bothering some of the neighbors. "In my opinion, the county should come and check and make them clean it if they're going to stay there," says Alma Holcomb, a longtime resident of the closest town, Niland, who works at a general store there. "Because they make us clean our yard." At the same time, Holcomb says the Slab City residents bring a lot of business to Niland, especially when the snowbirds arrive in the winter. Norma Wright, owner of Bobby D's Pizzeria in Niland, agrees. "We really need those people to come, it's good for our businesses."

Toward the end of Low Road the desert neighborhood starts to change. There's no trash and the motor homes are more expensive. Rick Lee recently sold his house in Texas and bought one here.

"It was better for me to just go ahead and take the loss and sell it," Lee says. "Since I been out here, I've heard quite a few people that's done the same."

"Up until 2008 I was doing very well, and in 2008 the market collapsed for me," Depraida says. He still makes art work and sells custom designed T-shirts for the increasing number of tourists who drive by. "There's a great sense of community here," he says.

The snowbirds made up one of the first communities here years ago, mostly retirees that flocked here in the winter. In fact, Low Road gets its name from a club called Loners on Wheels. Gas barbeques and lawn furniture take their place in front of fully equipped RVs. Sixty-two-year-old Barbara Russell agrees that it doesn't look like the rest of Slab City.

"A lot of those are young people who have run away from this or that," she says. "We haven't run away — we've run to."

The sky has turned a shade of turquoise and in a few more weeks the desert flowers will bloom. Come May, temperatures can reach over 120 degrees here. That's when the snowbirds will depart. And only the rattlesnakes, scorpions and Slab City's most hardy residents will remain.