Accessibility links
Conn. Tribes Hope To Win Big With Online Poker The governor is negotiating a deal that could put tribes in charge of the state's new online gaming enterprise. Casino operators and state officials are closely watching to see what kind of impact online poker will have on their revenue. 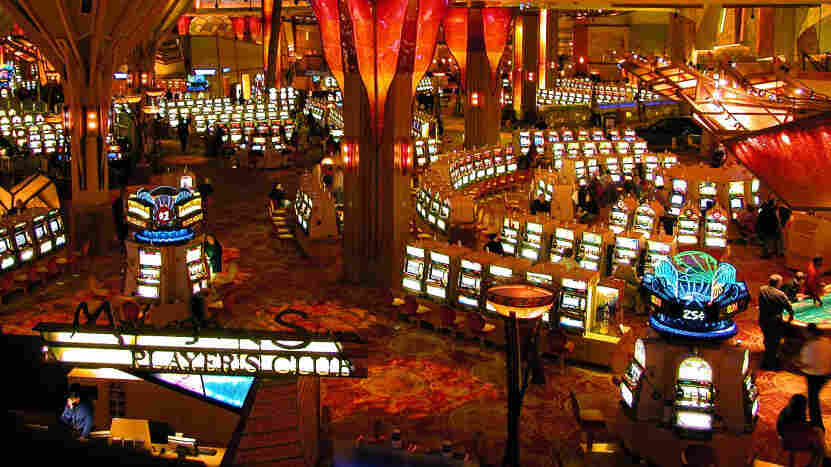 Gamblers play on some of the more than 6,000 slot machines at Mohegan Sun in Uncasville, Conn. The casino is owned and operated by the Mohegan Tribe. Mario Tama/Getty Images hide caption

Connecticut has two casinos that generate millions of dollars a year for the state. Following a recent change in the interpretation of regulations against online gambling, casino operators and state officials are closely watching to see what kind of impact online poker will have on their revenue.

Even though it's a weekday, there are plenty of people sitting at slot machines or playing table games at the Mohegan Sun Casino in Uncasville, Conn.

The entire casino resort covers 185 acres. It has an upscale 1,200-room hotel that reaches 34 stories high, nightclubs, restaurants by celebrity chefs Bobby Flay and Todd English, and an arena that hosts big-name entertainers from Neil Diamond to Toby Keith.

2006 – The Unlawful Internet Gambling Enforcement Act of 2006 curbs a boom in online gambling by prohibiting businesses from accepting payments from a bet or wager that involves the use of the Internet. Online gambling sites, which previously generated an estimated $6 billion a year from poker alone, are driven underground.

2010 – Officials in New York and Illinois press the Department of Justice on whether existing laws might prevent them from selling lottery tickets online.

2012 – Following the call for clarification, the Department of Justice issues a lenient interpretation of the Wire Act of 1961, which states that the prohibitions on betting via telecommunications systems apply only to "sport-related gambling activities." Effectively, this means states can authorize online gambling as they see fit.

Bozsum says all of those attractions help keep casino patrons at Mohegan Sun.

"It's a different market now. People come in, they gamble for a little while," he explains, but "if they win, they leave immediately. In older times, people would spend a lot more time at a table, more time at a slot machine."

A Comeback For Casinos

At the height of the recession, revenue dipped more than 20 percent. Now, it's slowly climbing again.

Under an agreement with Connecticut, both casinos give 25 percent of their slot revenue to the state. When the U.S. Department of Justice cleared the way for states to operate online poker and lotteries last month, Bozsum says, he immediately made a call to Gov. Dannel Malloy. Since then, Malloy has spoken out in favor of Internet gambling.

"We're talking about the employment of tens of thousands of individuals," he says.

The governor is negotiating a deal that might put the tribes in charge of Connecticut's new online gaming enterprise.

Malloy says he's no fan of gambling, but he feels the state will lose big if it doesn't explore this potential new revenue stream. This is more important now as other states, including Massachusetts, enter the gaming market.

"They've announced they're going to have five casinos," he says. "New Jersey Gov. [Chris Christie] has announced that he wants New Jersey to be the online gaming capital of the world tied to the presence of the casino industry, which is competitive with our industry in the state of Connecticut. We've got to watch those things."

Whether Connecticut residents are watching depends on whether they're regular casino patrons.

Buses heading for the casinos pick up several times a day at parking lots across the state. Some people waiting to board say they just play slots and have no interest in online poker.

"I'm intrigued by it, but nothing like doing the real thing," he says. "It's nothing like the real thing. Being on the computer is all right, but at the end of the day, everybody goes to the casino. I like to breathe the air, you know, sip the drinks, watch the people."

Bozsum says there are a lot of people like Jackson who love the casino atmosphere.

"They may play at home, too, on their down time," he says. "They may play at work. Who knows? There's no way to tell who's going to play. But it will introduce a lot of new players to the game of poker."