Accessibility links
Weekly Standard: The Rich Really Are Different Romney has suffered recent attacks over his time at Bain Capital. Jonathan V. Last of The Weekly Standard argues that Romney's real skills — as an investor — differ in important ways from the ones he's been advertising, which may explain why Republicans are skeptical of his candidacy. 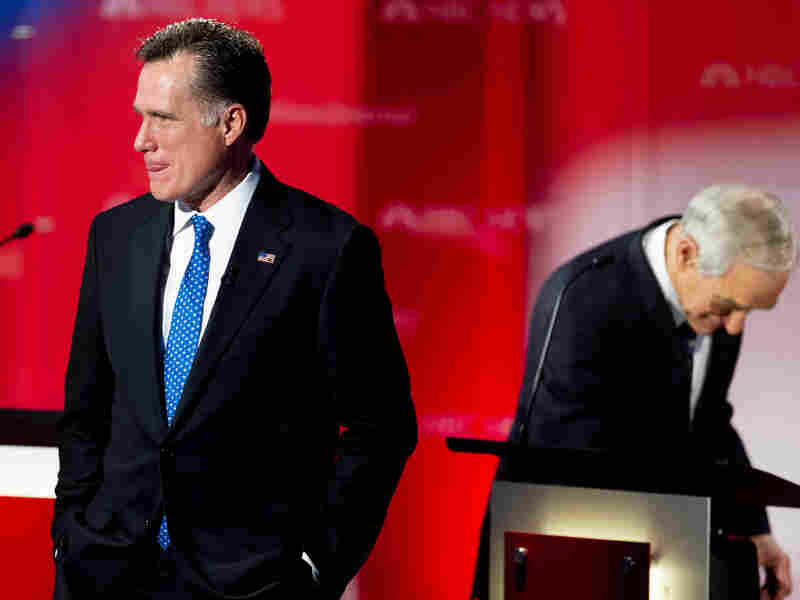 Mitt Romney stands on the stage during a commercial break as Republican presidential hopefuls take the stage for the Debate at the University of South Florida, Jan. 23, 2012, Tampa, Florida. Romney has suffered under attacks about his time at Bain Capital. Paul j. Richards/AFP/Getty Images hide caption 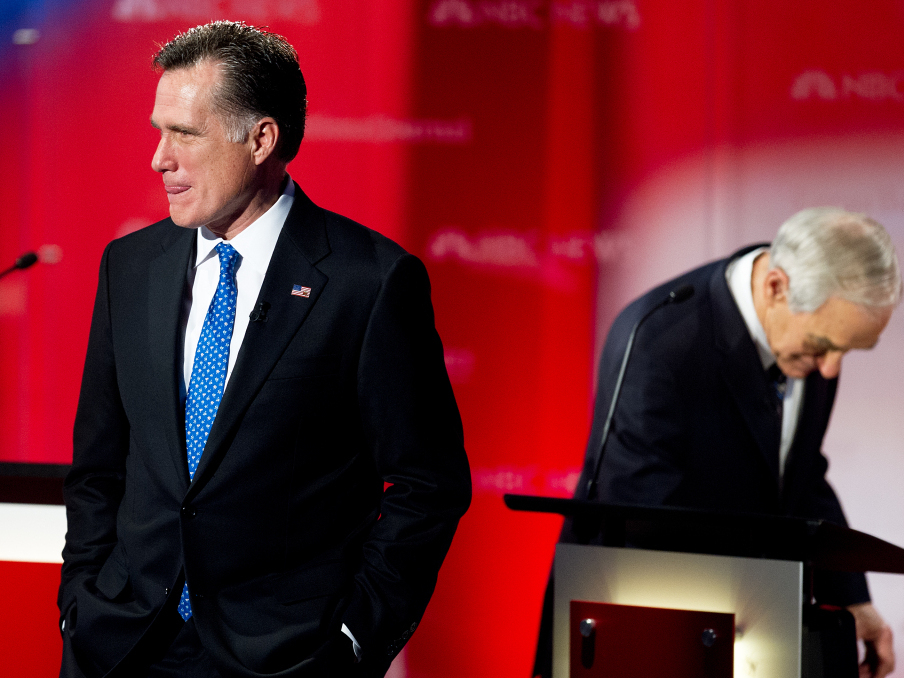 Mitt Romney stands on the stage during a commercial break as Republican presidential hopefuls take the stage for the Debate at the University of South Florida, Jan. 23, 2012, Tampa, Florida. Romney has suffered under attacks about his time at Bain Capital.

Jonathan V. Last is a writer for The Weekly Standard.

During one of his lesser moments in South Carolina, Mitt Romney insisted he would never apologize for his success, "success" being his preferred euphemism for titanic wealth. Surely, he's right. He should no more apologize for being wealthy than we should want him to do so. To a greater degree than most of the world, America does not demonize its millionaires—we celebrate them. And this attitude is part of what makes us exceptional.

But Romney may misunderstand the reluctance of some Republican voters to warm to him. It seems plausible that people who have yet to fully embrace his candidacy may hang back in part because they harbor questions about his professional life. It's not that these voters want Romney to turn his toe in the dirt and say he's sorry for being really, really rich. It's that they're not entirely sure how Romney made his money. It's the same reason voters were anxious to see Romney's tax returns. It's not that Republicans suspect him of being a tax cheat. It's that aspects of a man's financial life can be perfectly above-board, yet also instructive in ways that may or may not be conducive to political success.

For instance, while attempting to explain his tax situation before he released his returns, Romney mentioned that he's taxed mostly at the 15 percent rate because the lion's share of his income is derived from investments. His earned income, he said, came largely from paid speeches, and was "not very much."

It turns out that Romney's speaking fees for the prior year were $374,327. One needn't be envious of Romney's success in the paid-speech world to be curious about who was hiring him to lecture, and what they paid.

For instance, in April 2010, Romney gave a speech at Claremont McKenna College, one of America's great undergraduate institutions. The only item of interest is that Romney accepted payment from them: an $11,475 honorarium. There's nothing wrong with Romney accepting such payment from a non-profit institution, and it was clearly a bargain rate when compared with some of his other gigs. But it makes you wonder why he didn't do it for free. He also accepted payment from the non-profit Quest Educational Foundation. Quest provides tutoring and mentoring to high-school students in Florida and Romney spoke at their annual fundraiser (Gingrich was a speaker at the 1999 event) for a $35,771 fee.

His other engagements were more clearly for-profit. On June 9, 2010, Romney was part of a "Get Motivated Seminar" in Utah. The Get Motivated program tours the country packing arenas with big-name motivational speakers—Zig Ziglar, Brett Favre, Colin Powell, and the like. (Sarah Palin spoke at the Utah event.) It's a quasi-Christian self-help operation and the company makes money both from ticket sales and by letting pitchmen hawk personal improvement and get-rich-quick products during the interludes between the star speakers.

It's not a disreputable program, exactly, but it tends to be the type of work that people do once they've retired from active politics and moved on to the cash-in phase of their careers. Romney was paid $29,750 by Get Motivated, which isn't much by the standards of the genre. But then, Romney didn't actually have to show up at the arena—he gave his speech via satellite link.

He does seem to have shown up to speak for Clark Consulting. Clark is a boutique operation: They consult for large financial institutions who are evaluating their business-owned life insurance programs. For this engagement, Romney was paid $66,000. The oddness of this booking was mirrored in two other speeches he gave. One was to Goldentree Asset Management, a New York hedge fund (they paid $68,000); the other was Barclay's Wealth, an American division of Barclay's Bank which does financial planning for high net-worth individuals and institutions (they paid $42,500).

It's not immediately obvious what a man actively campaigning for the presidency would have to say to any of these groups. Though it is easy to see why they would want to get in a room with him. None of it is improper, of course. Just unusual for a man worth $250 million who is presumably not in need of a spare $60,000.

Then there's the lingering issue of Bain Capital. Romney's response to criticism of his tenure at Bain has been to conflate his former company with capitalism itself and insist that any criticism of one is an attack on the other. That's not quite fair to capitalism but, in Romney's defense, many of the attacks on Bain haven't been fair either.

Continued At The Weekly Standard