Accessibility links
The Nation: Why Attack 'Vulture Capitalism'? Republicans have attacked Romney for being a vulture capitalist. While these attacks have been going on, William Greider of The Nationargues that the trade issue is at the core of U.S. economic deterioration, yet it is the great silence in the 2012 campaign.

The Nation: Why Attack 'Vulture Capitalism'?

The Nation: Why Attack 'Vulture Capitalism'? 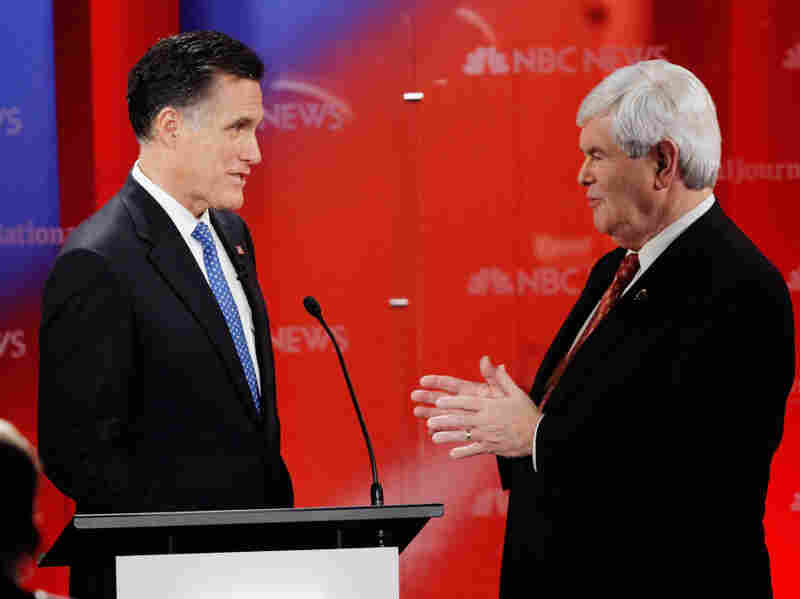 Republican presidential candidates Mitt Romney and Newt Gingrich talk during a commercial break as they participate at the debate held on Jan. 23, 2012 in Tampa, Florida. Republicans have made vigorous attacks on Romney's time at Bain Capital. Chip Somodevilla/Getty Images hide caption 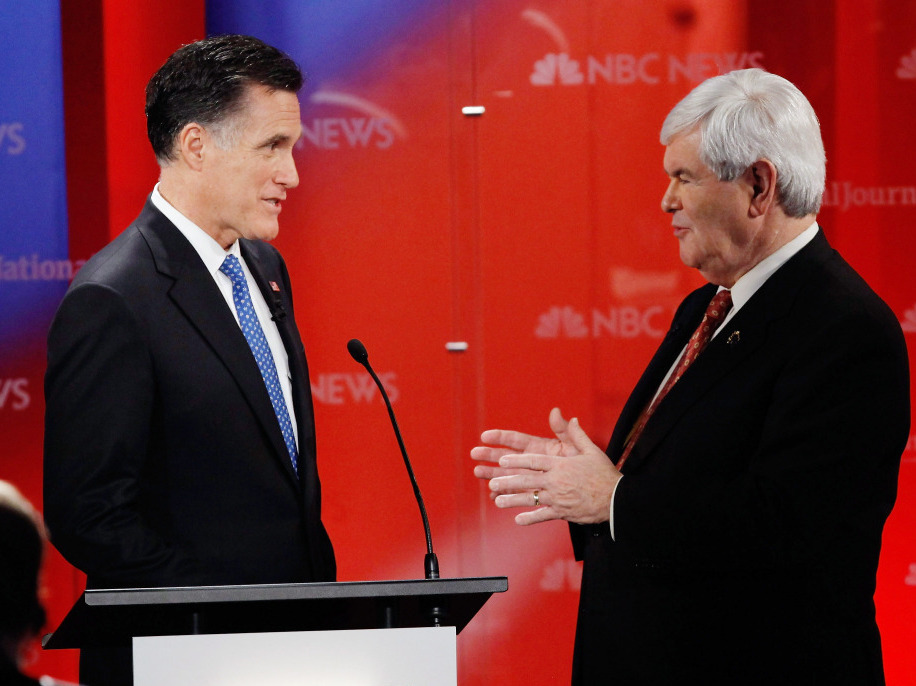 Republican presidential candidates Mitt Romney and Newt Gingrich talk during a commercial break as they participate at the debate held on Jan. 23, 2012 in Tampa, Florida. Republicans have made vigorous attacks on Romney's time at Bain Capital.

William Greider is a political journalist and author.

The anti-capitalist rhetoric of certain Republican candidates sounds like it was ripped from the pages of The Nation. Rick Perry's lurid description of "vulture capitalism" could have been cribbed from Alexander Cockburn or any number of other lefty writers. Newt Gingrich, likewise, denounces "crony capitalism" and asks, "Is capitalism really about the ability of a handful of rich people to manipulate the lives of thousands of people and then walk off with the money?" Right on, the left shouts. Newt sounds like one of those liberal professors poisoning young minds at elite universities.

The opportunistic cross-dressing by conservatives amounts to a battlefield conversion. Just as it's said there are no atheists in a foxhole, there are no candidates in this year's politics witless enough to stand up and defend the most bloodthirsty tactics of rapacious capitalism. Except one. Mitt Romney, the man the GOP will likely nominate for president. He is the "vulture capitalist" Rick Perry has in mind. Rivals cannot resist attacking Romney's very profitable years running Bain Capital, a private-equity giant that specializes in creative destruction, eliminating jobs and sometimes whole companies to reward investors.

Romney awkwardly tries to explain why firing people can be good for the country. A hard sell, when so many people have been on the receiving end. Barack Obama will no doubt remind voters this fall that whatever anger they feel toward him, Republicans are running a "vulture" for president. How bizarre our politics have become. An Obama-Romney contest might determine which one gets tagged as the Herbert Hoover of this Great Recession.

The opportunism could have serious meaning because it reflects a deeper confusion of purpose and an insecurity in the Republican Party (Democrats have their own confusion, but that's another story). Republicans have worked themselves into an ideological dead end that is untenable as a governing strategy. Reviving hard-nosed laissez-faire doctrine appeals to hard-core right-wingers but says nothing relevant about healing the economy or halting the steady disintegration of the broad middle class.

Some conservative thinkers seem to recognize this. They are floundering in search of alternative thinking, beginning to acknowledge economic and social realities the right has long ignored, even denied (economic injuries the left has addressed for decades). Just as candidate Newt condemns "crony capitalism" and Perry denounces "vultures," historian Francis Fukuyama has abruptly rescinded the happy talk that made him famous twenty years ago. At the end of the cold war, Fukuyama's book The End of History and the Last Man declared that left-right ideological conflicts were over. Liberal democracy had won. It would henceforth prevail around the world.

Hold that prophecy. The professor has issued a sort of retraction (he might say "correction"). His essay in the latest issue of Foreign Affairs, the journal of the Council on Foreign Relations, explained that "some very troubling economic and social trends, if they continue, will both threaten the stability of contemporary liberal democracies and dethrone democratic ideology as it is now understood."

Yikes. What trends are those? Global capitalism, he said. Free-trade doctrine and new technology, along with the steady offloading of American jobs, are destroying the middle class — the necessary foundation for democracy in advanced economies. "What if the further development of technology and globalization undermines the middle class and makes it impossible for more than a minority of citizens in an advanced society to achieve middle-class status?" Fukuyama asked.

His alarming observations were picked up by other conservative commentators and treated respectfully, a sign that these anxieties are widely shared.Washington Post columnist David Ignatius, longstanding advocate of globalization, embraced Fukuyama's argument. New York Times columnist David Brooks wrote with sympathy for the struggling white working class. It votes Republican and gets hammered by corporate capitalists in return.

Fukuyama treats this threat to the middle class as a newly discovered insight, but of course, it is precisely what organized labor and liberal-left critics have been saying for about thirty years. Fukuyama's warning reminded me of a disturbing article by Robert Kuttner I read in 1983 in The Atlantic, "The Declining Middle." Fukuyama's explanation of the economic forces echoes the book I published in 1997, One World, Ready or Not: The Manic Logic of Global Capitalism. Alas, the Stanford historian lacked the grace to acknowledge that he was catching up with the liberal left, essentially confirming our critique. If Fukuyama said so, he would lose membership in the Conservative Thinkers Club.

Nevertheless, I salute Fukuyama for putting some hard truths on the table. His essay will help other conservatives get over the tired bromides about free trade and see through the false claims promoted by the multinationals. The trade issue is at the core of US economic deterioration, yet it is the great silence in the 2012 campaign. It will keep chewing up the American middle class until one party or the other finds the courage to do something about it.