Accessibility links
It's At The 20! The 10! Can The Flu Go All The Way? Football season is drawing to a close, and baseball has yet to begin, but fantasy sports are so popular, they keep the thrill of competition alive all year. Commentator Laura Lorson has a fantasy league, too — but it's not the type of competition you might expect. 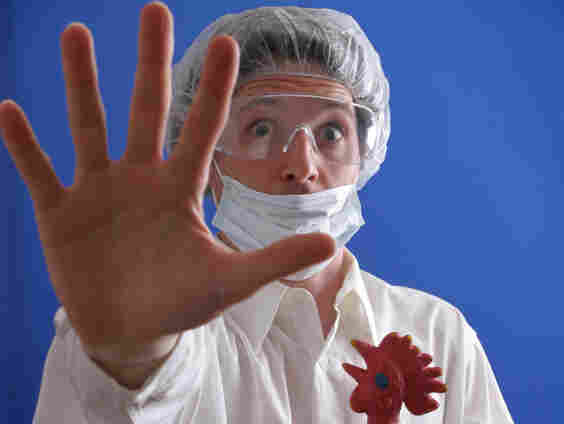 Yes, H1N1 has been known to cause panic. But commentator Laura Lorson isn't afraid. With this powerful player, her fantasy flu team will be nearly unstoppable. iStockphoto.com hide caption 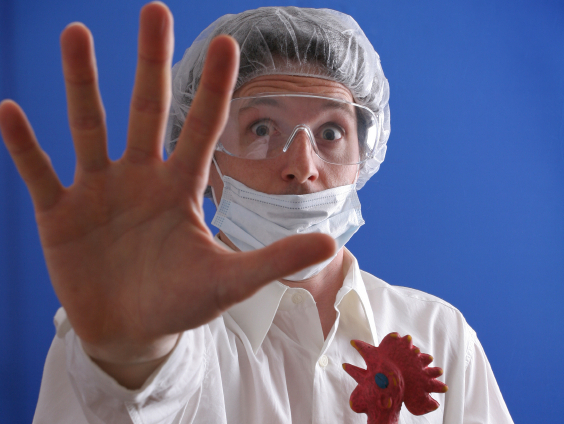 Yes, H1N1 has been known to cause panic. But commentator Laura Lorson isn't afraid. With this powerful player, her fantasy flu team will be nearly unstoppable.

Laura Lorson is an All Things Considered host for Kansas Public Radio as well as a director, producer and editor.

Another football season is winding down, college basketball is uninteresting until the tournament, pro basketball is rather dull. It will be a while before pitchers and catchers show up for spring training. But fortunately for all of us, we are smack in the middle of cold and flu season.

The action in my Cold and Flu Fantasy League is really heating up. I pore over issues of the CDC's Morbidity and Mortality Weekly Report like it's a racing form. I'm trolling the Internet for hints on what the up-and-comer viruses might be from the Journal of the American Medical Association and the New England Journal of Medicine. Everybody knows about WebMD, which has undeniably solid information and background, but my secret weapon in drafting the real sleeper virus picks? Telehealth Ontario. The Canadians rarely steer you wrong.

But everybody knows about coronavirus. What you really want to look for is the performer the fair-weather fans haven't necessarily heard of, maybe has kind of mediocre jersey sales, but is supercontagious, and hard to stop.

Last year, I pinned a lot of my strategy on rotavirus, which totally fit that profile. I have a friend who works in a day care center and she gave me the tip. I also went ahead and drafted listeria because I had heard someplace that USDA funding was under attack. Kind of a mediocre pick, actually. My co-worker who drafted E. coli totally cleaned up, but then, he had a higher salary cap than I did.

I'm not having a great season, but it ain't over 'til it's over. The weather could get worse; more people could be staying indoors, sneezing on each other. I got stuck with diphtheria in a really boneheaded trade I made earlier this year, but I had a hunch a few weeks ago and picked up pertussis on waivers since the two kind of go together, what with all these people refusing to get their kids immunized.

I also have kind of a big stake in flu, which is always risky; it's feast or famine with flu. It either has a monster season or it's a total bust. I drafted A (H1N1), which historically has had absolutely mind-blowing statistics, but I haven't started him this year. Good to know he's on the bench, though. When the virus strain that started the 1918 pandemic takes the field, people sit up and take notice. At least, people at the CDC do.

Anyway, if you could do me a favor, I'd really appreciate it if you could be a little more lax about hand-washing here in the next couple of weeks. If I'm gonna win this league, I'm gonna need your help. So go to work with your sniffles and your productive cough. Your boss and your co-workers will think you're really dedicated, and I could use the points.

Winning this year's Cold and Flu Fantasy League may not have the cachet of winning at fantasy football or Rotisserie League Baseball, but it would really be a confidence booster for this coming spring, when I'm getting my Westminster Kennel Club Dog Show bracket picks together during Mutt Madness.