Accessibility links
Obama Outlines Vision, Declaring 'America Is Back' The economy was the main focus of the president's State of the Union address. Obama offered specific proposals for boosting manufacturing and creating more jobs. He also laid out an optimistic vision of the nation's role in the world. In the GOP response, Indiana Gov. Mitch Daniels said Obama had made the economy worse. 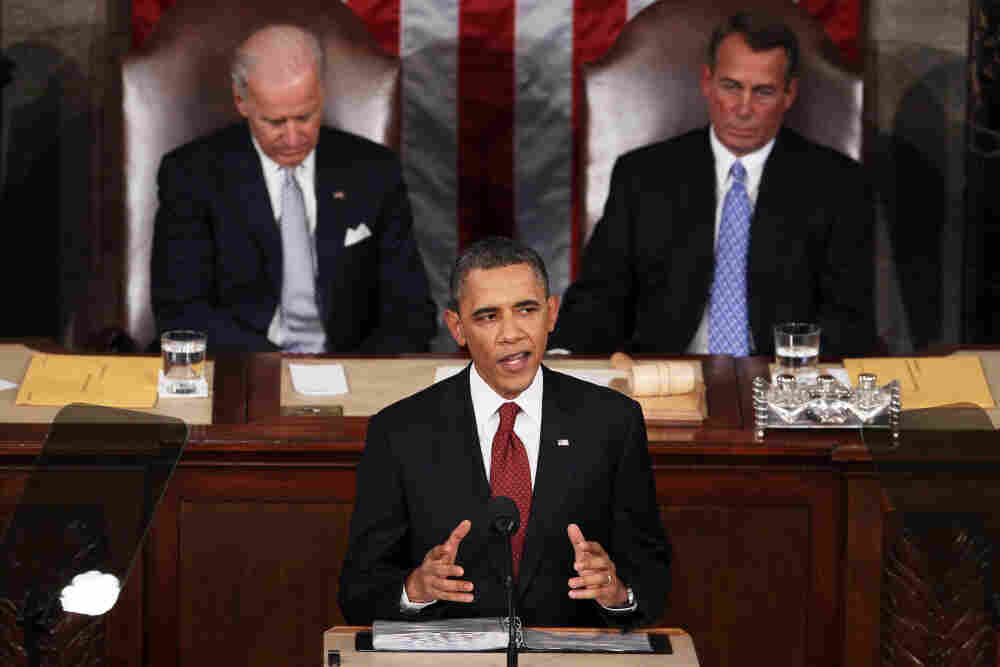 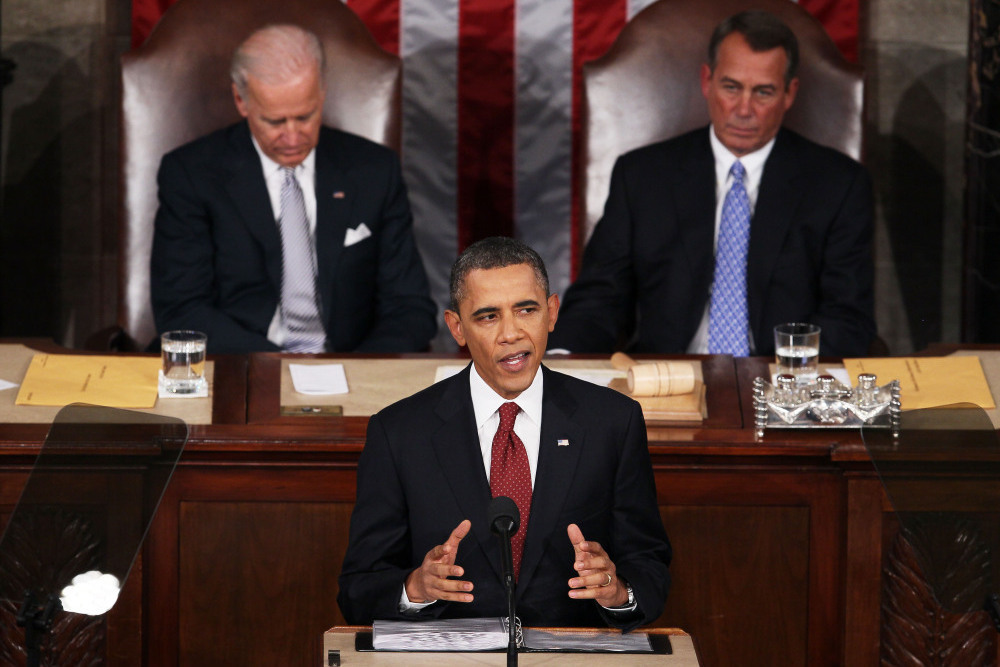 President Obama, flanked by Vice President Biden and Speaker of the House John Boehner, delivers his State of the Union speech Tuesday in Washington.

President Obama has been talking in recent weeks about the need to bolster the middle class. With his third State of the Union address Tuesday, he began outlining the policies he believes are necessary to make "an economy that's built to last."

In his address to Congress and the nation, Obama outlined several systemic changes to the economy and the tax code. He intends to tax the top earners more heavily, offer tax breaks to businesses that create jobs within the U.S. and improve training and education for American workers.

"We can either settle for a country where a shrinking number of people do really well, while a growing number of Americans barely get by," he said, "or we can restore an economy where everyone gets a fair shot, everyone does their fair share, and everyone plays by the same set of rules."

Obama opened his address with a reference to his welcoming home some of the last U.S. troops from Iraq. He also mentioned his administration's success in hunting down Osama bin Laden and other members of the terrorist group al-Qaida.

But the president devoted the bulk of his address to economic matters.

Obama, who said that the state of the union is "getting stronger," pointed out that job creation is now approaching pre-recession levels, with 3 million jobs created over the past 22 months.

He noted the success enjoyed by American carmakers General Motors and Chrysler since they were bailed out and restructured by the federal government.

Obama pledged to encourage U.S. manufacturing through changes to the tax code. He proposed blocking tax breaks for companies that send jobs overseas, while calling for all multinational companies to pay "a basic minimum tax."

"No, we will not go back to an economy weakened by outsourcing, bad debt and phony financial profits," Obama said.

Obama put an emphasis on steamlining worker training programs and said that higher education had to be made more affordable, calling it "an economic imperative."

Obama singled out as an example Jackie Bray, a North Carolina woman who sat during the speech to the immediate right of first lady Michelle Obama. After having been laid off as a mechanic, Bray was trained to work at a gas turbine factory thanks to a partnership between its operator and a local community college.

Obama called on Congress to block interest rates on student loans from doubling this summer and wants to create economic penalties for colleges and universities that allow tuition increases to get out of hand.

"You see, an economy built to last is one where we encourage the talent and ingenuity of every person in this country," he said.

The president touted his record on fossil-fuel production, seeking to stave off criticism from his decision last week to block a permit for an oil pipeline from Canada. Obama has already noted in campaign advertising that America now relies on foreign sources for just under 50 percent of its energy needs for the first time in 13 years.

He noted the country's spike in natural gas production. But some Republicans and energy industry officials say that Obama is taking credit for successes that were not of his own making, since his administration has been comparatively stingy about allowing new permits for drilling on public lands and offshore.

Obama called for further development of natural gas, but also renewed his call for investments in clean energy sources.

A Face For The Buffett Rule

On a day when much of the news was dominated by the release of personal income tax returns by Mitt Romney, a former Massachusetts governor who is seeking the GOP presidential nomination, Obama called again on rich Americans to pay a greater share of taxes.

Among the guests in the first lady's box was Debbie Bosanek, the secretary of billionaire investor Warren Buffett. Buffett has often said it's unfair that he pays a lower effective tax rate on his investments than his secretary, who earns far less in wages.

For the first time, Obama offered a specific number regarding the imposition of a "Buffett rule," calling for wealthy Americans to pay a minimum income tax rate.

Those making more than $1 million a year should not pay less than 30 percent in taxes, Obama said. But he pledged to keep tax rates constant for American households earning less than $250,000 annually.

Bosanek nodded as the president said, "Asking a billionaire to pay at least as much as his secretary in taxes — most Americans would call that common sense."

The president also called for tighter regulations of financial institutions, saying he would direct Attorney General Eric Holder to work with his state-level counterparts to create a special unit of prosecutors to look into abusive lending practices.

Obama devoted the bulk of his remarks to energy and the economy, but he did address major changes seen around the globe this past year.

He described the "wave of change" across the Arab world, noting in particular the ouster and death of longtime Libyan leader Moammar Gadhafi. He expressed his belief that Syrian President Bashar Assad will also soon be driven from power, but offered no specifics about what the U.S. might do to achieve such an outcome.

Obama also reiterated his determination to keep Iran from building nuclear weapons. Despite recent saber-rattling between the countries, Obama said that a "peaceful resolution" is still possible.

In addition to offering what he framed as positive remarks about Iraq and al-Qaida, the president said, "We've begun to wind down the war in Afghanistan."

In the official GOP response, Indiana Gov. Mitch Daniels said that while Obama was not responsible for the recession, he has failed to make the economy better.

"He cannot claim that the last three years have made things anything but worse: the percentage of Americans with a job is at the lowest in decades," Daniels said.

Echoing complaints raised by other Republicans throughout the day, Daniels said that Obama's agenda relies on excessive government spending. Daniels said the federal debt has to be curbed, in part by reining in entitlements.

Raising tax rates on the wealthy, he said, would choke off growth.

"It's not fair and it's not true for the president to attack Republicans in Congress as obstacles on these questions," Daniels said. "They and they alone have passed bills to reduce borrowing, reform entitlements, and encourage new job creation, only to be shot down time and time again by the president and his Democratic Senate allies."

Obama: Not Backing Down

Still, Obama signaled that he would not back down from further fights with Republicans in Congress. Over the next three days, he will be repeating his economic themes on a tour of several states — Iowa, Arizona and Nevada — that are likely to be battlegrounds this fall.

"I intend to fight obstruction with action," he said, "and I will oppose any effort to return to the very same policies that brought on this economic crisis in the first place."

The mere fact that Republicans are responding to Obama's ideas, however, showcases the importance of the State of the Union in helping Obama shape the political agenda. Thus far this year, more attention has been devoted to the GOP primary process.

"This gives him the public forum, the attention that has been so focused on the Republicans vying for the nomination this year," says presidential historian Robert Dallek. "This gives Obama the chance to come back onto center stage."