Accessibility links
Shoe Company Practices Insourcing For The Sole In his State of the Union address, President Obama talked about bringing jobs back to the U.S. Oregon shoe maker Keen is doing its part. The company opened its first American factory in 2010, and while it still produces most of its shoes in Asia, Keen's CEO says manufacturing in the U.S. has been a "giant leap" for the company. 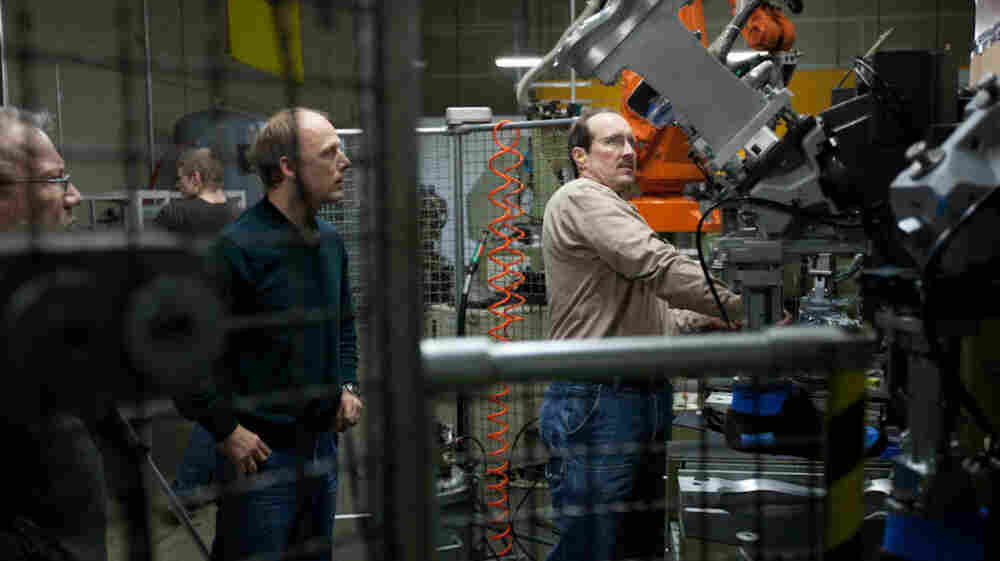 The American economy lost more than 5,000 jobs to offshore outsourcing in 2010, and in Tuesday's State of the Union address President Obama made it clear that he wants them back.

The Markup: Notes On The State Of The Union

"We can't bring every job back that's left our shores," he said. "But right now, it's getting more expensive to do business in places like China. Meanwhile, America is more productive."

James Curleigh, CEO of the Portland, Ore.-based footwear company Keen, knows exactly what Obama is talking about. In 2010, Curleigh opened a workboot factory in Portland; today it employs 30 people. Keen still produces most of its shoes in Asia, but Curleigh says starting to manufacture in the U.S. was a big step.

Curleigh tells NPR's Robert Siegel that duty rates, transportation costs, intellectual property and development costs all played a role in deciding to open a plant in the U.S. rather than using a plant in China. He says that if you look at just the money, the move makes sense. But there were also other factors to consider.

According to the Bureau of Labor Statistics, approximately 27,000 American jobs were lost to offshore outsourcing from 2008 to 2010. Now, the White House is leading an effort to promote insourcing, which it defines as companies acting to keep jobs in the U.S. or bring jobs back from overseas.

Some of the companies the White House has recognized for insourcing include:

Ford: Last year, Ford announced its commitment to adding 12,000 manufacturing jobs by 2015, some of which will be insourced from Mexico, China and Japan.

Master Lock: Over the past 18 months, Master Lock moved about 100 jobs from offshore locations back to its Milwaukee factory.

"The broader picture is looking at the dynamics of what's happening over in Asia and other parts of the world where we see labor rates increasing at a significant rate," Curleigh says. "We also see vertical integration of our factories being closer-linked to commodities and materials."

"When you think about a category of steel-toe, you think about built in America, you think about Americans building things," he says. "By building a factory here in Portland, Ore., we were able to say we completely understand labor dynamics, overhead dynamics, the shift from manual to automation. And as a result ... when we speak to our other sourcing partners, we're much more educated to be able to make better decisions in the interest of cost reduction and quality improvement."

It's a change Curleigh believes Keen fans will appreciate. Part of the company's ethos is, after all, to care for the world around it.

"Just the fact that we have an effort ... that creates product in America I think is important," Curleigh says. "It's the classic 'One small step for insourcing in America and one giant leap for Keen.' "