Accessibility links
Irene's Floods Dry Up Business In Vermont Town Life in the small town of Waterbury, Vt., changed dramatically after Tropical Storm Irene. With a state office complex flooded, 1,500 workers were relocated. The exodus slowed business to a trickle for those who remain. 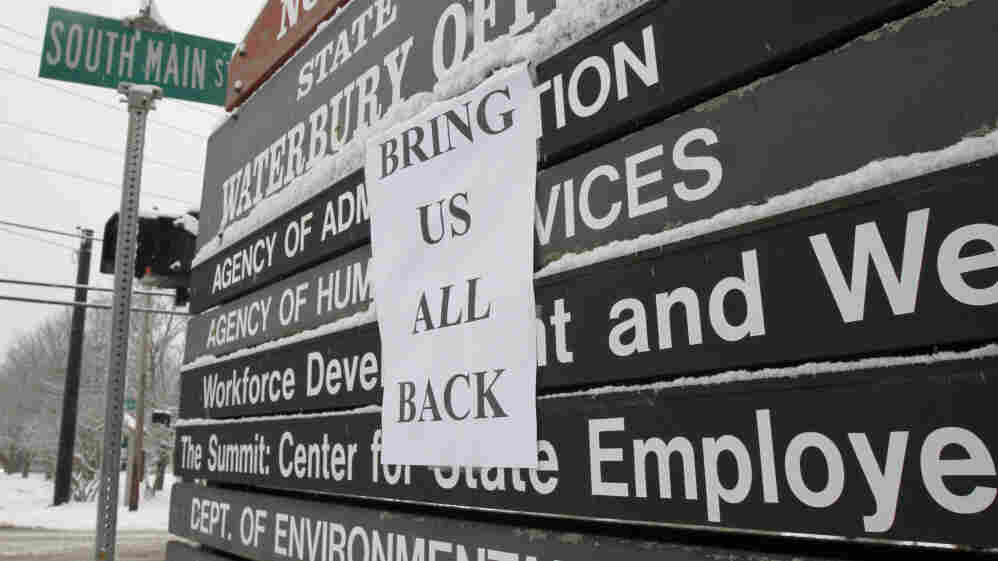 A sign is posted at the entrance to the state office complex on in Waterbury, Vt., About 1,500 people who worked in the complex were relocated due to damage caused by Tropical Storm Irene. Toby Talbot/AP hide caption

When Waterbury, Vt., got walloped by the remnants of Hurricane Irene, the small town sustained an estimated $9 million in damages to personal property, and countless millions more in lost business revenue. Five months later, the waters have receded, but Waterbury's future remains uncertain.

On Main Street, a church bell still chimes every day, but daily life in Waterbury hasn't been the same since Irene.

"It's palpable," says Bill Shepeluk, Waterbury's municipal manager. "You can sense that it's not as vibrant as it was."

He says about 200 properties in the town were hit by flooding — nearly a third of its homes and businesses. But for residents, that's not the worst of it.

For decades, 1,500 employees worked at the sprawling state office complex along one end of Main Street. Irene's floodwaters inundated all 49 of the century-old red brick buildings. All but one of them was rendered uninhabitable.

That meant almost all of those workers had to go to temporary offices elsewhere. They still haven't returned.

Shepeluk says the town felt the loss immediately. The 1,500 people who were once in and out of restaurants, grocery stores and dry cleaners are now gone.

"You know, every job has a multiplier, so every dollar of payroll maybe translates into $7 or $8 or $12, and that dollar just gets circulated through a community," he says.

More than half of Albert Caron's customers were state workers. His auto repair shop is just a block from the state office complex, and work has dropped off dramatically.

"I have nothing scheduled for next week, week after," Caron says. "Near lunchtime, usually I can probably figure out anywhere between eight and 10 walk-ins. Now, I get one if I'm lucky."

The irony of Waterbury's situation is that the town was in tough straights 30 years ago, when the state mental hospital occupied the buildings that have since been converted to the office complex.

It was that transformation — from state hospital to state offices — that triggered the town's renaissance.

At Waterbury's winter farmers market, Mark Hall says residents in this close-knit community have been trying to support village businesses.

"The community is great," Hall says. "I mean, we do everything we can, but there's not enough of us to keep it going the way it was going before the flood."

The state has been studying whether it's financially feasible to renovate some of the aging buildings at the Waterbury complex so workers can return.

The question now is: How long can the village wait?

While many businesses struggle to hang on, people in town are fighting back. They've created ReBuild Waterbury, a nonprofit to help push along the recovery process.

"People are really, I think, committed to the community," says Amy Hoskins, who volunteers at the farmers market.

She says that before Irene, the town was just hitting its stride, with the addition of things like a wine bar and a performing arts studio.

"It had become sort of a more thriving, lively place in the last few years," she says. "And to have Irene hit us when it did has really set us back."

Like many others in town, Hoskins is hopeful that Waterbury's resilience will carry it through this new challenge. Shepeluk, the municipal manager, sees it as a challenge the town will rise to.

"The old adage is you have to adapt, or you die," he says. "And we're in a position where we have to accept there's going to be change."

Meanwhile, the town looks ahead to March. That's when the state government expects to make decisions about whether any state workers can return to Waterbury — and when.