Accessibility links
Can Sanctions Alone Get Iran To Negotiate? In an effort to bring Iran to the negotiating table over its nuclear program through economic pain, both the U.S. and the European Union have imposed sanctions that should make it harder for Iran to sell its oil. Supporters of the sanctions have devised complex statistical models to show how they can be effective without disrupting the global economy. 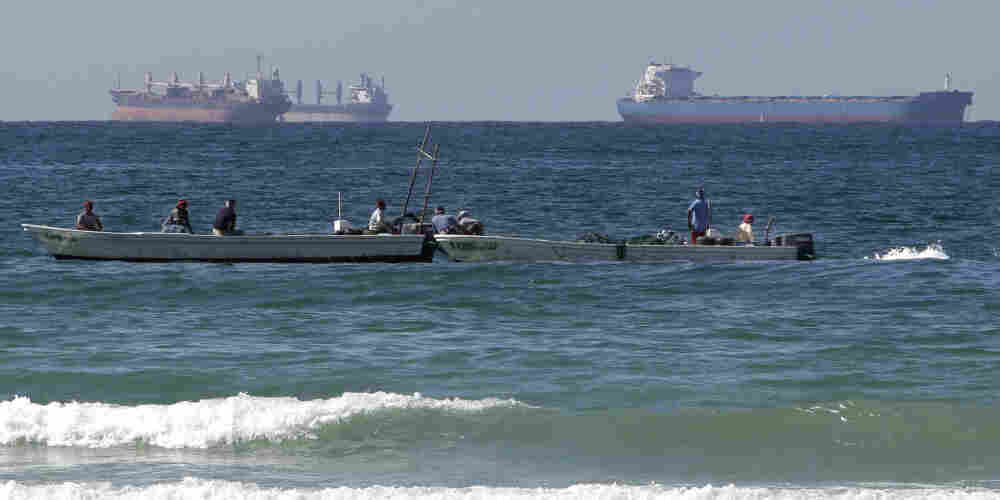 Fishing boats are seen in front of oil tankers on the Persian Gulf waters, south of the Strait of Hormuz. The European Union has announced plans to join U.S. efforts to slow the flow of oil from Iran, the world's third largest exporter. Kamran Jebreili/AP hide caption

In an effort to bring Iran to the negotiating table over its nuclear program through economic pain, both the U.S. and the European Union have imposed sanctions that should make it harder for Iran to sell its oil. But the global oil business is unpredictable, and sanctions are no guarantee.

One problem is that sanctions don't always work as intended. If the U.S. and Europe don't buy Iran's oil, but other countries pick up the slack, for example, nothing is accomplished. Or if some Iranian oil is taken off the market but the price goes up, Iran could earn just as much from its oil even though it is selling less.

But sanction supporters have devised complex statistical models to show how the sanctions can be effective without disrupting the global economy.

Mark Dubowitz runs the Iran Energy Project at the Foundation for the Defense of Democracies. His organization supports the Iran sanctions and has an international team of researchers, mathematicians and economists working to show how the sanctions can do exactly what they're meant to do.

"We've identified Iran's major oil purchases, how much they're buying in thousands of barrels a day, [and] we look at how much oil revenue each country is contributing to Iran," Dubowitz says. "Then we run scenarios based on a certain change in output."

Dubowitz and his team are assuming that over the next six months, as the sanctions take effect, the European Union countries will cut their purchase of Iranian oil by 80 percent — not 100 percent, as some will still leak through. They also assume India, Japan and South Korea — big consumers of Iranian oil — will cut back their purchases from Iran.

Are Those Assumptions Realistic?

India's foreign minister says his country will not abide by the U.S. and EU sanctions. But Dubowitz and his team say it's more important to look at what Indian refinery operators do on their own, especially since U.S. sanctions would punish foreign companies that buy Iran's oil.

"A number of the refiners have significant U.S. interests and assets," he says. "We believe that a number of Indian refineries are going to make an independent decision to comply with U.S. sanctions because they don't want to risk getting sanctioned and cut off from the U.S. market."

As for Japan and South Korea, Dubowitz thinks those governments will want to protect their companies from U.S. sanctions. He says they do not want to get into a fight with Congress during election season.

"They are absolutely paranoid at the prospects of Japanese and South Korean companies ending up on somebody's 'name and shame' list," he says.

To be spared that embarrassment, Japan and South Korea are likely to reduce their Iranian oil purchases by 15 percent, according to this model. That's enough to show they're at least making an effort.

So, from Europe to Asia, those are where the cuts occur.

China, on the other hand, is projected to increase its purchasing of Iranian oil.

In all, by this team's calculation, Iran will see a net loss of about 500,000 barrels a day because of sanctions. That alone would cost Iran money.

But Iran might be hurt in another way. With other countries cutting back on their imports, the countries that buy more oil, notably China, could insist that Iran sell to them below market price.

In this case, Dubowitz and his team predict China will be able to negotiate about a 15 percent discount.

Between the loss of some exports and the need to accept a lower price, Iran, under this model, could lose $20 billion a year — quite a blow for an already weak economy.

NPR ran these projections by some global energy consultants. In general, they agreed that Iranian oil exports are likely to decrease, though perhaps not as much as Dubowitz's Iran Energy Project is predicting.

The other consultants also foresaw limited damage to the global economy. Whether the Iranians will be forced to offer steep discounts on their oil, however, is not so clear.

"We don't see a huge discounting occur," says Jamie Webster, a Middle East oil analyst at PFC Energy. "Now the amount we've seen in the past ... that may rise, but I still don't see it as being a huge amount that it's going to impact their revenue significantly enough that it's really going to put them in a bad spot."

Of course, even if Iran is put in a bad spot, whether that would be enough to drive its leaders to the nuclear negotiating table is another question entirely.