Accessibility links
The Nation: Tahrir One Year Later Ahmed Harara, who lost his second eye while protesting the military junta that holds significant power in Egypt, has become a symbol of a fight against Egypt's Supreme Council of the Armed Forces. Sharif Abdel Kouddous of The Nation notes that Egyptians are frustrated with their government.

The Nation: Tahrir One Year Later

The Nation: Tahrir One Year Later 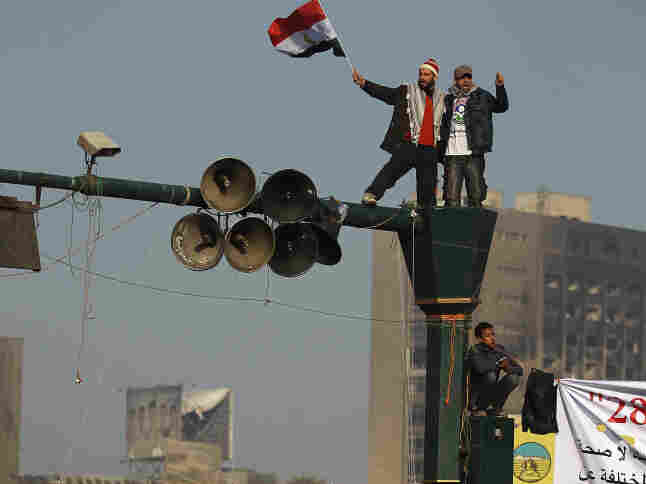 Egyptians gather in Tahrir Square to mark the one year anniversary of the revolution on Jan. 25, 2012 in Cairo Egypt. For many Egyptians the fight is still not yet over. Jeff J Mitchell/Getty Images hide caption 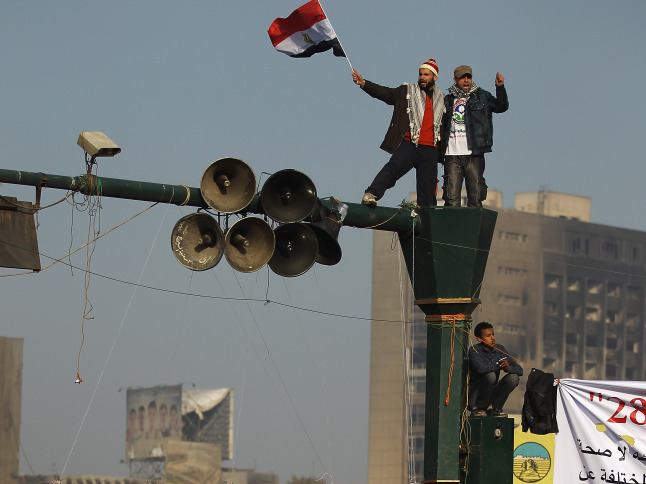 Egyptians gather in Tahrir Square to mark the one year anniversary of the revolution on Jan. 25, 2012 in Cairo Egypt. For many Egyptians the fight is still not yet over.

Read More On The Anniversary Of The Arab Spring In Egypt

Sharif Abdel Kouddous is an independent journalist based in Cairo. He is a Democracy Now! correspondent and a fellow at The Nation Institute.

On Nov. 19, Ahmed Harara, a 31-year-old activist who lost his right eye during the uprising against Egyptian President Hosni Mubarak, lost his left eye while protesting the military junta that replaced him: the Supreme Council of the Armed Forces (SCAF). Blind, Harara has become a hero of the revolution — and a symbol of a fight that has evolved from eighteen heady days in Cairo's Tahrir Square to a protracted struggle against Egypt's central power structure, the backbone of its modern autocracy. "Our demand," said Harara in a televised interview, "is that the military council leaves."

One year after the fall of Mubarak, the force that was once praised as "the protector of the revolution" has seen a plummeting of popular legitimacy, with Egyptians angered by the SCAF's impromptu, opaque decision-making, its increasingly brutal tactics and its apparent unwillingness to cede power. Since taking charge of the country, the SCAF has worked to ensure that in any government handover to a civilian authority, it will preserve its own political and economic autonomy and maintain its de facto status as a state within the state. In short: to stop governing Egypt and go back to simply ruling it.

The violence that led to the blinding of Harara was sparked in early November, when Deputy Prime Minister Ali El Selmi proposed a set of "constitutional principles" ahead of Egypt's parliamentary elections. The Selmi Document, as it became known, gave the SCAF extraordinary powers to intervene in the constitution-writing process, which is tentatively scheduled for completion by May 15 (an impossibly short time, according to many observers). These include the authority to appoint eighty of 100 members of the constituent assembly charged with drafting it, the right to object to certain provisions and the power to appoint an entirely new assembly if a constitution is not drawn up within six months. It also stipulates that the military's budget remain secret and gives the SCAF exclusive authority to approve any legislation on the army's internal affairs.

The document caused an uproar, prompting the Muslim Brotherhood, backed by a wide range of parties and activists, to call for a massive protest in Tahrir Square. The demonstration, on November 18, marked a public break by the Muslim Brotherhood from the ruling generals it had thus far cozied up to — an important challenge to the SCAF. But its significance was eclipsed by what happened the next morning when the Central Security Forces, the notorious black-clad riot police used for years by Mubarak, stormed Tahrir to attack a few dozen protesters. Thousands of people descended on the square in solidarity. Downtown Cairo was transformed into a battle zone, the air saturated by a white fog of tear gas. At least forty-two people were killed and more than 3,000 wounded over five days of clashes.

The crackdown was one of the most violent episodes in a year that has seen what Heba Morayef of Human Rights Watch describes as "new patterns of violations and an attempt to control the political space." The military and security forces have engaged in vicious regular assaults on protesters, using live ammunition, rubber bullets, birdshot and astonishing amounts of tear gas. In the most shocking display, the military fired live ammunition into a protest of Coptic Christians and their supporters in October and drove armored personnel carriers at high speeds into the crowd. At least twenty-seven people were killed and about 300 wounded in the single bloodiest day in Egypt since Mubarak's ouster.

Nearly ninety people have been killed participating in demonstrations in the past three months alone. Protesters under arrest have been severely beaten and sometimes tortured with stun guns. Soldiers have gone so far as to subject several female demonstrators to forced "virginity tests."

"I didn't used to feel scared of protests before the revolution," says Salma Said, a well-known activist who has been participating in protests for years. "But now, after everything that's happened, I am very, very scared. Before, there was this idea that there's some stuff they can't do, like shoot us. They never did in my lifetime. This happens very casually now."

The SCAF has also made twin use of a fully compliant state media apparatus to demonize the protest movement and champion official policy while intensifying a crackdown on press freedoms — assaulting journalists, jailing bloggers and raiding TV stations. It has also targeted civil society, most recently by raiding up to ten local and international NGOs.

In the face of increasing levels of state violence and repression, a sustained protest movement has emerged, continuing its calls for change. "It's turning out to be a much more radical revolution," says Alaa Abd El Fattah, a prominent activist and blogger who was jailed for nearly two months by a military court in October. "People want a change that is more fundamental, and they are expressing that in their actions constantly."

This steady resistance has seen important results. Over the first seven months of SCAF rule, nearly 12,000 civilians were tried in hasty military courts — more than the total number during Mubarak's thirty-year reign. The trials marked "a huge deterioration in terms of due process rights," according to Morayef, and activists and human rights lawyers launched a grassroots campaign that catapulted the issue from the margins of the activist community to the center of the political sphere. Today civilians are rarely referred to military courts, though the practice has not been entirely abolished. Activists have also launched a guerrilla media campaign to counter the SCAF's blanket denials of wanton violence against protesters, setting up portable screens in public spaces across the country to air footage of army abuses.

In the midst of the November unrest, Prime Minister Essam Sharaf, in power since March, resigned, only to be replaced by Kamal al-Ganzouri, a 78-year-old who served as prime minister under Mubarak. Hundreds of protesters marched toward Parliament for an indefinite sit-in. But in Tahrir, the protests were largely defused by the start of parliamentary elections on November 28, held in three rounds and lasting more than six weeks. Nevertheless in December, in the middle of the voting process, the military attacked the sit-in — leading to the first sustained street battle involving army soldiers since the revolution. At least seventeen protesters were killed and hundreds were injured. Scenes of soldiers beating protesters made headlines around the world, including the now iconic image of a young woman being dragged and stomped on, her abaya pulled over her head to expose her stomach and bra.

Today, there are four twelve-foot concrete walls blocking Tahrir Square from Parliament, the cabinet and the interior ministry. Erected by the SCAF to put an end to the clashes, the walls have become an emblem of the military's blunt tactics. "It's very symbolic of the way they try to solve problems," Said says. "The walls are the problem, not the solution."

As parliamentary elections drew to a close in mid-January, the Muslim Brotherhood–led alliance had captured about 45 percent of the seats, while ultraconservative Salafist parties, surprisingly, garnered roughly 25 percent. Liberal parties came in a distant third. The first session of Parliament is scheduled for January 23, two days before the first anniversary of the revolution, and many fear it will be toothless, cutting compromises and allowing the military to return to barracks with its privileges safely enshrined in the new constitution.

"The question is, Will Parliament, the only elected authority we have right now, pick a confrontation with the SCAF?" says Abd El Fattah. "If they choose to remain silent, they will give the military a green light to use even more violence against protesters."

The SCAF says it will hand over authority to civilians after a presidential vote in June, but protesters are demanding they quit power sooner. On January 14 presidential candidate Mohamed ElBaradei, a leading reform advocate and Nobel Peace laureate, announced his withdrawal from the presidential race — a dramatic move protesting the military council's failure to put Egypt on a path to democracy. "We feel the former regime did not fall," ElBaradei said in a statement. "My conscience does not permit me to run for the presidency or any other official position unless it is within a real democracy."

Tens of thousands of protesters are expected to gather in Tahrir on January 25 to commemorate the revolution that reverberated around the world. This time, the chant that will echo throughout the square is one that has become the revolution's new clarion call: "Down with military rule!"