Accessibility links
In The Music Box, New Orleans Residents Hear Hope When Hurricane Katrina hit New Orleans in 2005, it left behind a city full of destroyed homes. Now, artists have reclaimed one of the city's blighted properties in the 9th Ward — and turned it into a work of art and music. 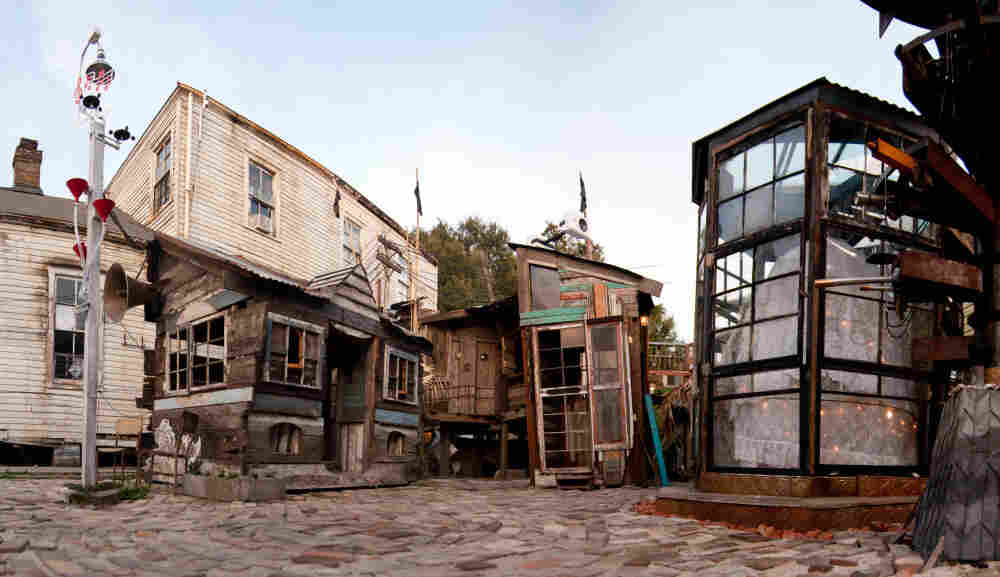 The sound sculptures that make up The Music Box were constructed from the materials of an 18th-century Creole cottage that stood on this site in New Orleans' 9th Ward. Morgan Sasser/New Orleans Airlift hide caption

When Hurricane Katrina hit New Orleans in 2005, it left behind a city full of destroyed homes. Despite ongoing rebuilding efforts, thousands of blighted properties remain. Now, a group of artists is creating a structure that is part home, part musical instrument and part inspiration of what can be made of these damaged properties. 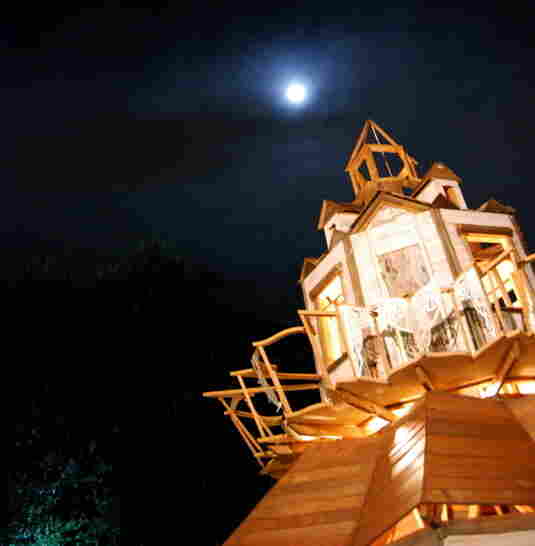 The Control Tower was designed by Brooklyn-based artist Swoon. Residents who are rebuilding their homes and their lives want to do so "joyfully and with imagination," she says. New Orleans Airlift hide caption 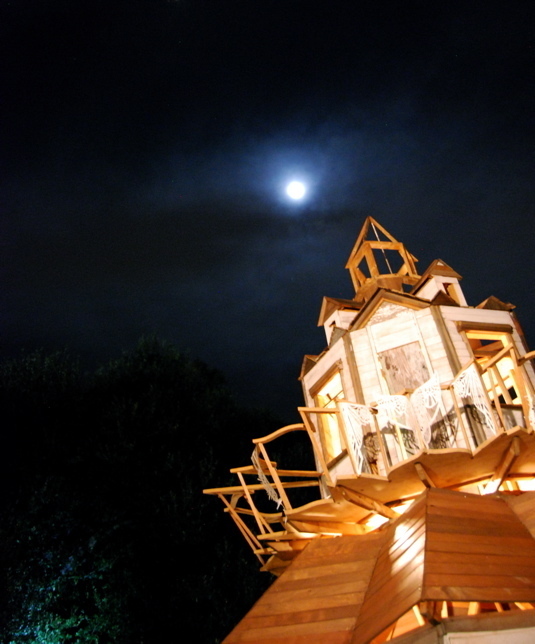 The Control Tower was designed by Brooklyn-based artist Swoon. Residents who are rebuilding their homes and their lives want to do so "joyfully and with imagination," she says.

The Music Box is a small village of ramshackle sculptures huddled together on Piety Street in the Bywater section of the once-flooded 9th Ward. The sculptures are outfitted as musical instruments and are made almost entirely of the remains of the 18th-century Creole cottage that used to sit on this lot.

The Heartbeat House is one of these musical sculptures: It's an A-frame shack with a rotating organ speaker perched on top. The speaker is attached to a stethoscope — which broadcasts the heartbeats of those who stop to engage with the art.

"Unlike a church bell [that] calls people to congregation or an alarm, what we want to have is a heartbeat," explains curator Delaney Martin. "This primal beat that calls to the people of New Orleans and says: Come out and dance, come out and sing, come out and have fun."

Local and national artists were invited to dream up the instruments and structures that inhabit the lot. Taylor Lee Shepherd is a mechanical sculptor who moved to the city after Hurricane Katrina. He's built a singing wall that samples and plays back the voices that fill the home.

"You can start recording people as they come through," Shepherd says. The sounds of little kids or curious grownups — the voices "have all these different texture and rhythms. All mixed together, it sums up a moment in time." 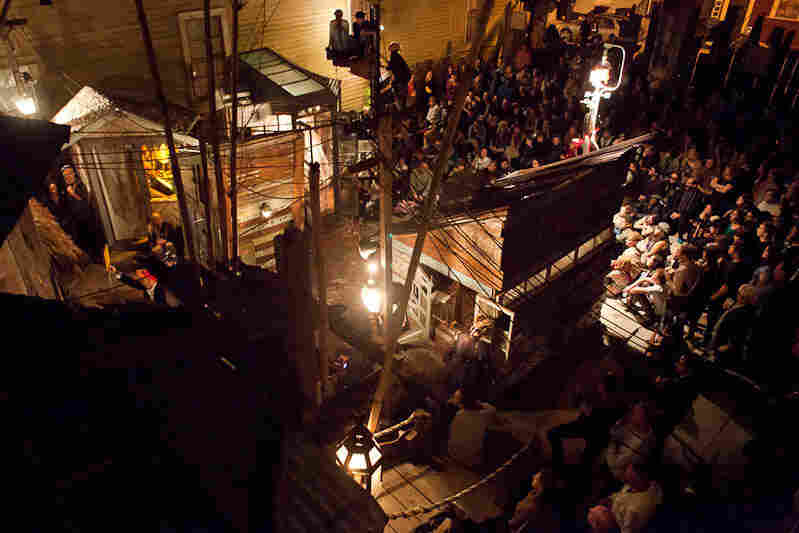 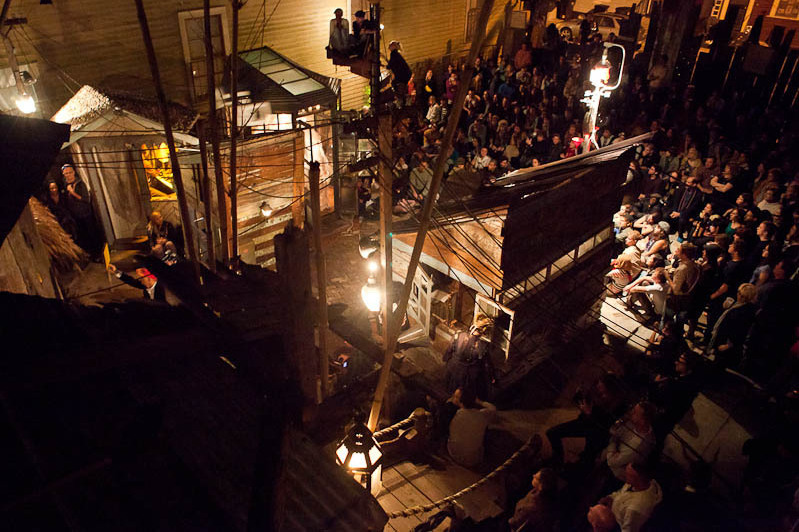 The Shantytown Orchestra performs for a packed audience. Click here to listen to recordings of three recent Music Box performances.

These structures are an experimental first step toward building a fully functional musical house — named "Dithyrambalina" — that will be the headquarters and residency space for the New Orleans Airlift. The organization was created in the aftermath of Katrina to raise the profile of local artists, often through collaborations with more famous creators.

New York-based street artist Callie Curry, known as Swoon, designed the house for Airlift. "I hope it represents this very basic need in people while rebuilding to rebuild joyfully and with imagination," she says.

Transforming that hope into reality by bringing in outsiders is a touchy subject in the city, says associate curator Theo Eliezer, who grew up in New Orleans.

Everyone involved in the project is keenly aware of striking the right balance in a city where the hurricane turned long-term homeowners into renters.

"There is a natural antipathy in this neighborhood about doing anything with a house that is not going to put someone in it to live," says Jay Pennington, Airlift's co-director. "It's something that people are very sensitive about here." 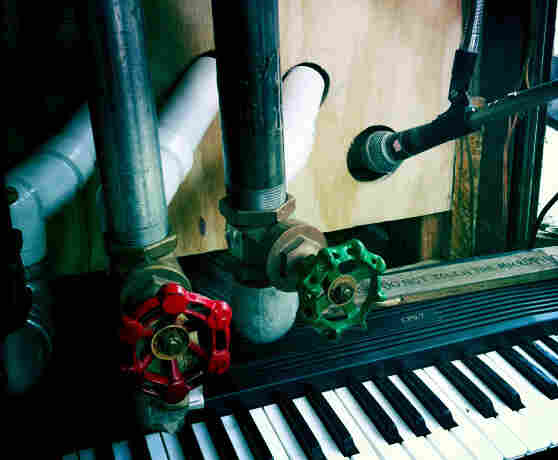 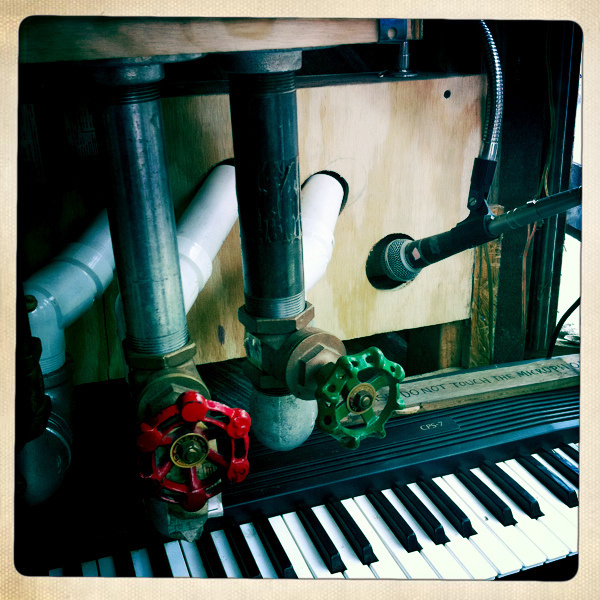 The Water Organ by Jayme Kalal allows visitors to hear a keyboard played through water. Click here to listen.

As the city continues the long process of rebuilding, Pennington and Martin hope the final house will be an example of the beauty that can emerge from all of the destruction.

Martin says that she and her artist friends "can look at an old falling-down house and see a great deal of beauty, a great deal of salvageable materials and a great deal of inspiration." No one wants "blight" — dilapidated structures and scarred landscapes that can potentially encourage crime. But Martin says it would be a terrible shame for these old buildings to be torn down.

"I would hate to see these old, beautiful properties bulldozed and thrown away, and these new developments put in," Martin says. "That's not our neighborhood anymore if we do that. So [The Music Box] was our answer to it ... [it] was important to us to create out of this blight ... a sense of wonder and possibility." 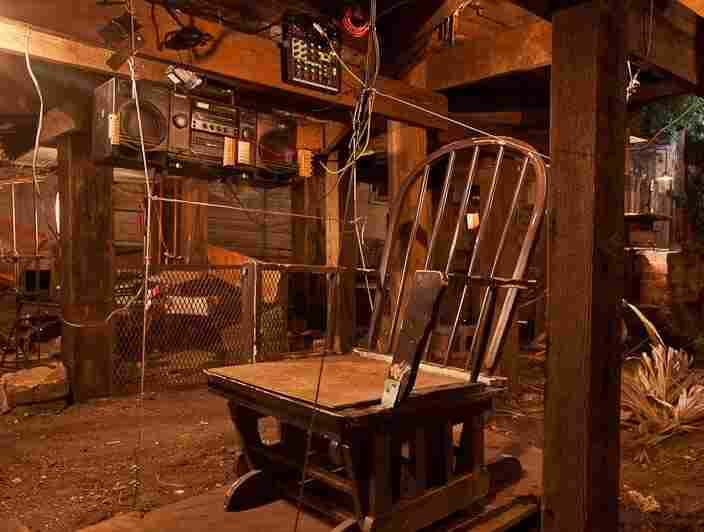 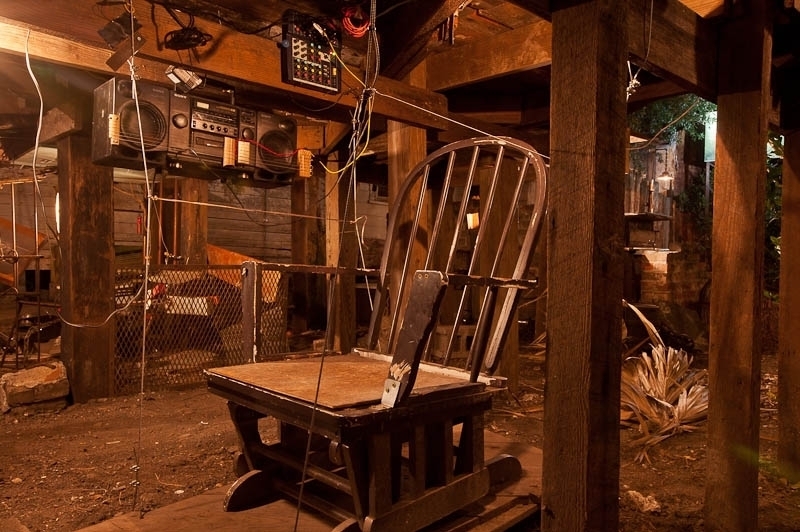 Rocking Chair, by Swiss musician and sound artist Simon Berz, is a rocker rigged with contact mics that create a grinding bass sound when a visitor sits down. Click here to listen.

Fifteen-year-old D'Angelo Faulk is one of about 30 schoolchildren from the New Orleans Center for Creative Arts experiencing that sense of wonder as he tries out a musical rocking chair. He says it's the best music he's ever created on his own — and is impressed by The Music Box.

"It is very artistic, very thoughtful," he says. "I've never seen anything like this, and I live in the neighborhood."

That's the whole point of The Music Box, Martin says: It's powerful to see a once-blighted home resurrected into a "Peter Pan wonderland." She hopes the project will expose New Orleans residents who've endured a devastating hurricane and six years of rebuilding to a sense of opportunity and creativity — and, as one neighbor put it, hope.