Accessibility links
Growing Pressures Prompt Plunge In Iranian Currency Faced with new economic sanctions from the U.S. and Europe, Iran's currency, the rial, seems to be in free fall. Several factors seem to be at work, and analysts say one of them could be government manipulation of the currency market. 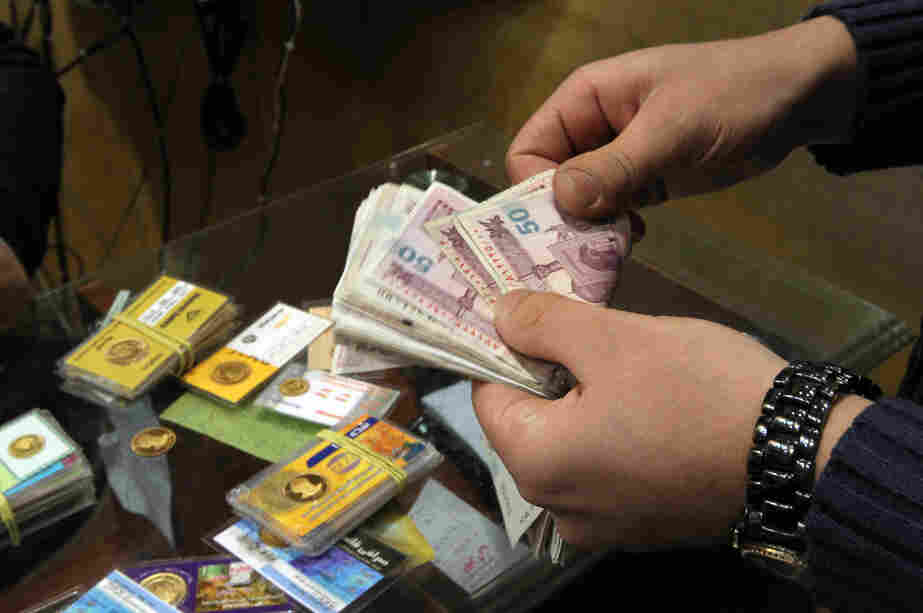 An Iranian man counts banknotes after exchanging a gold coin for cash in Tehran on Monday. Gold coins were being exchanged for over 10 million rials as the Iranian currency continues to lose value against the U.S. dollar. Atta Kenare/AFP/Getty Images hide caption 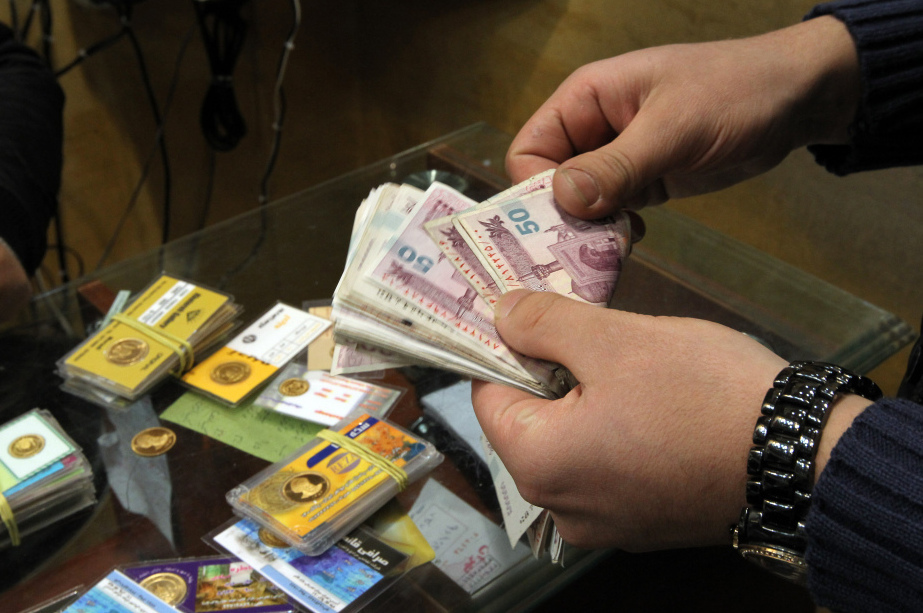 An Iranian man counts banknotes after exchanging a gold coin for cash in Tehran on Monday. Gold coins were being exchanged for over 10 million rials as the Iranian currency continues to lose value against the U.S. dollar.

The value of Iran's currency — which had been sliding steadily for months — took another plunge this week. Faced with new economic sanctions from the U.S. and Europe, the rial now seems to be in free fall.

But at least part of the dive could be linked to currency manipulation by the government itself in an effort to fund candidates in upcoming elections.

In images posted on the Internet, hundreds of Iranians are seen gathered outside the headquarters of the Bank Melli in Tehran Monday. They wanted to buy dollars, but there were no dollars to be had.

It's a classic panic, says Jon Alterman, head of the Middle East program at the Center for Strategic and International Studies in Washington.

"It's hard to find Iranians who have a lot of trust in the future of the rial and a strong belief that they should keep their life savings in rials. That's a pretty big bet and it's not a very good one," Alterman says.

The slide started slowly last fall. For years, a U.S. dollar could buy about 9,000 rials.

Many economists believe Iran's central bank artificially maintained this period of stability. Over the past decade, inflation in Iran has been running at more than 20 percent, but banks were paying only 12 percent interest on deposits.

That meant that depositors were losing something in the neighborhood of 10 percent if they kept their rials in bank accounts.

That should have forced a devaluation of the rial. But it didn't, because Iran's central bank — where billions of dollars from oil sales are deposited — kept injecting dollars into the foreign currency market to maintain a steady rial. 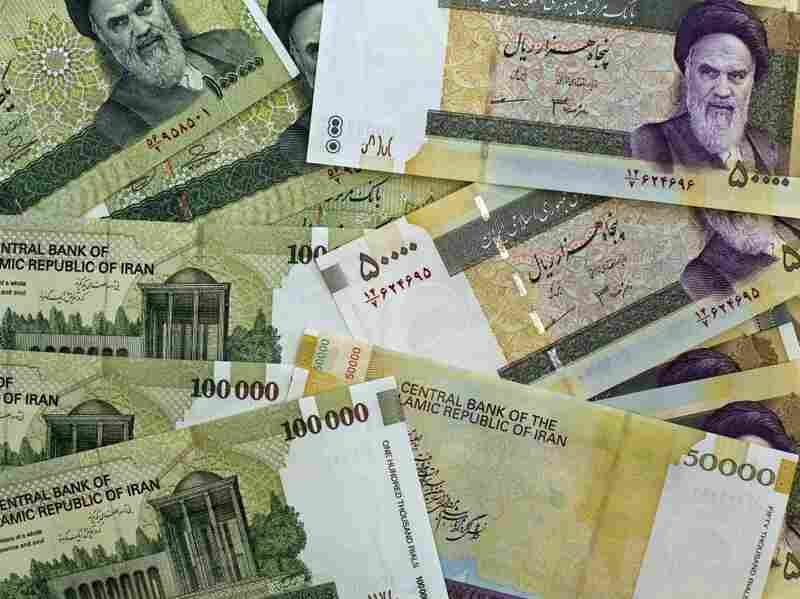 On Jan. 24, the exchange rate plummeted to 23,000 rials to the U.S. dollar. For years, the value of the Iranian currency was artificially maintained. Now, international sanctions and domestic politics are forcing a devaluation. Behrouz Mehri/AFP/Getty Images hide caption 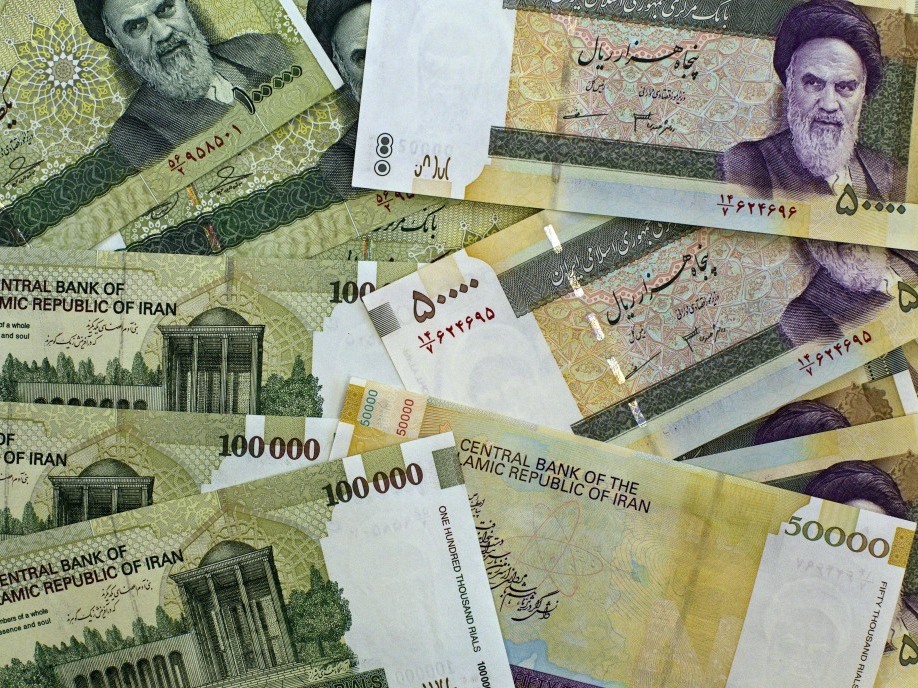 On Jan. 24, the exchange rate plummeted to 23,000 rials to the U.S. dollar. For years, the value of the Iranian currency was artificially maintained. Now, international sanctions and domestic politics are forcing a devaluation.

Pressures On Currency Lead To Panic

Then a number of factors combined to put irresistible pressure on the Iranian currency — Iran's progress in its nuclear program led to talk of war, growing pressure from economic sanctions, closing the Strait of Hormuz.

The slide had begun, and dollars quickly became scarce, says Djavad Salehi-Isfahani of Virginia Tech, an expert on Iran's economy.

"When they thought the dollar is going to become more scarce people rushed to buy these and they basically disappeared from Tehran. Today if you go to a private exchange, these money-changers in Tehran, they'll say, they don't have foreign exchange, they don't have dollars," Salehi-Isfahani says.

Iranians who want to travel outside the country can't buy enough dollars to make the trip. Iranians whose children are studying abroad can't buy dollars to pay for their courses or cover their rent.

Businessmen who import goods from China or Europe can't get the foreign exchange to finance their purchases.

By New Year's, the rial had lost half its value. And Hossein Askari was predicting it could get much worse. Askari is a specialist on the Iranian economy at George Washington University.

"This could be an avalanche. What you've seen over the last month or two is about a 50 percent depreciation. But I think if really panic sets in, it could be several hundred percent," Askari said.

Panic did hit the currency market in Tehran this week, with the threat of new banking sanctions imposed by the United States and a decision by the European Union to stop buying Iran's oil by July 1.

On Tuesday, the exchange rate plummeted to 23,000 rials to the dollar.

Now suspicions have emerged about more hidden causes of the rial's collapse.

According to Muhammad Sahimi, a professor at the University of Southern California, Iranian President Mahmoud Ahmadinejad and his allies have been accumulating a slush fund to use in the upcoming parliamentary, or Majlis, elections in March.

"The Ahmadinejad camp needs cash in order to prop up its candidates for the Majlis election. Obviously they cannot get that cash directly from the treasury. So what they do is because they control the central bank, they withdraw a lot of foreign currency from the market," Sahimi says.

They can then sell the dollars back into the market for twice as many rials, creating, Sahimi says, an enormous slush fund to buy votes in the election.

Many analysts believe Ahmadinejad is seeking a Parliament that supports him, not Iran's supreme leader, Ayatollah Ali Khamenei. In Iran, almost nothing, not even a currency crisis, is separate from domestic politics.