Accessibility links
Obama's Military Tactics: Risky Missions, Elite Units For the president, commando raids and drone attacks are part of a new focus on "low-cost, small presence" military tactics. There have been several recent successes, though analysts are still debating the legality and long-term effectiveness. 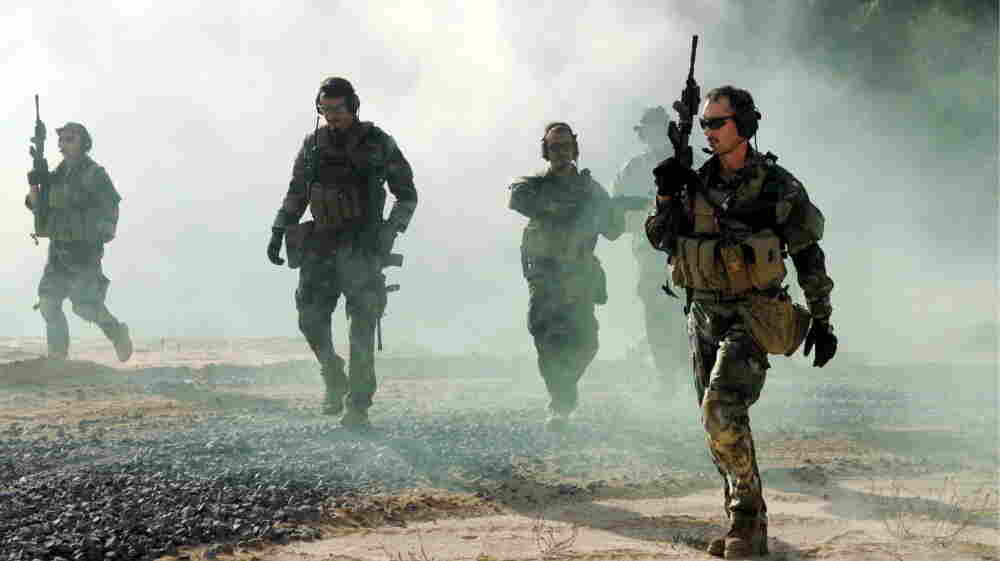 President Obama has called on small, elite military units to carry out several risky operations in the past year, like the hostage rescue this week in Somalia. Here, Navy SEALs are shown during a training exercise at the John C. Stennis Space Center in Mississippi. John Scorza/U.S. Navy hide caption 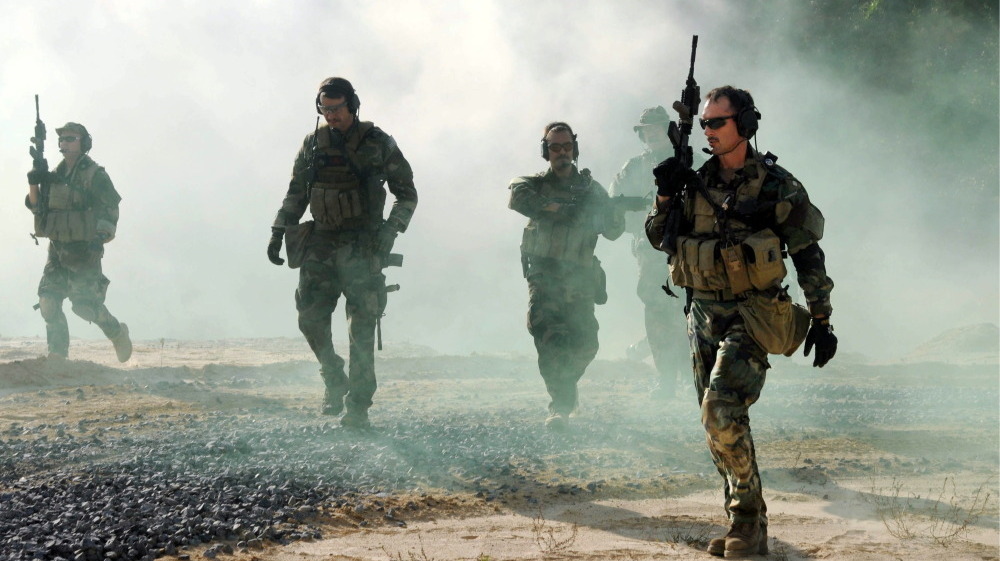 President Obama has called on small, elite military units to carry out several risky operations in the past year, like the hostage rescue this week in Somalia. Here, Navy SEALs are shown during a training exercise at the John C. Stennis Space Center in Mississippi.

President Obama has authorized several risky military missions in the past year and can claim major successes: the killing of Osama bin Laden in Pakistan; the airstrike that killed terrorism suspect Anwar al-Awlaki in Yemen; and the ongoing drone strikes in Pakistan.

The latest operation, a hostage rescue in Somalia carried out by Navy SEALs, is part of a pattern established by a commander in chief who has shown a clear preference for limited, small-scale military action.

The operation freed two aid workers, 32-year-old American Jessica Buchanan and 60-year-old Dane Poul Thisted. It appears to have been a textbook operation in which two teams of commandos swooped in by helicopter, killed at least eight pirates, and recovered the hostages unharmed.

This fits with the military priorities that Obama and his defense team outlined at the Pentagon on Jan. 5, when the president unveiled the results of a new strategic review.

"As we look beyond the wars in Iraq and Afghanistan, and the end of long-term nation-building with large military footprints," Obama said then, "we will be able to ensure our security with smaller conventional ground forces."

A key recommendation of the review was that the Pentagon should come up with "innovative, low-cost, small-presence approaches to achieve security objectives."

That recommendation could apply to tools that the administration is already using, including commando operations, targeted killings of terrorist leaders and drone attacks.

For all the recent successes, these missions come with questions — questions about the long-term effectiveness, the way the operations are perceived at home and abroad, and their legality.

"It's part of a broader shift in how we engage in war," says Peter Singer, director of the 21st Century Defense Initiative at the Brookings Institution. "The bottom line is 'no more Iraqs, no more Afghanistans,' no more large-scale commitments in terms of troops on the ground or time on the ground."

Singer says many policymakers and strategists don't think the U.S. can sustain large-scale operations in what some are calling "an era of persistent conflicts." 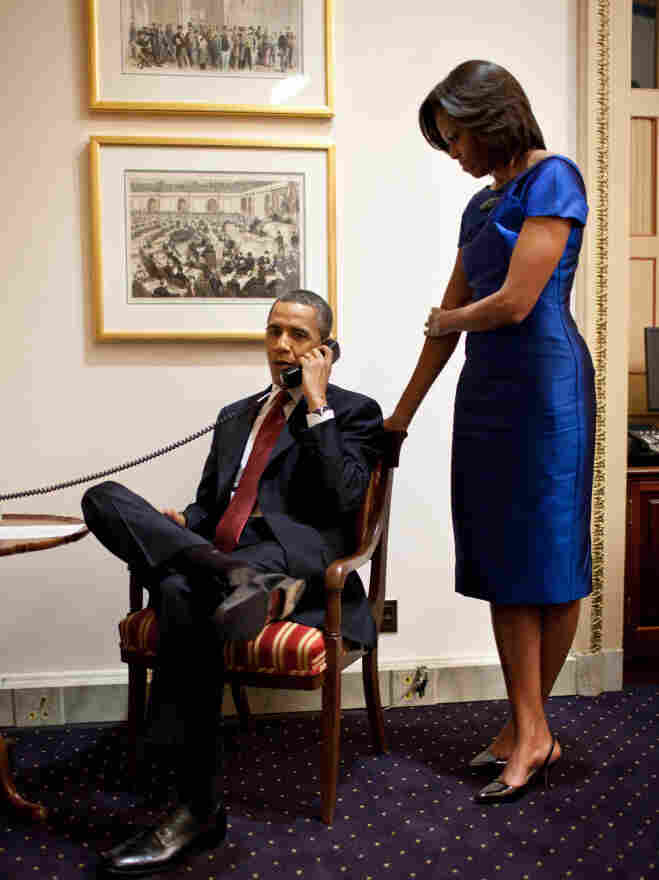 With first lady Michelle Obama looking on, President Obama speaks Tuesday with the father of Jessica Buchanan. She is the American aid worker who was rescued from Somali pirates after being held for three months. Pete Souza/AP hide caption 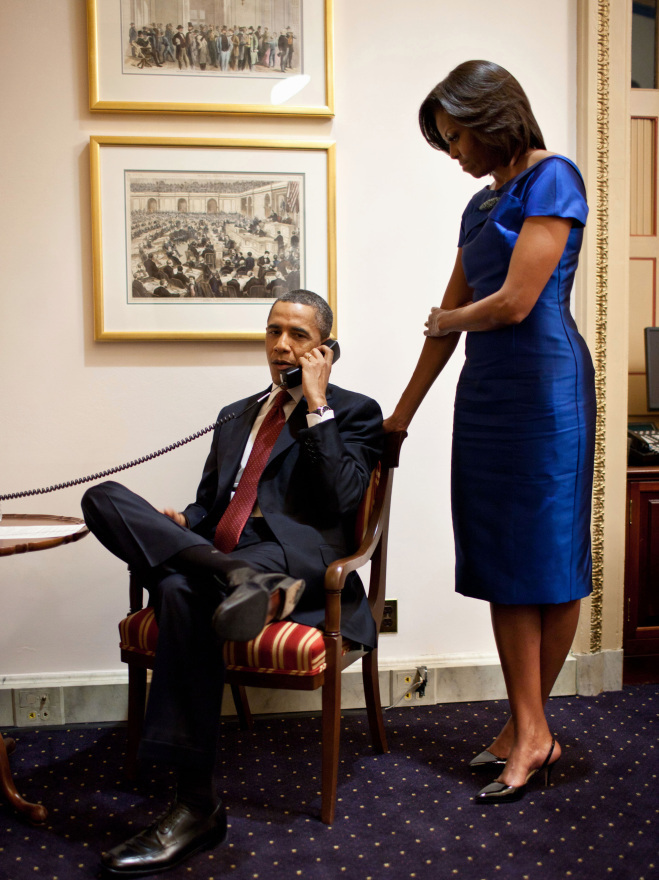 With first lady Michelle Obama looking on, President Obama speaks Tuesday with the father of Jessica Buchanan. She is the American aid worker who was rescued from Somali pirates after being held for three months.

"For instance, people question whether territorial seizure is a good strategy in a worldwide conflict against nonstate actors," Singer says.

Stephen Biddle, a senior fellow for defense policy at the Council on Foreign Relations, says, "There's an increasing emphasis on using lower-cost tools, but it's not as high a payoff as most people suggest."

As an example, Biddle notes that the U.S. can reduce the short-term effectiveness of terrorist groups by killing their leaders, as it has done in Yemen and Pakistan.

"But when you kill the first string [of leaders], they are replaced by the second string, which is often younger, more radical, and not so open to negotiated solutions," he says.

Biddle also says that even relatively precise strikes can end up killing civilians, which alienates the population and leads to longer, more drawn-out conflicts.

Sometimes "it can make sense to decide that you only want to invest so much, and you're willing accept that you may not get exactly what you want," Biddle says. But "your ability to control the political result goes down, the smaller the investment that you make."

Still, Biddle says the strategy can have benefits where the United States may not have an overwhelming interest, but has a political need to appear strong.

"In the U.S., presidents are very reluctant to be seen as sitting on their hands and doing nothing while a catastrophe occurs," he says. "The appeal of these airstrikes and drones ... is that it gives you an opportunity to do something without all the cost."

Analysts say the strategy is in keeping with the changing attitudes of Americans who are tired after a decade of wars.

Singer cites a survey conducted by the Brookings Institution last winter, which sought to determine the views of future leaders from the so-called millennial generation — people born after 1980.

The appeal of these airstrikes and drones ... is that it gives you an opportunity to do something without all the cost.

Stephen Biddle of the Council on Foreign Relations

The survey of more than 1,000 young people considered leaders by their peers found that 58 percent of them felt that the U.S. was "too involved in global affairs," Singer says. "That's roughly double the rate of isolationism as in other generations."

It's Cheap, But Is It Legal?

While the Somalia raid bears some tactical resemblances to the SEAL team mission that killed Osama bin Laden in Pakistan last May, some observers noted that they do raise different legal questions.

Legally speaking, the Somalia raid "is more defensible than many of the other types of activities that we're talking about," says Gregory McNeal, an associate professor of law at Pepperdine University.

McNeal says that because it's a hostage rescue, it's roughly equivalent to the attempted rescue of the American hostages in Iran in 1980.

Although that rescue mission failed, it led to the passage of a law known as the American Hostage Act, in which Congress stated that the president has the authority to take whatever action is necessary, short of an act of war, to protect American citizens.

Rescue is "the category I'd like to put it in, because it's a limited use of force under international law," says Mary Ellen O'Connell, a professor of law at Notre Dame.

But O'Connell says there are aspects of the case that make her hesitate. "For one thing, it looks like [nearly all] of the captors were killed. Did they really have to be killed? I'd want to know what the SEALs' orders were and see their after-action report."

O'Connell noted that in hostage cases in the U.S., law enforcement officers would be held to strict guidelines regarding excessive use of force.

In any case, O'Connell says the real question is whether the government is using these new strategies in a way that's in keeping with international law. "I'm always asking the administration, 'Where is your legal authority for carrying out military operations where the U.S. is not at war — Yemen, Somalia, Pakistan?"

"Why doesn't the U.S. president move us back to a law-abiding, world-leading position, as many people thought he was going to do?" she asks.

Koh told a conference of international lawyers that the U.S. was in armed conflict with al-Qaida, the Taliban and other groups "in response to the horrific acts of 9/11, and may use force consistent with its right to self-defense under international law."